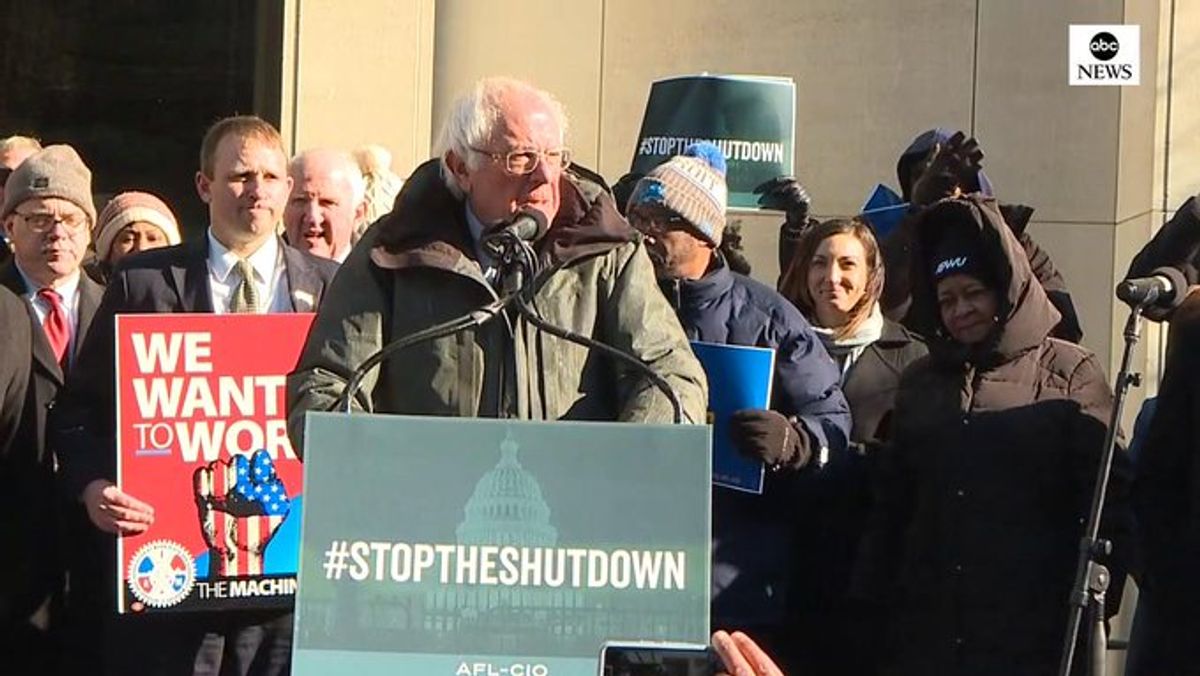 Federal workers, government contractors, and the unions that represent them rallied in Washington on Thursday to pressure President Donald Trump and Senate Majority Leader Mitch McConnell to end the ongoing government shutdown, which is just days away from becoming the longest in U.S. history.

As the president continues his "temper tantrum" over $5.7 billion in funding for his "ridiculous" wall along the U.S.-Mexico border — which Democratic lawmakers and the majority of Americans have consistently opposed — the 800,000 federal employees who aren't getting paid during the shutdown are calling on the GOP-led Senate to pass spending legislation approved by the Democratic House to reopen the government, with or without Trump's support.

Workers, union leaders and members of Congress gathered at the AFL-CIO's D.C. headquarters to deliver speeches, and marched to the White House carrying signs that said #StopTheShutdown and "Congress: Do your job so we can do ours."

"Stop holding 800,000 federal employees and their families hostage!" one employee from the U.S. Department of Housing and Urban Development (HUD) said in a rally speech that captured the demonstrators' main message to Trump and McConnell.

The Republican Senate majority leader has been accused of subservience to the president and has refused to allow senators to vote on a bill to end the shutdown, despite frustration even among members of his own party.

In addition to the main event in the nation's capital, federal employees and unions also organized solidarity demonstrations in other cities across the country.

Some federal lawmakers outraged by what many are calling the #TrumpShutdown joined the protests. Addressing the rally in Washington, Sen. Bernie Sanders, I-Vt., said, "It is unbelievable that we have a president who is prepared to deny basic governmental services to millions of Americans who need those services, so today we say to this president, 'Grow up, do your job, end this shutdown.'"

While workers rallied in Washington and beyond, Trump traveled to Texas to promote his wall proposal amid mounting concerns that he will declare a national emergency. Many legal experts say he has no constitutional authority to use such a declaration as a way to redirect military funds for a project not approved by Congress.

AFL-CIO president Richard Trumka declared at the Washington demonstration on Thursday that "instead of going to the border for a photo op," the president "should be on Capitol Hill negotiating."