Lessons from Watergate: How Democrats can finally turn Donald Trump's own voters against president 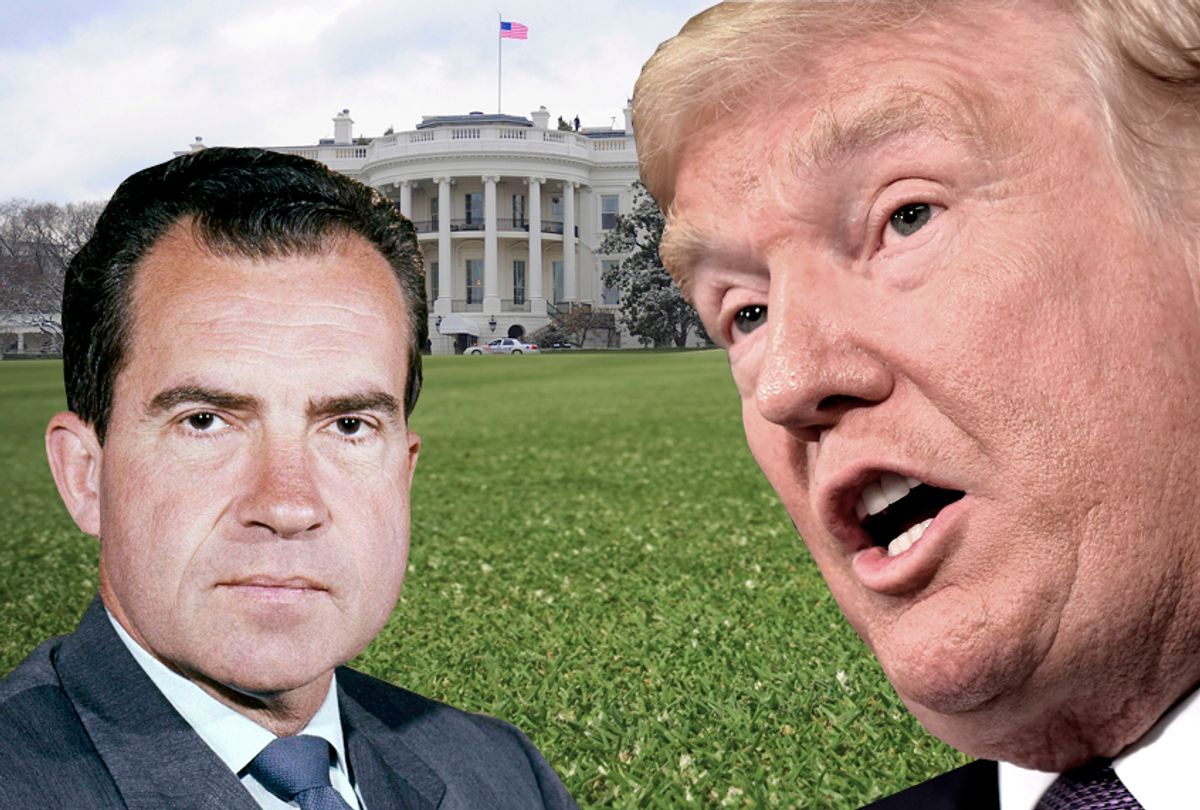 House Democrats can finally rein in Donald Trump through their many planned investigations if the hearings are televised.  Televised hearings could erode Trump’s base to the point where Republicans no longer need it to get elected. That’s what happened to Richard Nixon when 85 percent of U.S. households watched the Watergate hearings. Variety called them “the hottest daytime soap opera.”

Nixon had a 68 percent Gallup Poll approval rating when he started his second term in 1973. Then, on May 18, the Senate began nationally televised Watergate hearings. By July 27,1974, when the House Judiciary Committee passed its first article of impeachment charging obstruction of justice, Nixon’s approval ratings had dropped to 24 percent, and fully 57 precent believed he should be removed from office.

“Trumpgate” hearings should be even more impactful because Trump’s transgressions make Nixon look like he didn’t return a library book on time. Trumpers are sure to tune in.  In fact, ratings data suggest they already are. As of October 30, Fox News, the most Trump-supportive news channel, had 2,829,000 prime time daily viewers to MSNBC’s 1,575,000 and CNN’s 931,000.

Televised hearings would force-feed Trump supporters facts they don’t get from Trump-touting news outlets they follow. In 2016 Trump did better in counties with the lowest news subscription rates. This allowed Trump to exploit local TV and radio stations where Sinclair Broadcasting aired Trump interviews without commentary or fact checks; his bluster and rhetoric went un-challenged. His tweets reach more than 35 million followers, far exceeding the number of subscribers to all print and digital US news outlets.

Pro-Trump media allowed the president to become the most trusted source of news for his base — televised hearings are necessary to counter the doctrine they’ve been listening to.

A good start would be House Intelligence Committee Chairman Adam Schiff’s plan to reopen the Russian meddling investigation that was shut down by Republican Chairman Devin Nunes and to expose that investigation as a charade designed to protect Trump.

Schiff’s probe could possibly link EU and US regulators’ punishment of Deutsche Bank for laundering billions from Moscow to the $75 million Trump borrowed from DB after he defaulted on a $330 million loan. Author Craig Unger could provide backup for writing that Trump has used his properties to launder perhaps billions for the Russians.

And there’s no telling what Trump tax returns could reveal.

Other hearings could also explore Trump’s suspected money laundering. His golf courses in Ireland and Scotland have shown consistent losses, yet received hundreds of millions of dollars from unknown sources. House committees could require Donald Trump Jr. to identify the Russian sources he said “make up a … disproportionate cross-section of … our assets,” and the sources of the money he referred to when he said “We see a lot of money pouring in from Russia.” (Steve Bannon once predicted, “They’re going to crack Don junior like an egg on national TV.”)

They could ask Eric Trump what he meant by, “We don’t rely on American banks; we have all the funding we need out of Russia.” He later denied that he said it — but will he continue to deny it under oath?

Jared Kushner should testify as to why, after Qatar refused  his father’s request for a loan for troubled 666 Fifth Avenue, Jared backed a trade blockade of Qatar and Trump called Qatar a “funder of terror.”  A few months later, a fund in which Qatar is a large investor loaned $184 million to refinance another distressed Trump office building. Two months after that, Trump praised Qatar’s fight against terrorism and called for a quick resolution of the blockade.

Viewers will wonder whether Trump’s refusal to punish Saudi Arabia or its Crown Prince Mohammed bin Salman for the murder and dismemberment of Washington Post journalist Jamal Khashoggi was influenced by Trump’s admitted receipt of hundreds of millions of dollars from Saudi sources. These conflicts of interest and his stakes in over 500 businesses in foreign countries will be seen as reason for him to compromise foreign policy for his own financial gain.

Televised hearings should resonate enough with Trump’s base to overwhelm any appeal of his policies and counter the effectiveness of his bluster. His supporters would finally have a fact-based forum in which they can ask themselves if they really want this man to be our president.

Neil Baron is an attorney who has represented many institutions involved in the international markets and advised various parts of the federal government on economic issues.