Mitch McConnell has the power to shut down the shutdown: So why isn't he?

By letting Trump drag out the shutdown, McConnell hurts not just Americans, but his own party and even Trump 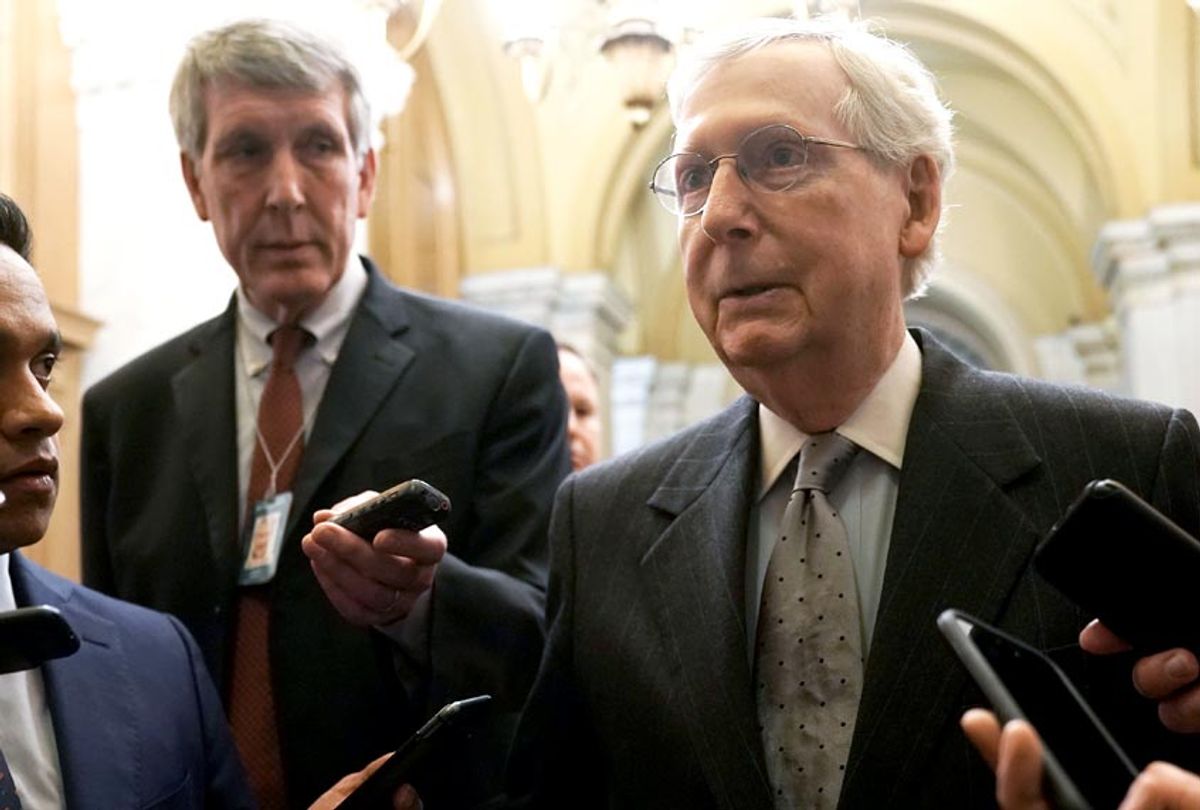 U.S. Senate Majority Leader Sen. Mitch McConnell (R-KY) speaks to members of the media after he returned to the U.S. Capitol from a meeting at the White House January 9, 2019 in Washington. (Getty/Alex Wong)
--

Donald Trump, every inch the spoiled rich kid whose parents never told him "no," is digging in his heels on the government shutdown, too afraid that the talking heads at Fox News will express disapproval of him to admit that there isn't going to be any border wall. Fox News, as I have previously suggested, could fix this situation simply by providing Trump a face-saving lie, such as "the wall is already being built," to placate the base and move on with his life. But the expensively-coiffed Fox hosts are not the only people who have leverage over the spoiled toddler in the White House.

Senate Majority Leader Mitch McConnell, if he wanted to, could probably end this shutdown easily. Instead, he's actively backing Trump's tantrum. On Thursday, McConnell refused even to bring a bill to the Senate floor that could reopen the government, holding to the line that he doesn't want to pass something Trump will veto.

Much of the media has been portraying McConnell as a bit actor in the shutdown drama, with the word "sidelines" being bandied about.

Even the left-leaning Raw Story ran a headline describing McConnell as "powerless" in the face of Trump's tantrum.

But McConnell is  not even remotely powerless. Senate Minority Leader Chuck Schumer may be a dominant presence on cable news and in White House meetings over the shutdown, but he is not, in fact, in charge of the Senate. McConnell is.

McConnell could take swift action to box Trump in and stop this shutdown by calling a vote on the House bill to end the shutdown, a bill that the Senate already passed in December with a voice vote. Not only would that bill likely pass, it  might, as Sherrilyn Ifill of the NAACP Legal Defense and Educational Fund argued on Twitter, have enough votes to be veto-proof.

Even if that's not the case, passing this bill would likely help end the shutdown more quickly. Sending a bill to Trump's desk would signal to the embattled president that he's got no real support and no real leverage. It would put Trump in a situation where he'd either have to sign a bill that had easily passed both houses of Congress or become the sole owner of the shutdown. Even if Trump is dumb enough to go there, which is always a possibility with the 45th president, McConnell always has the option of threatening to keep on sending bills to the White House until Trump gives up.

Instead, McConnell is letting the senators go home without passing a bill to reopen the government.

McConnell may be a nasty character with no moral compass to speak of, but he's no idiot. So his failure to act here is baffling. McConnell's entire life is built around protecting the Republican Party's death grip on power, and he has to know that this shutdown is one of the few things that might actually cause the unblinkingly loyal Republican voters in red states to blink, as they are personally affected by the shutdown.

That's why McConnnell has always worked to rein in his own party's lunatic wing, which is always looking for exciting new reasons to shut down the government. He knows that while the word "shutdown" gets the juices flowing in the Fox News audience, shutdowns, like many other exotic practices, are better experienced as fantasies instead of lived realities.

So why isn't he doing more to end this particular shutdown? Why not pick up the phone and let Trump know that, while he's had his fun, at this point the shutdown is only hurting his presidency and the entire Republican Party in the polls and it's time to find a way to move on? Maybe they can get Sean Hannity to tell his viewers that the wall's already built, as Trump himself has claimed from time to time. Why not force the president's hand, if he continues to be a whiny brat about this?

It is worth noting that McConnell's wife, Elaine Chao, is a member of Trump's Cabinet, as secretary of transportation. Which isn't to say that Trump is directly holding Chao's job over the head of the Senate majority leader. But it's undeniably tougher for McConnell to play hardball with the guy who is literally his wife's boss.

Another possibility is that McConnell is caught up in the myth of "Teflon Don," that being the notion that nothing Trump could ever do will shake his popularity with the all-important base, and that Republican politicians can only lose with said base if they go up against Trump. After all, Republicans continue to control the Senate -- even expanding their majority in the November midterms -- while continually getting millions fewer votes than Democrats, because the rural areas that love Trump are drastically overrepresented in Congress.

If that's McConnell's calculation, though, he's making a big mistake. The "Teflon Don" effect actually points to the way forward for Trump and the Republicans: End the shutdown and simply declare victory by arguing that existing fencing (or planned repairs and renovations) constitutes a "wall." The base, ever ready to rationalize anything Dear Leader does, will play along, especially since the wall has always been more of a symbol than a substantive policy issue.

The shutdown, however, impacts real people, who depend on the government — especially those in rural areas that basically run on federal farm loans or smaller communities built around large federal employers. In the swing state of Florida, federal prison workers held a protest in Tallahassee on Thursday, denouncing a government that expects them to work without paychecks. The longer the shutdown goes on, the harder it will be for Trump's support in areas like that to rebound.

Both Fox News and McConnell act as if they're helping Trump by backing this shutdown. They're not. Trump's approval rating is tanking during the shutdown, and his increasingly incoherent rationalizations for wanting the wall have become so embarrassing that even Fox News cut away from a Trump event promoting the wall, rather than expose their audience to the weirdness. The sooner this ends and Trump can move onto his next bout of bizarre, headline-grabbing behavior, the better it is for his declining re-election prospects.

This is one of those extremely rare occasions where what's good for Trump, what's good for the Republicans and what's good for the country all align. The shutdown is a disaster for all of the above. Mitch McConnell has the power to make it stop. And it frankly makes no sense that he won't suck it up and do what needs to be done.