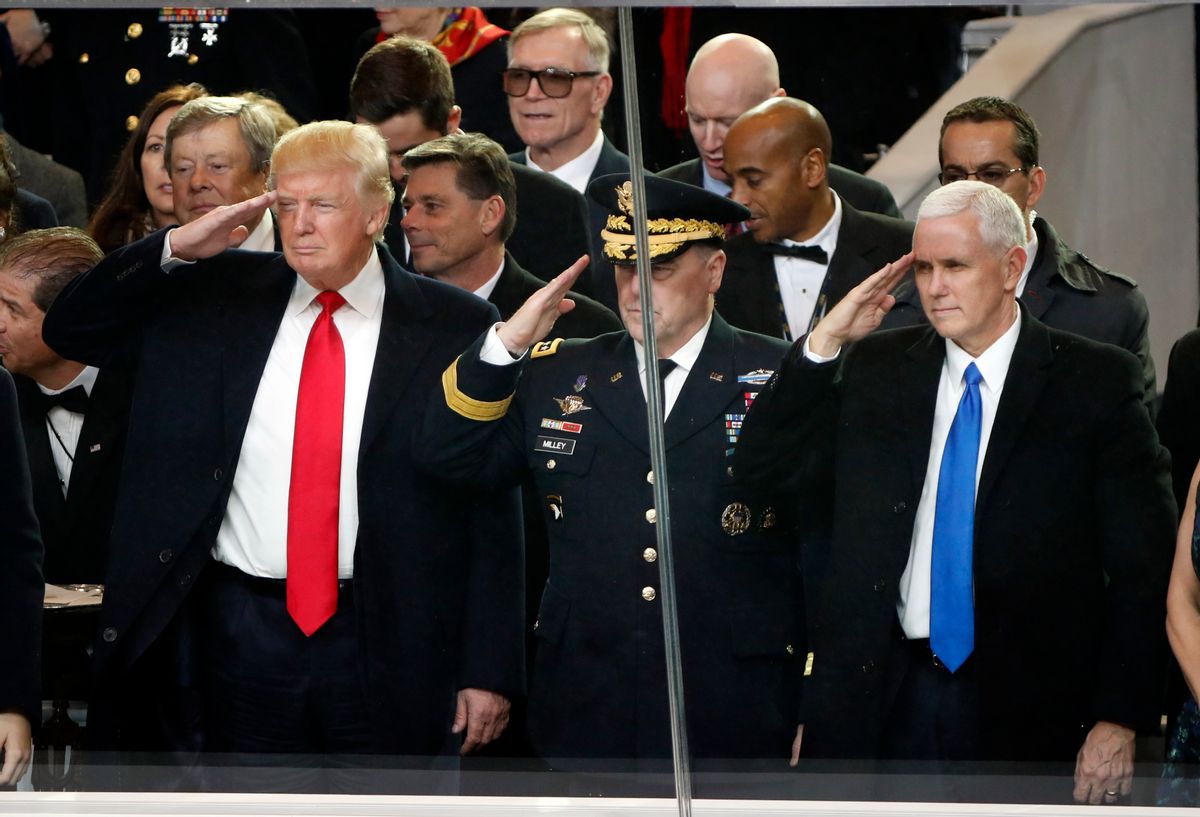 For all his presumed interest in “his” generals, Trump’s love affair with his country’s military top brass is over. Secretary of Defense James Mattis became the latest general to depart.

The major offense committed by these former military leaders is that they, along with
other retired military brass, have had the audacity, at least in off-the-record conversations with journalists and book authors, to publicly criticized him and Trump.

Predictably enough for this child-president, Trump then promptly lashed out, calling them names and claiming they are political hacks in bed with the Democrats.

How Trump sells out the U.S.

But these are only the opening salvos in Trump’s war on the military. The U.S. President’s unbelievable derelection of duty has been that he has been mouthing Putin talking points on a variety of key issues.

These range from the hacking of U.S. elections to Russia’s annexation of Crimea. Most recently, he even parroted Putin’s revisionist view of the Soviet invasion of Afghanistan.

Considering that in contemporary Russia, at the direction of Vladimir Putin, Stalin’s image is being busily burnished, no one should be surprised if Donald Trump took a page from Stalin’s book with regard to his own dealings with America’s generals.

Trump and Stalin have a lot in common

In fact, in many ways Trump and Stalin already have a lot in common. Although few people remember given his subsequent omnipotence, Stalin — like Trump — was an accidental ruler. He rose to the pinnacle of power totally unexpectedly.

A decade before he managed to consolidate control over Soviet Russia, Stalin had been an obscure socialist trouble-maker. Trump similarly had been known for most of his life as a buffoonish self-aggrandizing socialite with a big mouth.

Both Stalin and Trump are united not just in their complete contempt for democracy, but even more so in a penchant for over-the-top flattery and authoritarian tendencies.

Notably, neither Stalin nor Trump ever served in the military. To his credit, Stalin had a real disability — a shrivelled arm as a result of childhood polio — whereas Trump malingered his way out of Vietnam thanks to bogus bone spurs.

His disability did not keep Stalin from having a burning ambition to be a military hero, like Trotsky – his fierce rival – actually did in the throes of the revolution.

No surprise then that during WWII, Stalin greatly relished his role as the Supreme Commander of the Red Army, especially when the war turned in Russia’s favor. An apt military commander he was not. Like Hitler, Stalin kept giving orders to his generals which often resulted in massive loss of life for soldiers in the field.

After the war, Stalin pushed aside his victorious generals and claimed the lion’s share of honors for the victory. He grandiosely bestowed the rank of Generalissimo upon himself and was portrayed wearing a military uniform with an enormous gold star on his epaulets.

Trump loves the military as well. He wants to prove his battle readiness by wanting to hold a military parade in Washington, D.C. Underscoring his own sense of deficiency, Trump has on numerous occasions announced that he’s smarter than his generals.

Trump is also claiming victory over ISIS, boasting that he had defeated it. What he left unexplained was how that had been possible, given that he also accused his generals of incompetence and time-wasting.

Channeling his inner Stalin, Trump has declared that he would make a great general himself. Given Trump’s age, it may actually be amusing to see senile old civilians play generals.

But it is not all innocent fun and games. U.S. generals should watch their backs. They would be well-advised to remember how trump’s soul mate, Joseph Stalin, was extremely jealous of the military leaders who won the Russian Civil War that followed the Russian revolution.

As a sign of his special appreciation, Stalin executed three of the first five Marshals of the Soviet Union — Blyukher, Tukhachevsky and Yegorov.

Next, during the massive military purges during 1937-39, thousands of high-ranking officers were executed or sent to labor camps. These included some of the best, battle-hardened military commanders of the era and extremely competent military strategists.

Aside from Stalin’s vainglorious ambitions, there was a real political reason for the purge. The Red Army was highly respected at the time and the five Marshals were national heroes. The Russian military was rightfully considered a potential center of resistance to Stalin as he built up his dictatorship.

The new Red Army commanders that took over after Stalin’s pre-WWII purges turned out to be incompetent, as was revealed already during the Winter War against Finland in 1940 and especially when Hitler attacked the USSR in 1941. Their one to Stalin “redeeming” virtue was domestic and political: They were loyal to Stalin.

Opinion polls show that U.S. veterans and active duty personnel were part of Trump’s voter base in 2016. But Trump demands personal fealty, whereas U.S. soldiers are loyal to the U.S. Constitution — and not the President.

Trump’s attacks on Mattis, his insults to prisoners of war and his use of a visit to Iraq to stage a blatantly partisan political rally is turning the officer corps against him.

The same is true of his stream of very troubling orders – such as withdrawing from Syria, abandoning allies and deploying soldiers on the United States’s southern border. They wer all made without proper consultations.

If push ever came to shove, the only force that could stop Trump if he ever actively tried to violate the Constitution would not be the Democrats, but probably the U.S. military. This could happen, for example, by Trump using a bogus state of emergency to grab special powers. Since top commanders have increasingly had it with him, their resistance becomes more likely.

So don’t be surprised if Trump’s firing of “his” generals over recent months translates into a purge of top Army brass. It fits the picture that the man currently serving as acting Secretary of Defense is a civilian with a military contractor background who owes his elevation to Trump.

Will U.S. generals stand by meekly as their heads roll? In Russia, men who bravely fought in WWI and at the numerous fronts of the Civil War not only went to the slaughter like cattle, but cracked under torture. They even ended up signing preposterous confessions that falsely implicated their brother officers in nonexistent plots.

Marshal Blyukher, a peasant’s son, was the only one who didn’t yield under torture, admitted nothing and was beaten to death at the Lubyanka prison some time in 1938.