Timothy Snyder on the shutdown showdown: Donald Trump is the national emergency

Yale historian on Donald Trump's next play: Replace democracy with "a regime in a permanent state of emergency" 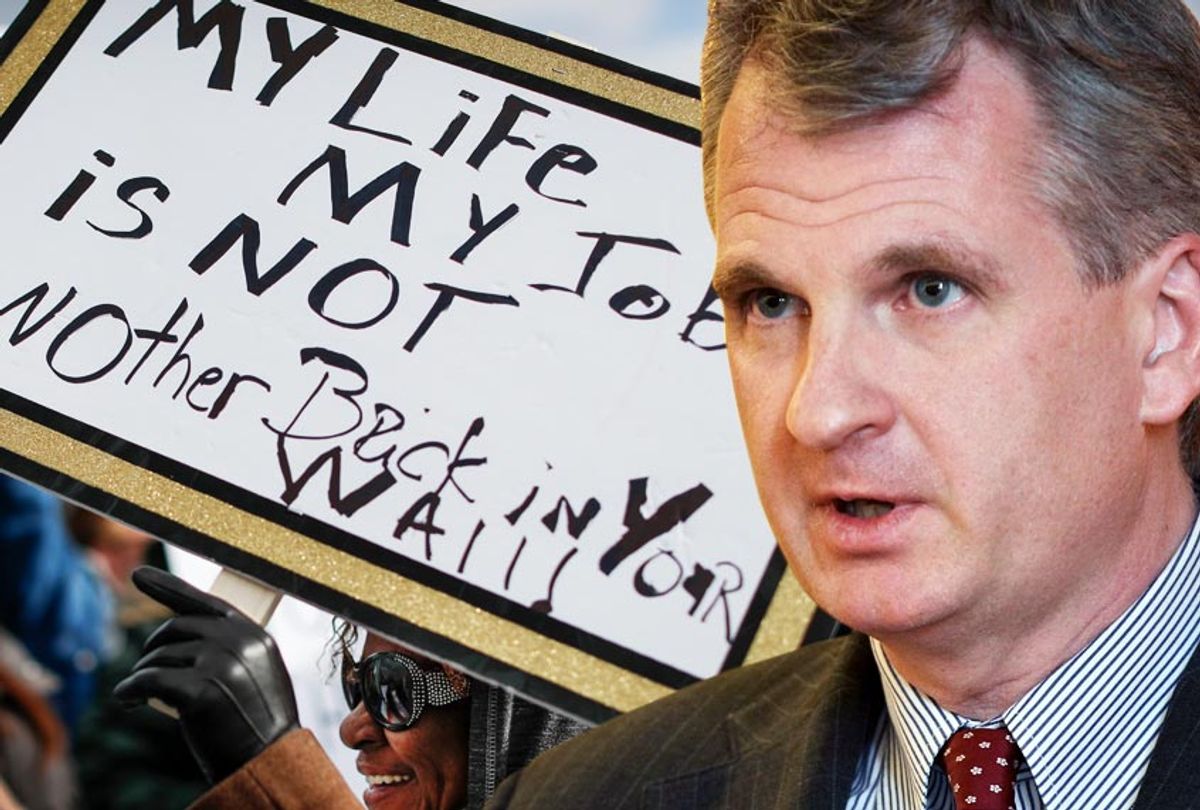 The U.S. government has now been partially shut down for three weeks, the longest such closure in our nation's history. What began as an act of brinksmanship and political hostage-taking by Donald Trump in an effort to extort billions of dollars for his wall along the Mexican border has spiraled out of control.

Trump and the Republican Party's gambit has left almost a million federal employees without pay, created a situation where some federal employees may even be made homeless, imperiled public safety -- including the country's food supply -- and in total betrayed the common good and the president's oath to protect the well-being of the country. When asked about the harm his shutdown of the federal government is doing to the American people Trump reportedly told Democratic Party leaders, “Then you won’t give me what I want.”

Trump has now escalated his manufactured crisis by threatening to impose a state of national emergency. on the United States. Given that he has repeatedly shown that he is an aspiring tyrant and an authoritarian, such a move would be one more action among many against the U.S. Constitution and the rule of law, the twin bedrocks of American democracy.

How would a "national emergency" further Donald Trump's goals of expanding his power? If such an emergency were invoked by this president, how would it ever end? Trump's shutdown of the federal government and his policies more generally have caused great pain to his own supporters, yet they continue to enthusiastically back him. Why is this? How are Trump's efforts to undermine democracy and break the federal government part of a larger strategy by Republicans and other conservatives to remake American society?

In an effort to answer these questions, I recently spoke with Timothy Snyder, professor of history at Yale University and author of "The Road to Unfreedom" and his recent bestseller "On Tyranny: Twenty Lessons from the Twentieth Century."

If you were to give a grade to American democracy in this third year of Trump's presidency, what would it be?

Then there are people who are doing a wonderful job, such as the many investigative reporters, the Mueller investigators, some of our legislators. I would also include the people who ran for office last fall even knowing that they were likely to lose but ran anyway because they wanted to get important ideas our into the public conversation.

As a country the United States has not failed, but there is  literally nobody in the world who looks at this country and says, "Oh, you are doing a great job with your democracy there."

How would you assess the so-called guardrails of democracy, those "checks and balances" such as the free press?

I don't believe in those kinds of metaphors. I also do not really like "checks and balances" because it makes government and democracy sound like Newtonian physics where there are rules which govern behavior and outcomes. I think that in a democracy the people are the real checks and balances. If we the people choose not to be active then the institutions will slowly -- or perhaps even actually more quickly than we expect -- fall apart.

The framers did not believe that matters would work on their own, that everything would naturally be healthy in America's democracy. The people have to work to sustain these institutions and there are Americans who are taking up that challenge. This gives me hope for the future.

The idea of "the exception" is the most dangerous idea for modern democracies and modern rule of law systems. If you want democracy, you have to have the rule of law. Rules help to create normalcy.

When the president starts talking about a "state of exception," then one should be aware that Donald Trump is working in a tradition, and the tradition is one which says you use the exception to open an aperture, and then you try to make that opening bigger and bigger and bigger.

I'm not saying it will work. But that is what Donald Trump is attempting. Another part of this tradition is that the emergency is fictional. For example, the burning of the Reichstag [in February 1933], which allowed Hitler and the Nazis to take power. To this day historians are not entirely sure what happened. There was no real emergency. It was fictional.

Trump and others claim that asylum-seekers at the U.S.-Mexico border -- people whom which we ourselves are putting into abysmal conditions -- is an emergency. Ultimately, the idea of "the exception" is an opening, and into that opening the things that we care about in American democracy, and American society more generally, will begin to disappear. The things many Americans take for granted will disappear into that aperture, that hole which Donald Trump has created and is trying to pry open even farther.

When you have a leader like Donald Trump with his personality type and values, does the national emergency ever end once it is declared?

But in the case of Mr. Trump I think you have a point about the role of his personality which is that he has repeatedly expressed his contempt for the normality of the rule of law. Donald Trump is a person whose entire life, even before he entered politics, was basically against the law. Donald Trump has lived his life flouting the law.

One can hope that this all eventually catches up with Donald Trump, but it has not yet. This makes Trump a very peculiar case as president of the United States because he does not really believe in the idea of the state. He's against the state. He's against rules, and as president he's made it very clear that he doesn't like the rule-bound leaders. Trump doesn't like the Merkels and the Macrons. Trump does not like the people who win elections and believe in  democratic constitutions and rules and institutions. Donald Trump likes the law breakers such as Putin and Erdogan.

Donald Trump says that he admires the fact that President Xi in China has done away with their succession principle. Trump publicly jokes that that's what he would like for himself. I take Trump seriously when he says that. That is what Donald Trump thinks would be normal for him, which is not to be a president of the constitutional government, but the leader of a regime which is in a permanent state of emergency.

This does not mean that Donald Trump would be able to do it.  But we should not take his claims lightly.

This government shutdown by Donald Trump and the Republican Party must also be located within and relative to their decades-long project of totally discrediting and trying to sabotage the very idea of government, both from within and without.

I think you're right in that this is fundamentally about lowering expectations about what government can do on a day-to-day basis. These are the things that matter such as schools, pensions, health care, roads, the clean water, clean air and the like.

The ideological project is to reduce our expectations about things like that and to train the public for what government is ostensibly really about, which are dramatic steps such as invading random third countries and responding to highly resonant if perhaps fictional threats. The government is akin to the Hollywood hero who kind of springs onto the scene, as opposed to the government which is the hard-working institution that actually makes it possible to live decently.

This "government by exception" isn't going to be capable of doing much, right? It's not even going to build a wall.

But instead the public and media are spending time and energy talking about things which are fake emergencies -- which by definition cannot be solved because they are fake.

Trump and his enablers' new move is to claim that his wall is not literal but instead is a metaphor. What type of political work is being done there?

Let me give you an obvious answer and maybe a less obvious one. "Build that wall" is a classic, fascist way to divide tribes. The fantasy is that there actually is a clean division between one group of people and another, and of course that can only exist in fantasy. There is no real physical division which has made that happen in the history of the world. But as an image the wall is very powerful because it leverages the idea of "us and them," which is a very powerful way to begin politics.

There is another way of thinking about this as well. The "build the wall" idea is something that we are trapped in by our own vulnerability to algorithms. Where did “build that wall” come from? “Build the wall” was tested by Cambridge Analytica remotely from Great Britain using Facebook data, and it was discovered that “build the wall” was something which made Americans crazy, either for it or against it. Hence it becomes a Trump campaign slogan.

The machines are very good at finding out the things that generate emotional reactions from us. As a country we do not seem to be able to find our way out of what originated as a kind of experiment in psychology.

Donald Trump has done very little to improve the material lives of the vast majority of his supporters. If anything, Trump and the Republicans have made the lives of those "white working class" voters even worse. How then is he able to maintain control over them?

This is not actually national socialism. Because in actual National Socialism, social goods are redistributed meaningfully. In that project race would be used as a way of redistributing and expropriating resources. That is what Nazi Germany did.

With few exceptions the Trump administration is not doing this. Trumpism is a kind of populism that instead redistributes emotions and pain.

For example, the people who do not want to pay taxes, the very rich especially, do have more money because they're paying fewer taxes. But the voters who matter, the ones who actually pushed Trump over the top in 2016 and could actually use some help from government, are suffering as much as they were two years ago -- or in some cases more.

The way this logic works is that the pain is always going to be there to be redistributed, but the redistribution is through language and emotion. Nonwhite immigrants and migrants and refugees and asylum seekers will be blamed. At other points it will be different people.