How the deep forces of British history, from royalism to nationalism, combined to trigger the Brexit moment 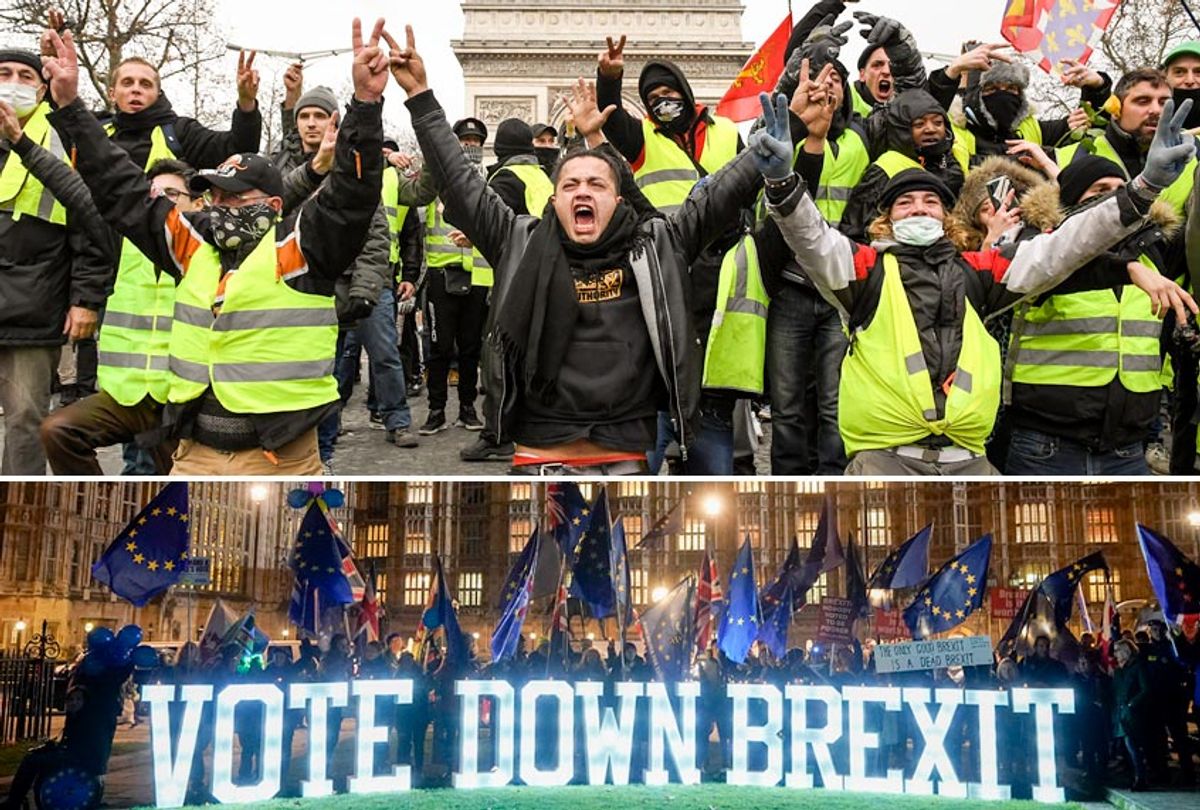 Demonstrators kneel and gesture with victory signs as they take part in the demonstration of the yellow vests near the Arc de Triomphe on December 8, 2018 in Paris France. Anti Brexit protesters use illuminated signs as they demonstrate with placards outside the Houses of Parliament, Westminster on December 10, 2018 in London, England. (Getty/Jeff J Mitchell/Christopher Furlong)
--

Generations of inadequate school history teachers, the BBC’s drama department, the royal family and the silly songs that British children are forced to sing, have all come together in creating Mrs. May’s Brexit mess.

The Brexit disaster is only explicable by diving into that British culture that promotes the uniqueness and superiority of my fellow British citizens.

Half a century ago, Edward Heath, then the prime minister, fought desperately to change that narrative and demonstrate that we were indeed a “European nation.”

Heath managed to convince then-French president Georges Pompidou to turn back the famous “Non” from president Charles DeGaulle and allow the UK to join what was then simply called the Common Market.

But Heath failed to deliver on the other half of the equation — fully convincing the British people at large.

Never mind the fox hunting/grouse shooting country set that has been ever present in the Conservative Party. It opposes Mrs. May today just as adamantly as it opposed the very idea of Edward Heath being ready to share power with “Continentals” in his day.

I grew up in grubby London schools where we were constantly informed that our “Great” Britain had not been invaded for 1,000 years. Our island’s story was glorious in every respect.

Our knowledge, we were told, need not reach beyond the borders of what was once the empire, where we ruled supreme. We learned about the Greeks and Romans, of course, as they influenced our kingdom, but never a word was uttered about the great civilizations of Asia and Latin America.

The narrative of British superiority was compounded from one generation to the next by a constant stream of television multi-part dramas hailing, for starters, the glories of British royalty.

They went on to the harmonious telenovela-style dramas detailing the relationships between those upstairs and downstairs in grand country mansions. And on to the movies of the valiant British soldiers fighting against all the odds in two world wars.

All of this was regularly accompanied by hearty renderings of: “Rule Britannia! Britannia rules the waves; Britons never, never will be slaves.”

Even now, the British continue to hark back to what one recent new film titled our “Darkest Hour” as Winston Churchill defied Hitler.

Then, there was the 2017 movie “Dunkirk.” Not to mention the world-winning TV series “Downton Abbey.” And of course, the third series of “The Crown,” portraying the life and tribulations of Queen Elisabeth II, is currently in production.

Two men best epitomize this grotesquely grandiose mindset — Jacob Rees-Mogg and Boris Johnson. They sit smugly on the Tory backbenches in the House of Commons, exploit the national narrative to the extreme, adding discomfort to Mrs. May.

Their main desire is to complicate the Brexit debate, split their political party asunder and grossly downplay the formidable difficulties that a blunt Brexit will do to the British economy.

Mrs. May wants to see the UK find a way to remain associated with the EU. The deal she negotiated pleases nobody, but this was the inevitable outcome from a referendum result where all the Union Jack flag-waving nonsense of the “Rule Britannia” brigade secured victory.

The reason is simple. The harmony of the EU could not be sacrificed by granting the UK overly generous parting terms and Mrs. May knew from the outset that she had been dealt a dismal hand. But she accepted it directly in order to become the country’s prime minister.

Unsaid in the national debate, but not far from the surface and consistent with that sense that the nation had not been invaded since 1066, is contempt for the idea that a man from Luxembourg, a country with a population barely equal to that of a London suburb, could have the temerity to tell Britons what is best for them.

Jean-Claude Juncker may head the EU Commission, but that does not grant him respect across the English Channel (as the British call it).

Unenthusiastically into the Common Market

When Pompidou made his heroic statement to Heath in late 1969, Jacob Rees-Mogg’s father, William, then the editor of The Times, declared that the newspaper was henceforth “European.” Given the importance of tradition and culture to the London Times, that was a very courageous move.

Rees-Mogg Sr. announced on the front page that The Times would appoint a European Business Correspondent to be based on the continent of Europe.

As it happens, I was selected for this new assignment, sent off to Frankfurt (the first full-time foreign economics correspondent to be based there) and told: “Report on Europe!”

Mind you, William Rees-Mogg never displayed great interest in the Common Market. We would meet in his office at times and he might casually ask me to write an editorial without giving any guidance on what line should be taken.

The editor admitted at times that he did not care too much for the political leaders on the continent, although to the astonishment of a couple of colleagues and me over a memorable dinner he did express admiration for Franz Josef Strauss, then the Bavarian right-wing political leader.

Rees-Mogg — father, and probably the son, too — had an emotional conviction that there existed a “special relationship” between the English-speaking peoples, comprising the British Commonwealth on the one side, led by 10 Downing Street, and the United States.

It is another part of the myth that so abounds in the UK and has distorted clear vision of where Britain’s true interests rest.

Foolhardy belief in a “special relationship” influenced prime minister Tony Blair to support president Bush’s war in Iraq, which cost Blair his job and damaged the center-leaning faction of the Labour Party.

It is the continuing thoughts of that “special relationship,” which Churchill biographer Boris Johnson still seems to consider a reality that infuses his pro-Brexit enthusiasm.

The fact is that World War Two saw the peak of that relationship, just as the Suez war fiasco in 1956 saw its nadir.

President Trump may despise the EU because its leaders have the temerity to criticize him, but he has not given a moment’s thought to bailing out the UK post-Brexit and offering a special bilateral trade deal.

The Rees-Moggs, father and son, just like the Johnsons — son Boris and his even more fanatically British nationalist father Stanley Johnson — have greatly influenced the British debate over its standing and place in the world over many years. Simply put, they have stood on the wrong side of history.

Free to wallow in its glorious past

No, the British people, once the UK leaves the EU, will be on their own, free again to wallow in their glorious past should they so wish, while facing grave economic challenges solely of their own making.

The one consolation for the British, at least, is that 2019 sees the cricket world championships with the final to be played at Lords cricket ground in north-west London.

This is an event, if ever there was one, to bring smiles to British faces and memories of the uniqueness of their nation in European terms — continentals will not be found on the cricket pitches of England.