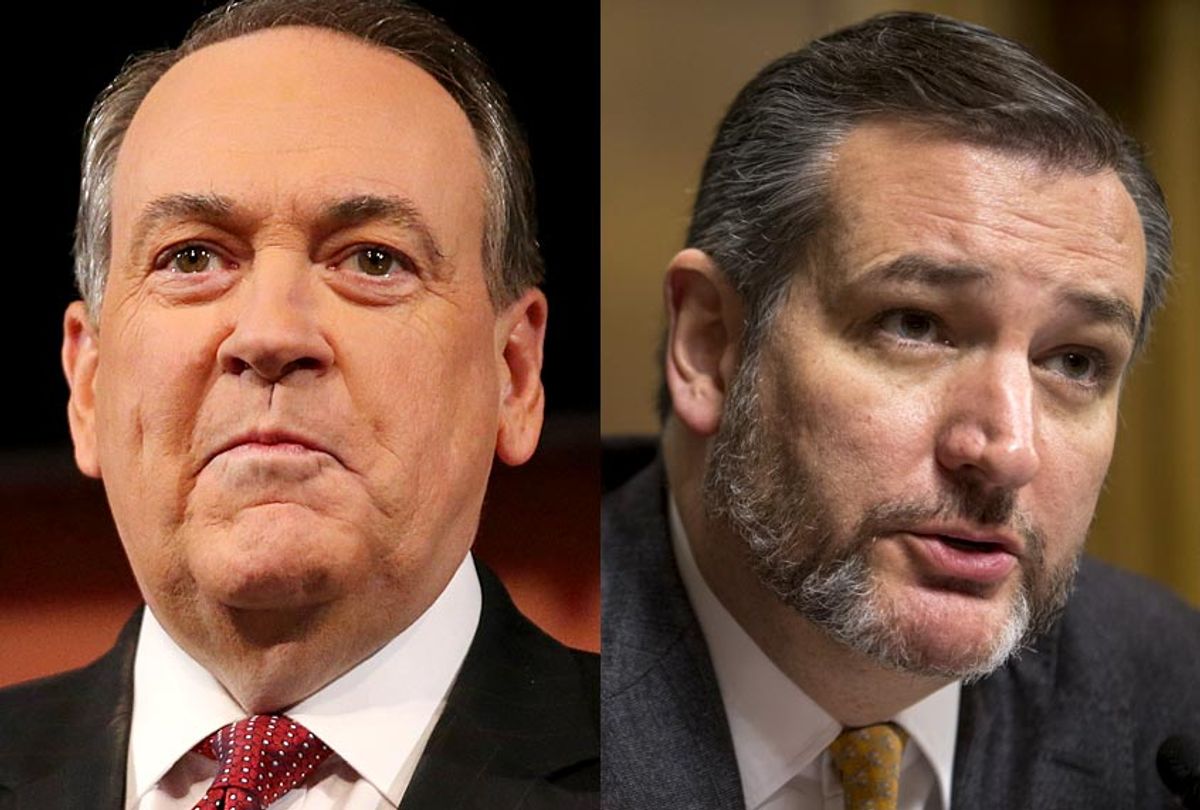 Even forcing a record-setting government shutdown over nonsense is not enough to keep people from noticing that Donald Trump acts very much like a criminal scrambling to conceal a multitude of crimes. Just this weekend, the Washington Post reported that Trump "has gone to extraordinary lengths to conceal details of his conversations with Russian President Vladi­mir Putin," including personally confiscating notes from his interpreter in 2017.

When asked later if he was working for Russia — in an interview with Jeanine Pirro on Fox News that was supposed to be a softball — Trump pulled a classic deflection strategy, no doubt honed through decades of denying adultery to his three wives, of rambling on about how offensive the question was without ever actually denying  the charge.

In the same interview, Trump also engaged in his favorite sport of witness-tampering, by trying to prevent his former lawyer, Michael Cohen, from testifying before Congress by hinting he has dirt on Cohen's father-in-law. This resulted in a letter from congressional Democrats, warning the president of the United States that witness tampering is illegal.

Even in the numbingly awful news cycle of the past three years, there's something special about this train-wreck of stories about Trump allegedly destroying evidence and tampering with witnesses. But that apparently has done nothing to weaken the willingness of Republicans and their allies in right wing media to assist Trump's cover-up operation in every way possible.

Here are some of the increasingly frantic tactics Republicans and conservative media allies are rolling out to provide cover up for Trump's rampant and evident corruption.

Democrats are the "real" colluders

Sen. Ron Johnson, R-Wis., in a weekend interview with CNN's Jake Tapper, tried to confuse the issue by suggesting that the Democrats are somehow the ones conspiring with Russians for nefarious purposes.

The gambit, which Trump favored months ago in his efforts to deflect attention from his corruption, relies on almost comically convoluted logic. Investigator Christopher Steele interviewed various Russians while doing opposition research on Trump, and some amount of Democratic money was paid to the firm that hired Steele to do this. Republicans are pretending to believe this is "collusion."

This ploy relies on conflating Steele's work interviewing Russian individuals about Trump's misbehavior and possible crimes with committing crimes. It's the equivalent of saying a detective is a criminal because he interviewed witnesses to a crime, a crushingly stupid argument. The hope clearly is that by throwing out a lot of words like "dossier" and "collusion," Republicans can confuse audiences to the point where they quit trying to follow the story at all.

The FBI are the real bad guys

"Well, what scares me the most is, is if the FBI can decide on its own to go and investigate a duly-elected president of the United States and just decide to go after him because they want to," Huckabee complained on Fox News on Monday, writing off the impetus for the investigation as "based on rumor."

Huckabee is lying, of course. The FBI's investigation was based not just on "rumor," or even on Trump's suspicious actions, but also on his blunt admission that his purpose in firing Comey was to shut down the inquiry into his Russian ties. Trump not only privately tied the Comey firing to his fear of a Russia investigation, but he admitted that obstruction was his purpose in public, telling NBC News reporter Lester Holt that he was explicitly thinking about "this Russia thing" when he decided to fire Comey.

By hammering at what a supposed outrage it is to investigate the president, Huckabee is pushing an idea that should trouble all Americans, irrespective of party or ideology: that the president should be above the law. In truth, Trump's power is all the more reason to be concerned about his ties to Russia. Having Putin controlling a failed New York real estate developer likely isn't a serious threat to national security. Having Putin control the president is rather a different matter.

Republican voters don't care about any of this, and they're the only people who matter

On Sunday, Sen. Ted Cruz went on "Meet the Press" to argue that "when you get outside the Beltway, I don't find anybody concerned with" Trump's ties to Russia or special counsel Robert Mueller's investigation.

This is yet another variation of the increasingly popular Republican belief that only their voters count as "real" Americans, and that the majority of Americans, who voted against Trump and tend to vote for Democrats, simply don't count. Sure, Cruz tried to spin this by making it about the "Beltway" versus everyone else, but that's just a not-very-subtle way to put lipstick on this particular pig.

In reality, an NBC/Wall Street Journal poll suggests that 62 percent of Americans believe that Trump is lying about his involvement with Russia. The president has historically low approval ratings despite a relatively robust economy, suggesting that his corruption does, in fact, matter to voters. Cruz himself very nearly lost his Senate seat to Democratic challenger Beto O'Rourke in last November's election, which saw strong majorities of voters backing Democrats from coast to coast. He knows full well that Americans do, in fact, care.

Cruz is just writing the majority of Americans off as irrelevant, because Republicans have successfully tipped the electoral field to the point where one-third of the country holds a wildly disproportionate amount of electoral power.

Republican participation in the Trump cover-up is terrifying enough on its own terms, but it also has disturbing implications for the bigger picture of American democracy. In their efforts to shield Trump from consequences, Republicans are increasingly backing overtly authoritarian arguments, such as Huckabee's dismissal of the rule of law and Cruz's insinuation that the majority of Americans, based mostly on geography and demographics, simply don't count.

This growing hostility to the basic values of democracy will likely persist, even after Trump is gone. It's unwise to shrug off Republican excuse-making as nothing more than partisan spin. Not only are Republicans trying to cover up what they clearly also believe is a probable crime, they are more than willing to undermine the foundations of our democracy to do it.