This very normal egg is now famous on Instagram. But why?

A picture of an egg has garnered more than 30 million likes, beating out Kylie Jenner's baby photos 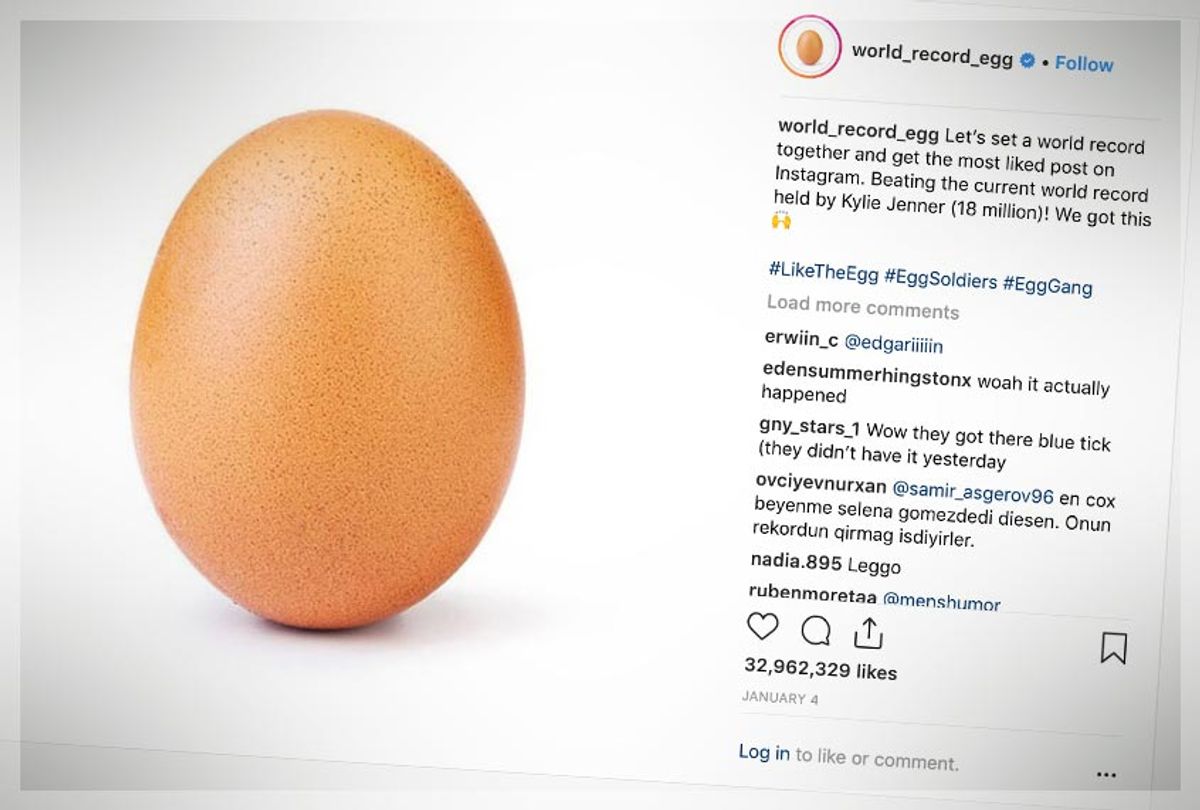 Kylie Jenner's birth announcement, an endearing photo of her newborn baby's fingers wrapped around her perfectly-manicured thumb, was the most-liked post on Instagram ever. That is, until it got dethroned by an egg.

There's nothing remarkable about this egg. It's tan and speckled as eggs tend to be. It's not cooked to perfection, or adorned in an interesting way. But on Jan. 4, the account,
@world_record_egg, also known as "Egg Gang," posted the egg with the caption: "Let’s set a world record together and get the most liked post on Instagram. Beating the current world record held by Kylie Jenner (18 million)! We got this."

It took less than a week and a half before the egg was victorious, toppling Jenner's record — the youngest Kardashian sister who has 123 million followers on Instagram — and accruing 31.8 million likes and counting.

Let’s set a world record together and get the most liked post on Instagram. Beating the current world record held by Kylie Jenner (18 million)! We got this ? #LikeTheEgg #EggSoldiers #EggGang

Jenner's birth announcement is now riddled with egg hecklers. But the social media queen did not go down without a fight. On Sunday, Jenner posted a video of herself holding an egg of similar look and cracking it over hot pavement, laughing as it bubbled and mutilated over the heat. "Take that little egg," she captioned the post.

According to BuzzFeed News, which conducted an interview with the account via email, "the account holder replied that it was actually being run by 'Henrietta' — a chicken from the British countryside." Henrietta told BuzzFeed, the egg is named "Eugene" and it became viral because "the power of the egg is strong."

"Henrietta said she decided to start the account after she 'stopped drinking for Dry January' and said she was home last Friday night when she 'read an article regarding the top 20 posts on insta, Kylie Jenner topped it with 18m,'" BuzzFeed reported. "I saw this as a challenge to beat it," Henrietta said. "It was nothing personal."

Henrietta also assured all the vegans out there, saying don't worry, "I'm not planning on eating" the egg.

Perhaps it's this last line that speaks in part to the egg's popularity. How often in this polarizing political time is there something so universal that 30 million people can get behind it? Jenner may be of the most-followed and liked on Instagram, but there are plenty of people who take issue with her brand of fame, her family's penchant for cultural appropriation and embrace of profit over everything. I'm an avid social media user, yet I unfollowed all of the Kardashian-Jenners long ago, deciding that hate-lurking around their perfectly photoshopped and curated lifestyles was a huge waste of time.

Eggs are tasty and healthy and easy to cook. And likely there's some satisfaction in using the humble, affordable chicken egg to oust Jenner — a young woman born of immense privilege, and yet still somehow dubbed "a self-made" billionaire — from Instagram's top spot.

Social media may foster a culture of competition and comparison, but it also can serve as an incubator for community. "Egg Gang" checks all of those boxes at once.

There are whole industries built around teaching people how to game social media channels by developing an influential personal brand, but often it's the frivolous and random post that achieves the widest reach. For example, in 2017, 16-year-old Carter Wilkerson set a Twitter record, displacing Ellen DeGeneres' famous Oscars selfie, with a simple request: asking Wendy's for free chicken nuggets for a year.

The tweet didn't garner 18 million retweets as Wendy's initially stipulated, but with more than 3.5 million, it became the most retweeted tweet of all time, and the fast food chain agreed to give Wilkerson his free nuggets. (Alas, breaking a social media record is a fleeting achievement, and Wilkerson has since been dethroned.)

When it comes to the egg, the New York Times reported, "Sometimes, the will of the internet just bends in peculiar ways, and in this case, the internet decided it was into that egg. Still, you would scoff at the cultural significance of the egg at your own peril. For perspective: Last year’s top television show in the United States, 'Roseanne,' averaged 20 million viewers per week. If everyone who liked the photo created a new city, it would be the world’s second-largest, beating Shanghai. The egg’s fans have passed the population of Australia."

So what does the Instagram success of the egg actually mean? Who knows. But whatever it is motivating a humble object to seek approval from humans scrolling on their phones, it's spreading. There's now @world_record.hotdog, @world_record_parsnip and @worldrecordfootball, all with the same goal.

If nothing else, the egg will exist as the largest inside joke of all time. That is until the next thing poaches its spot.