Why is Trump "so chummy" with Putin? Dick Durbin tells Lindsey Graham to hold hearings 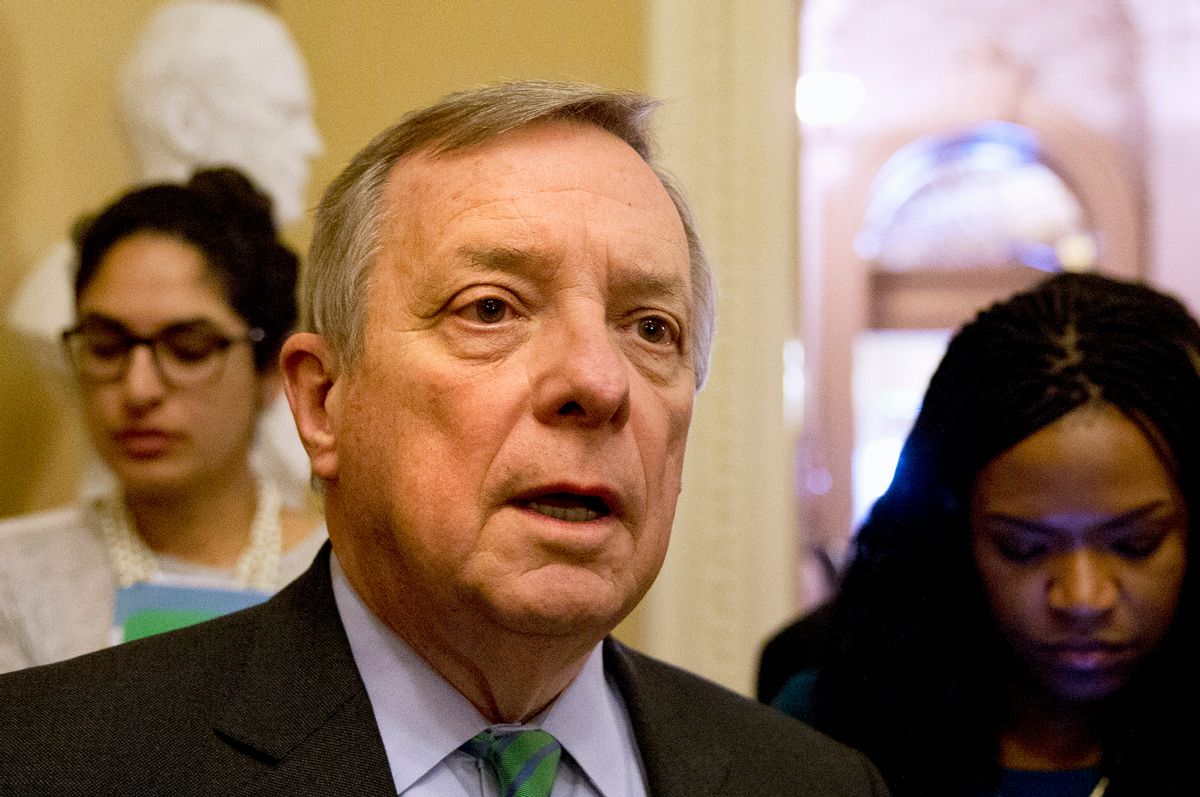 "Why is he so chummy with Vladimir Putin?" Senate Minority Whip Dick Durbin, D-Ill., said of President Donald Trump's relationship with his Russian counterpart after a series of recent reports provoked more "serious questions" about their interactions, and as public anticipation continues to build over the forthcoming results of special counsel Robert Mueller's investigation.

In an interview with ABC's "This Week" on Sunday, Durbin noted key details about Putin's past and his actions as Russia's president: "This man who is a former KGB agent, never been a friend of the United States, invaded our allies, threatens us around the world, and tries his damnedest to undermine our elections. Why is this President Trump's best buddy? I don't get it."

Durbin, a member of the Senate Judiciary Committee, called on Sen. Lindsey Graham, R-S.C., the new committee chairman, to hold investigative hearings into whether Trump has been "compromised by" Russia. As the senator from Illinois said, "It's within his power to hold these investigations, and he should."

Durbin's remarks come as Mueller is expected to finalize a report as early as next month that will detail his findings from the investigation into alleged Russian interference in the 2016 presidential election, and any collusion or obstruction of justice by Trump's campaign or administration — a report which, as Common Dreams reported this week, the president's attorneys may try to keep out of the hands of federal lawmakers and the public by claiming executive privilege.

The comments also follow a report published Friday by the New York Times that after Trump fired FBI director James Comey, "law enforcement officials became so concerned by the president's behavior that they began investigating whether he had been working on behalf of Russia against American interests." As the Times outlined:

The inquiry carried explosive implications. Counterintelligence investigators had to consider whether the president's own actions constituted a possible threat to national security. Agents also sought to determine whether Mr. Trump was knowingly working for Russia or had unwittingly fallen under Moscow’s influence.

The investigation the FBI opened into Mr. Trump also had a criminal aspect, which has long been publicly known: whether his firing of Mr. Comey constituted obstruction of justice.

Days after the FBI launched the investigation, it was taken over by Mueller as part of his broader probe. Trump responded to the Times report in a long series of tweets early Saturday, stringing together a bunch of unfounded claims he's often repeated in attempts to discredit the investigation.

Appearing on "Fox News Sunday," Graham, for his part, said, "I, for one, don't trust what I read in the New York Times," but also that he plans to ask current FBI director Christopher Wray to confirm the details of the reporting.

"I'm going to ask the FBI director was there a counterintelligence investigation opened up regarding the president as being a potential agent of the Russians," Graham said. "I find it astonishing, and to me it tells me a lot about the people running the FBI, [former Deputy Director Andrew] McCabe and that crowd."

"So if this really did happen, Congress needs to know about it," Graham added. "And what I want to do is make sure how could the FBI do that? What kind of checks and balances are there?"

Also this weekend, the Washington Post reported that Trump "has gone to extraordinary lengths to conceal details of his conversations" with Putin from members of his own administration — "including on at least one occasion taking possession of the notes of his own interpreter and instructing the linguist not to discuss what had transpired with other administration officials."

Trump did so after a meeting with Putin in 2017 in Hamburg that was also attended by then-Secretary of State Rex Tillerson. U.S. officials learned of Trump's actions when a White House adviser and a senior State Department official sought information from the interpreter beyond a readout shared by Tillerson.

The constraints that Trump imposed are part of a broader pattern by the president of shielding his communications with Putin from public scrutiny and preventing even high-ranking officials in his own administration from fully knowing what he has told one of the United States' main adversaries.

As a result, U.S. officials said there is no detailed record, even in classified files, of Trump's face-to-face interactions with the Russian leader at five locations over the past two years. Such a gap would be unusual in any presidency, let alone one that Russia sought to install through what U.S. intelligence agencies have described as an unprecedented campaign of election interference.

Responding to that report during his interview on Sunday, Durbin concluded, "When he takes the interpreter's notes and wants to destroy them so no one can see what was said, and the written transcript ... it raises serious questions about the relationship between this president and Putin."

This post has been updated to reflect that Sen. Lindsey Graham made his statements on "Fox News Sunday," rather than to The Hill, which reported on the senator's comments on Sunday but did not indicate that he made them during a television interview.