A constitutional amendment for women's equality: Is it finally time?

With '70s-era feminism back in style, the fight for a constitutional amendment on gender equality is real 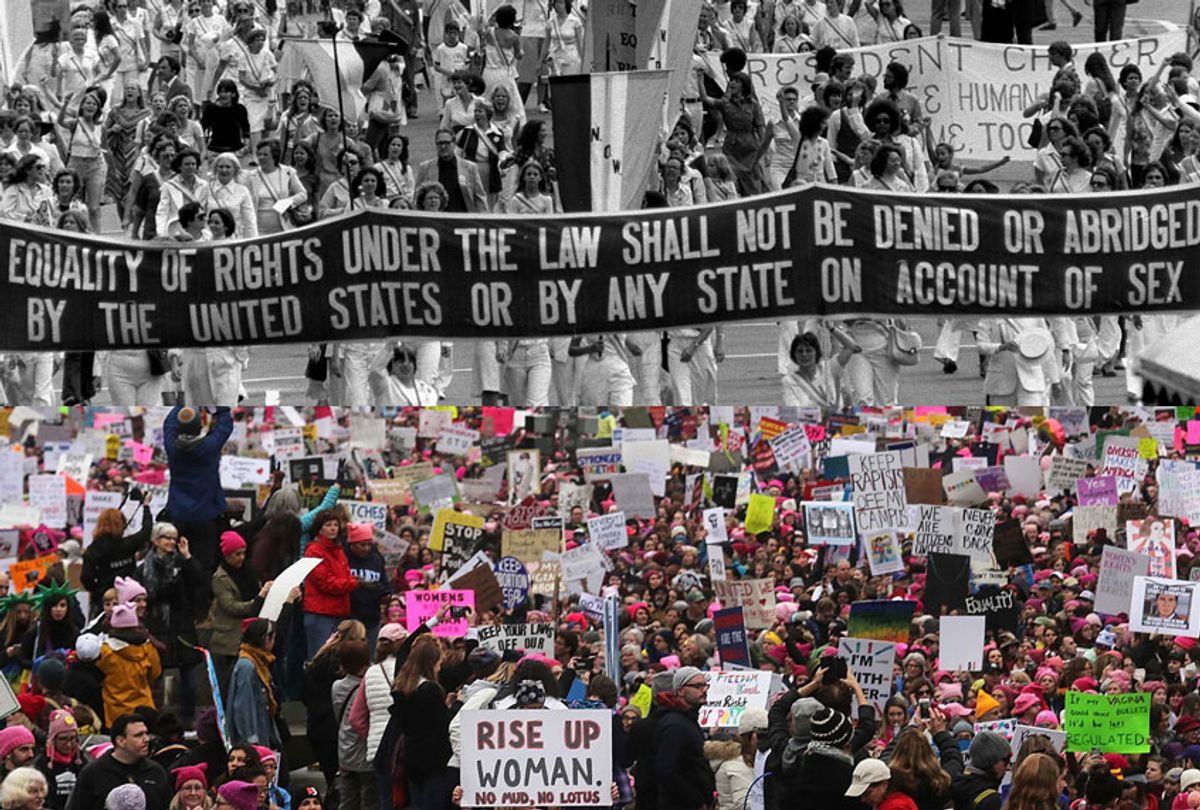 Second-wave feminism, long derided (largely unfairly) as unsexy and overly earnest, has come roaring back in style in the past couple of years. The idea that sexism can be defeated through cheeky irony and cutesy thinkpieces about knitting and oral sex is out. Back in, as demonstrated by the Women's March and the #MeToo movement, is raw anger and grim determination. Not surprisingly, Hollywood is responding with products that valorize second-wave figures like "On the Basis of Sex" and the upcoming "Mrs. America."

This shift has been building for awhile, but the defeat of the highly qualified Hillary Clinton at the hands of leering ignoramus Donald Trump rapidly accelerated a renewed interest in confronting institutional male dominance head on. Now a fight feminists thought they had lost nearly four decades ago has been renewed.

This week, the Virginia legislature will revisit the question of whether to become the 38th state to ratify the Equal Rights Amendment (ERA). If the state does so, it could open the door to amending the U.S. Constitution to state that, "Equality of rights under the law shall not be denied or abridged by the United States or by any State on account of sex."

"We see all these women running for president," Carol Jenkins, a board member of the ERA Coalition, told Salon, "so certainly that’s progress. But many women, most of the women in this country, are still faced with barriers to success, and I think the ERA is the solution for that.”

What the ERA would do in practice, said Emily Martin of the National Women's Law Center, is "make the fact that the Constitution protects against sex discrimination a point beyond debate, a point that doesn’t rely on who’s on the Supreme Court on any specific occasion." Watson describes the amendment as an "insurance policy" that would make it hard for what she called "a terrifyingly regressive Supreme Court" to deny women's equality in the future.

The ERA very nearly became an amendment to the Constitution in the 1970s, after the U.S. Senate opened the door to passing the amendment in 1972 and 30 states swiftly ratified it. But soon there was a right-wing backlash, led by activist Phyllis Schlafly, which used dishonest scare tactics, such as telling housewives their husbands would no longer support them and claiming the amendment would decriminalize rape. That created the cover necessary for male-dominated legislatures to stop ratifying the amendment, and it died an ignoble death with the ratification deadline in 1982.

Or did it? In recent years, there's been renewed interest in the ERA. Nevada and Illinois ratified the amendment in 2017 and 2018, respectively. This week, a bill to ratify the ERA in Virginia was passed by a state Senate panel. It's expected to pass the full state Senate this week and Gov. Ralph Northam, a Democrat, has indicated that he'll sign it.

The only remaining obstacle is Virginia's House of Delegates. Republican Speaker Kirk Cox, under heavy pressure from Del. Mark Cole, has stopped the ERA from even reaching a floor vote in past sessions, and there's concern this may happen again.

"One hundred and sixty million women and children’s equality lie in the hands of two white men who refuse to let the ERA come to the floor and get a vote," Kamala Lopez of Equal Means Equal told Salon. Here's my discussion of the issue with Lopez during our recent Salon Talks conversation.

Cox did not respond to Salon's questions about whether he would bring the bill to the floor of the Virginia House of Delegates.

Republicans these days have left behind most of Schlafly's scare tactics from the 70s. Some of those, such as the claim that the ERA would lead to same-sex marriage, have become moot. Some, such as the claim it would decriminalize rape, have become ludicrous. But conservatives have one thin branch they're clinging to in order to justify opposition, and it's an old standby: Fear-mongering about abortion.

Powerful right-wing groups, such as the Family Foundation in Virginia, are claiming that the ERA is a "smokescreen for abortion" and are trying to nickname it the "Everything Related to Abortion Act."

The reality is that abortion is the smokescreen for opposition to women's equality. As Martin pointed out to Salon, abortion is already legal and  protected under the Constitution, because of the Roe v. Wade decision in 1973. And the conservative movement hasn't just opposed legal abortion, but also laws protecting equal pay rights, laws preventing domestic violence and rape, and laws making it easier for women to get affordable contraception.

It's likely not just all those feminist issues that concern the religious right. The ERA has strong implications for the rights of LGBTQ Americans, as well.

"Discrimination based on actual or perceived sexual orientation or gender identity increasingly has come to be recognized as a form of sex discrimination," explained Jenny Pizer of Lambda Legal. Civil rights lawyers have successfully argued this for decades without the ERA, she added, but "ratification of the ERA now would provide an additional set of arguments" to bolster those cases.

"Let’s not overlook the cultural, political and person-to-person realities" of ratifying the ERA, Pizer added. "So much of the overt discrimination against LGBTQ people results obviously from perpetrators’ desires to maintain gender-segregated norms and roles." Constitutional prohibition of that kind of gender segretation would go a long way toward ending discrimination against LGBTQ people as well.

While the ERA is associated with '70s-style feminism, Jenkins emphasized that this renewed fight reflects the more modern, intersectional trends of the 21st century. She noted, as a woman of color herself, that "we stand, quite frankly, the most to gain by this," pointing out that the legislative leaders pushing for ERA ratification in Illinois, Nevada and Virginia have also been women of color.

Even if Virginia ratifies the ERA, it doesn't mean the fight is over, much less that the constitution is immediately amended. When the Senate started the process for states to ratify the amendment in 1972, it set a deadline to collect the necessary 38 states. That deadline passed in 1982, 37 years ago.

However, activists believe that once 38 states have ratified the amendment, that will open a number of possible paths to finalizing the process. For instance, Congress can extend the deadline, which isn't an impossible dream if Democrats retake the Senate in 2020. There are some legal scholars who argue that the congressional deadline didn't apply to the state ratifications, opening up the door to a court battle. Whatever happens, the next steps can't be taken without a 38th state. That is likely to be Virginia, although efforts are also underway in North Carolina and Georgia.

Above everything else, what the fight for the ERA can do is expand on our national reckoning with the fact that sexism has not been defeated in the way many hoped it had. As the election of Trump made clear, a huge percentage of Americans flat-out do not believe women should be equal. They may not say so that bluntly in words, but their actions speak for themselves. Forcing a legislative fight and getting Republicans on the record opposing an amendment that bars discrimination on the basis of sex can help clarify this issue for the public. We need old-fashioned feminism, because old-fashioned sexism is still extremely powerful.