New analysis suggests Democrats are wrong to fear Medicare for All

Study finds no political downside for Democrats who back Medicare for All, although party leaders remain skeptical 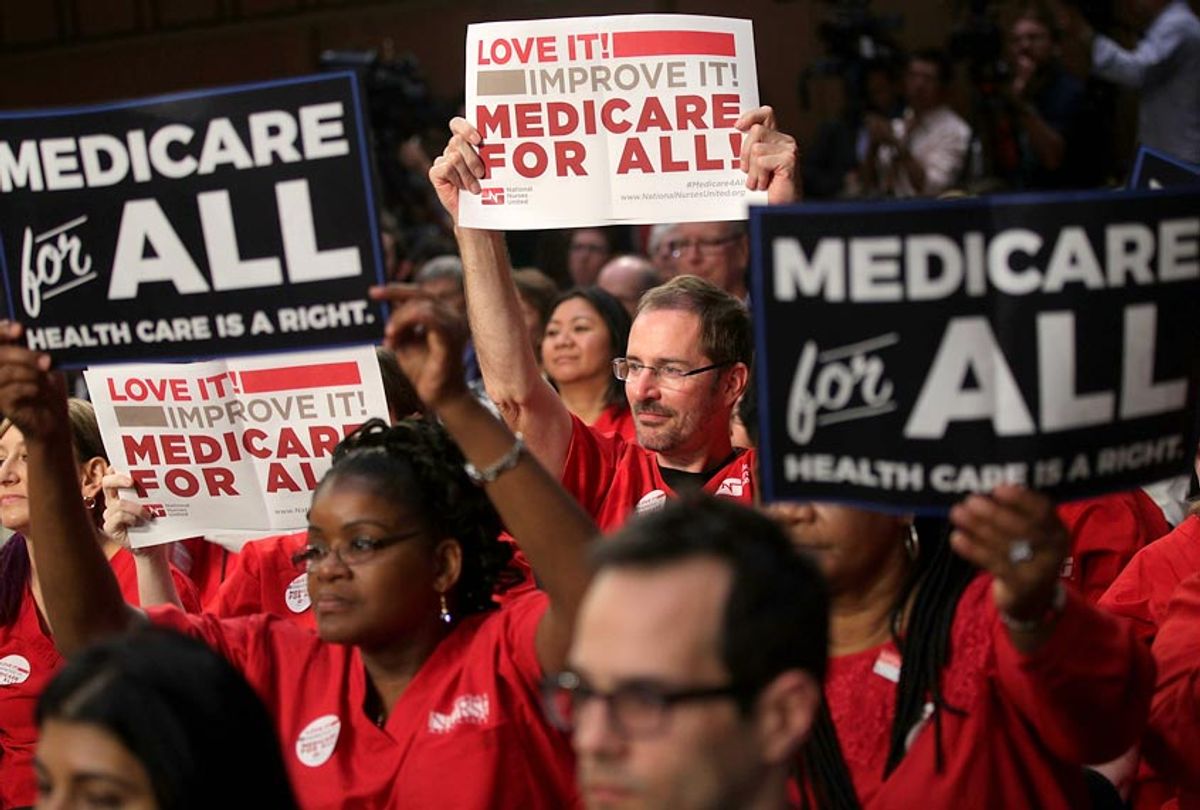 On the same day a new poll showed an overwhelming majority of Americans think the nation's health care system is "in state of crisis," a new analysis shows that Democrats should listen to those Americans — and end their reluctance to run on the promise of a bold solution like Medicare for All while propping up the for-profit system.

A new Gallup survey released Monday showed that 70 percent of respondents saw the U.S. health care system as having "major problems" or being in a "state of crisis." Eighty-four percent of Democrats expressed these concerns about the system in which many families are forced to pay high premiums and deductibles, with worse health outcomes than in other high-income countries, while 56 percent of Republicans agreed.

Gallup has conducted the poll since 1994, with varying majorities of respondents generally expressing similar levels of concern with the U.S. system — but in recent months more Americans have pointed to Medicare for All as their preferred alternative to the for-profit model.

Meanwhile, the progressive think tank Data for Progress found in a recent analysis of the 2018 midterm election results that Democrats need not fear negativity regarding Medicare for All as they look toward 2020 and other future elections.

Looking at Democratic candidates who won in districts that had been held by Republicans in 2018, Data for Progress found (pdf) that candidates who supported Medicare for All were no more likely to lose their elections than so-called "moderate" Democrats.

"Medicare for All is politically safe ground for Democrats in general elections," said Emma Einhorn, a campaign director for MoveOn, which funded the report. "November's election results show that universal, higher-quality, lower-cost health care through Medicare for All is all moral upside — without political downside. Democrats shouldn't let corporate interests scare them away from supporting real change that would save lives."

"There is no evidence that Medicare for All harmed progressive performance in the 2018 midterms. Democrats shouldn't fear authentic candidates who articulate our values. Those candidates offer the best path forward for the party," added Data for Progress co-founder Sean McElwee.

Responding to the Gallup survey, Sen. Bernie Sanders, I-Vt., whose Medicare for All bill has 15 co-sponsors in the Senate, pointed out Americans' widespread dismay over the for-profit system as the latest proof bolstering his case for the proposal.

A poll by Reuters last summer found that 70 percent of Americans — including 84 percent of Democrats and a majority of Republicans — believe the government should expand the federally-funded and broadly popular Medicare system to all Americans, establishing a universal health care system like the ones enjoyed in other wealthy countries.

Despite the rapidly growing appeal of Medicare for All, many powerful Democratic lawmakers continue to refuse to fight for the plan in Congress, with House Majority Whip Steny Hoyer, D-Md., saying days after the Democrats won control of the House that he prefers to wait for President Donald Trump to propose reforms to the Affordable Care Act.

The corporate media also persists in pushing the false narrative that Medicare for All would be too expensive — despite evidence that the system would save trillions of dollars for American families in its first 10 years — with CNN grilling Rep. Alexandria Ocasio-Cortez, D-N.Y., about how the country would pay for the program, a concern the network hadn't shared a year earlier when Republicans pushed through their $1.5 billion tax cut for the wealthy and corporations.