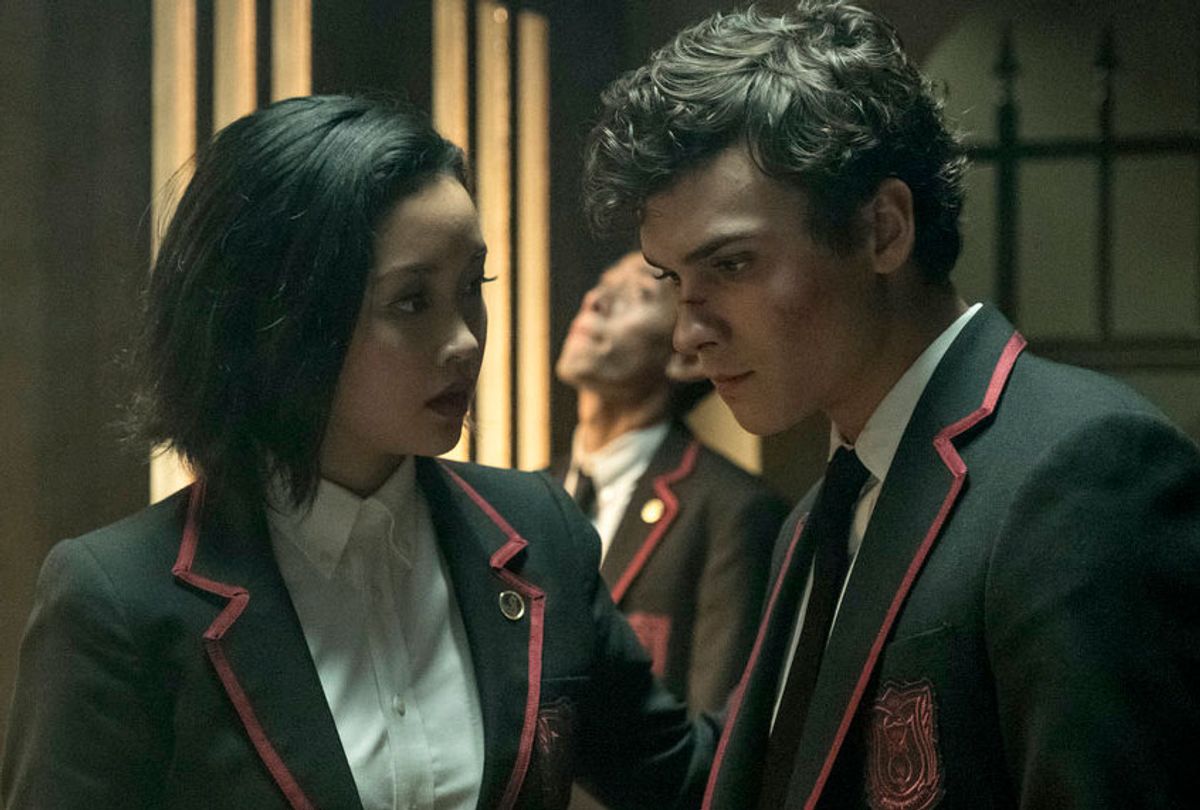 Understanding “Deadly Class” as a story born in the twin shadows of the Harry Potter universe and Christopher Nolan’s interpretation of Batman (in part by way of Frank Miller, one should add) may better square a person with its elevator pitch: Think Hogwarts, except for trained assassins, focusing on one, Marcus Arguello (Benjamin Wadsworth) who sides with the downtrodden against the bullies of the world.

So you have a strain of power-fantasy vigilantism mixed with a curriculum not even those cool weirdoes who owned copies of “The Anarchist’s Cookbook” might have imagined: AP Black Arts, criminal psychology taught by an actual psycho, and Poison 101, whose teacher is played by none other than Henry Rollins.

“Deadly Class,” making its Syfy debut Wednesday at 10 p.m. following a streaming preview online, is a curious creation that speaks to modern sentiments, and misery, through a lens trained on the past. Initial episodes are almost entirely posture and mood, capitalizing upon a stylized version of the Reagan Era, its underground scene specifically.

Marcus is the most misunderstood youth in a school full of them, a homeless orphan recruited by Kings Dominion after he’s thought to have burned down the abusive children's home where he had been placed, killing other kids in the process. Instead of punishing Marcus, Headmaster Lin (Benedict Wong) offers Marcus the chance to harness his murderous impulses.

He accepts because he has nowhere else to go, and because the school might be the one place that can give him the training he needs to take vengeance on the person Marcus blames for ruining his life. (Hint: the pilot, like the 2014 graphic novel kicking off the series, is titled “Reagan Youth.”)

Kings Dominion’s class of 1987, the main subjects of Rick Remender’s graphic novels and the Syfy series based on them, is full of presumed sociopaths like Marcus, none of whom is a unique literary character. And that’s precisely the point. The kids here are just a shade or two off of the “Riverdale” students or the “90210” crowd, except that they exemplify the grimmest version of real-world adolescents.

For example, valedictorian Saya (Lana Condor) keeps her nose clean and watches over everyone, displaying favoritism toward none, at least not outwardly. That, and she’s an expert with a katana.

Here, legacy is everything, placing street kid Marcus among those on the lowest rung of the social ladder, aka the Rats.

When the bullies tell their targets that they’re going to kill them, they mean it.

Marcus and his band of misfits are the kinds of protagonists that would result from the brand of go-go consumerist capitalist that ran over the American middle class. Adults living through the ramifications of that today would have been their contemporaries, age-wise, back in ‘87.

Gen X, once written off as slackers and berated for living an extended version of adolescence, is now appreciated by the likes of Netflix. Who else is responsible making the '80s-nostalgia fueled “Stranger Things” a monster hit, if only by way of paying the monthly subscription bill?

Syfy was bound to get in on that action somehow, if only to find a suitable partner for “The Magicians,” which leads into it on Wednesday nights starting on Jan. 23. “Deadly Class” plays as much as a contrast as it does a complement to Brakebills — a place which, like J.K. Rowling’s school for wizards, is defined by teamwork and loyalty.

Kings Dominion is defined by its divisions, with the privileged existing uneasily on the same social strata, taking out any pent-up disdain on the kids of the lowest caste. The worlds of magic prized so highly in popular culture adhere to fantasies of unity and a message of working together to overcome darkness. The world of killers, in contrast, would cease to function without the threat of pain, and honing the skill with which one group inflicts it on others. Tribalism in extremis.

Without a doubt the show’s interpretation of the teenage mind’s shadowy corners is going to be a turnoff to those see no appeal in a fantasy about kids learning how to kill, in an era when real life teenagers are proving themselves to be awfully adept at it.

Devoted genre book fans, along a certain subset of children of the ‘80s, may find “Deadly Class” to be a wickedly fun excursion set to a soundtrack designed to awaken your inner disaffected youth. You know, the one set on drowning out the world with an endless soundtrack of Depeche Mode, The Cure and Sisters of Mercy while flipping through the pages of a Love and Rockets comic.

Anthony and Joe Russo, co-directors of “Avengers: Infinity War” among other titles, serve as the executive producers of the series, but Remender’s hand steers the story. In sharing the showrunner seat with Miles Orion Feldscott and Mick Betancourt, Remender maintains a fealty to the original work without exsanguinating the story, a tougher feat than one might presume.

In this way the showrunners make “Deadly Class” a black celebration (see what I did there?) of a specific era of graphic novel noir whose influence is felt even today. But this also limits the buy-in range for “Deadly Class,” at least initially, to the kind of crowd that may embrace the unrepentant, heavily-lined nihilism permeating the narrative.

Occasionally the dialogue lays into this a bit too thickly, via character soliloquies resembling anti-corporate rants from the “Repo Man” school of screenwriting. Viewers turned off by that won’t be impressed by the cynicism winding through the opening episodes, either.

But the central cast, led by Wadsworth and Condor, wins you over eventually — or, I should say, the most fleshed out characters featured within the first four episodes do this, a tonal trait the series shares with its literary originator. Like Marcus’ fate, it’s hard to predict whether the first season of “Deadly Class” will end well. But those who don’t drop out immediately receive ample reason to follow along with its lesson plan soon enough.