Think abortion rights is a "divisive" issue? Only to the political class

Yes, a fundamentalist minority passionately opposes abortion, but most Americans want it to be legal and accessible 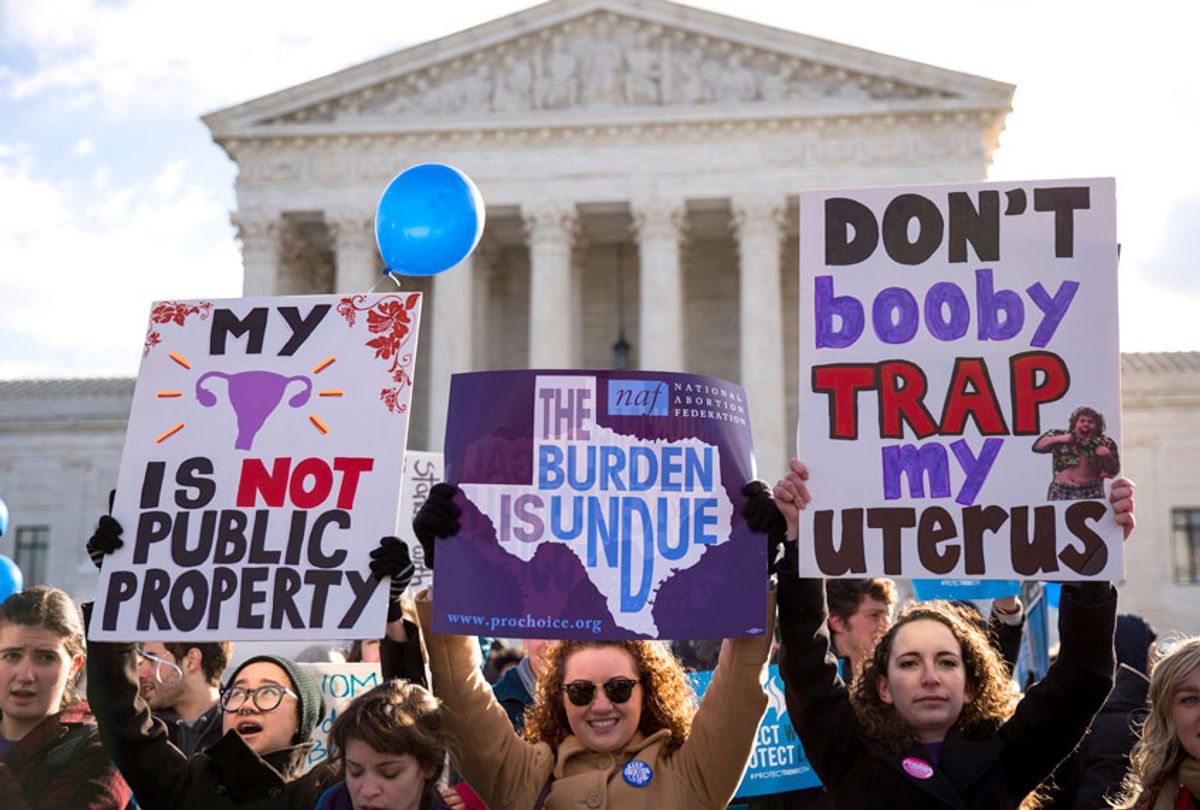 Pro-choice advocates rally outside of the Supreme Court. (Getty/Drew Angerer)
--

The ascendance of Brett Kavanaugh means that the Supreme Court now likely has the fifth vote necessary to overturn or gut Roe v. Wade, making it possible not just for the states but Congress to end legal abortion. The media narrative around this fight will likely, as it has for decades, portray abortion rights as a "divisive" issue that splits Americans right down the middle, suggesting that any overturn of Roe, however unsettling and unfortunate it may be, still reflects widespread popular sentiment.

This narrative would be wrong. In reality, opposition to abortion rights — like opposition to premarital sex, contraception or gay rights — is only a fetish for a minority of Americans involved in fundamentalist Christian subculture. While a fair number of Americans may express ambivalence about abortion, just as they might still feel shame about premarital sex or discomfort around LGBTQ people, ultimately they prefer a system that values sexual freedom and the right to privacy.

“There’s this public narrative that this issue is divisive, the country’s divided. Voters are not divided," pollster Tresa Undem told Salon.

Her firm, PerryUndem, released polling data this week that confirms a trend picked up by other polls over the past few years, showing a strong trend line towards widespread support for abortion rights. Undem's poll, which focused on voters, found that 73 percent of respondents did not want Roe v. Wade overturned and that the same number also believe that most Americans share that view.

About two-thirds of Americans also agreed that abortion should be legal in "all" or "most" cases. When pollsters pressed voters on specifics, such as asking whether legislators should pass laws banning certain kinds of abortions, respondents balked. So, for instance, 85 percent of the people who said abortion should not be "allowed" after the first three months of pregnancy then rejected potential laws that would ban abortions performed after that point.  All of this reinforces the finding that a strong majority of Americans do not want new abortion restrictions.

Part of what's going on here, Undem suggested, is that “people are responding to their own preferences" and imagining "an ideal world" when they're asked vaguely worded questions about whether abortion should be "allowed" in various hypothetical circumstances.

"When we follow up and ask, ‘Do you want a new law?’ or ‘Do you think it’s better if lawmakers stay out?'" she continued, results suggest that many people who may hold stigmatizing views on abortion still strongly believe it should be legal.

The reason so much polling creates the sense that abortion is "divisive" is because pollsters are asking questions that focus on people's lingering shame over sexuality rather than on clearer issues of laws and rights.

If public views are all over the map on the vaguer questions surrounding the abortion issue, that really isn't surprising. Americans are still shaking off a long legacy of puritanical beliefs about sexuality and "vice." There are many things they may still think of as "dirty" but still believe should be legal, including consensual kinky sex, marijuana use or pornography.

In many such cases, people will participate in a behavior without much personal shame while still publicly expressing a belief that it's wrong. Years of polling data suggests that abortion fits into this category for a lot of people: Something they abstractly think of as "wrong" but find both acceptable and  understandable when they or someone they know makes that choice.

While strong majorities of Americans may be pro-choice, Undem continued, when it comes to the "one-quarter to one-third of voters who self-identify as Republicans, they’re divided on this issue."

That might be surprising in itself. Republican political leaders tend not only to be anti-choice but often adamantly so, as demonstrated by pulling stunts like threatening a government shutdown to deprive Planned Parenthood of contraception funding, or spreading the malicious and false conspiracy theory that abortion providers are selling "baby parts."

Republican voters, however are more diverse in their views. In fact, 49 percent of self-identified Republicans want to keep Roe v. Wade, versus 48 percent who want to see that decision overturned. overturn it. Among Trump voters, a clear majority support preserving Roe, 52 to 47 percent. Even on the question of whether abortion should be legal in "all" or "most" cases, which is typically presented as a "liberal" position, 42 percent of Republicans express that view.

There's nowhere near as much division among non-Republican voters. Nearly nine out of 10 Democrats believe abortion should be legal in "all" or "most" cases, and 65 percent of independents share that view.

This weekend, the March for Life will descend on Washington, as it has does every year around the anniversary of the Roe decision. The purpose of the march, which usually attracts large crowds as well as a number of Republican politicians, is to create the impression that anti-choice views are far more popular than they really are. This has been an effective strategy, as evidenced by the continuing media narrative that treats abortion rights as "divisive" rather than something most Americans broadly support.

Anti-choice organizers know they're on safer ground when the issue is seen as a moral debate, rather than a strictly legal one. That's why they turn out robust crowds for events like the March for Life, which aren't pegged to specific legal battles and are framed as culture-war events.

When the Supreme Court was hearing arguments in 2016 over a Texas law that would have shuttered most clinics in the state, the anti-choice crowd outside the court building -- where I was on scene as a reporter -- was surprisingly small. That also speaks to the movement's strategy, which is to gin up a generalized moral outrage about abortion, but downplay its specific role in making it harder for real women to get abortion services, because anti-choice activists understand that's where a lot of people draw the line.

Contrast that with the huge crowds who showed up for Kavanaugh's Senate confirmation hearings last September. Much of that was driven by outrage that Republicans were intent on confirming a man who faced credible sexual assault allegations, of course, but pro-choice sentiment was also a strong motivator. (Anti-rape and pro-choice ideology are clearly intertwined, as both are about sexual autonomy for women.)

That contrast points to a larger trend suggested by Undem's data, as well as an October analysis from FiveThirtyEight: Right now, abortion may be a more mobilizing issue for Democrats than for Republicans. Escalating attacks on abortion rights on a state level, which Undem's data shows Democrats are following more closely than Republicans do, as well as the shift in power on the Supreme Court, has moved the abortion issue out of the hazy realm of "moral" debate and into the realm of pragmatic issues like legal rights and access. That's firing up Democrats while turning off Republicans, who are already more deeply divided on the issue than most political observers perceive.

Roe v. Wade's enduring popularity is one reason why many legal experts believe the conservative Supreme Court majority will likely evade a direct overturn of the 1973 decision that legalized abortion. Instead, they are expected to find some legal mumbo-jumbo that guts Roe of substance and meaning without explicitly overturning it, making abortion legal in name but unavailable for many women (or even most) in practice.

However and whenever it happens, if the Supreme Court takes away abortion rights it will be imposing the view of a small religious minority on the rest of the country, which feels quite differently about the issue. Any coverage that suggests otherwise is misleading at best, and right-wing propaganda at worst.