Donald Trump is the perfect Republican 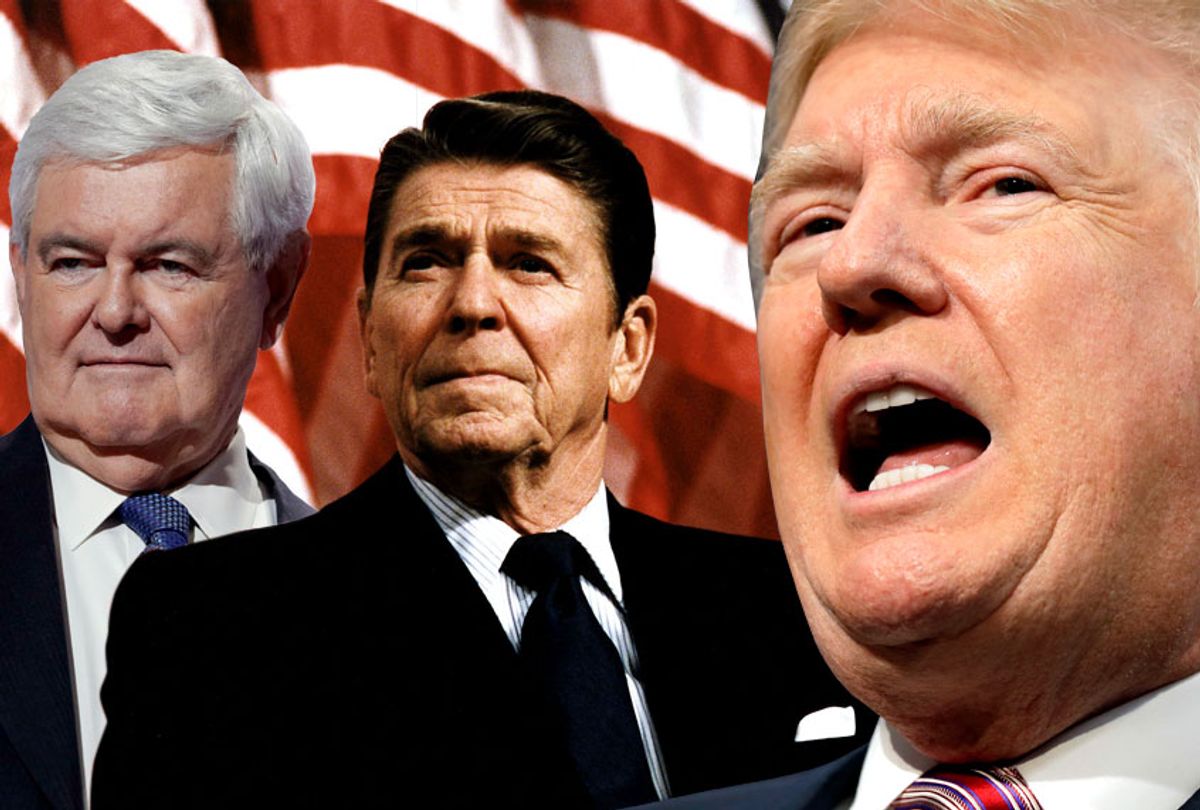 It’s hard to put your finger on the foundational lie of the modern Republican Party, there are so many contenders. But I would date it back to Ronald Reagan and the lie of supply side economics. Remember that whopper? Even George Bush the First called it “voodoo economics” before he embraced it. The idea that lowering taxes would raise revenue was as close to a perfect Republican lie as there ever was. It simultaneously lined the pockets of the wealthy, “starved the beast” of government (in the immortal words of Grover Norquist), and laid the groundwork to attack the so-called “entitlements” of Social Security and Medicare as the culprits when the deficit inevitably blew up. That the arguments for lowering taxes were spurious if not entirely fact free was just icing on the cake.

The only thing Republicans have learned from Donald Trump is that they no longer have to lie strategically. They don’t need a rationale behind a lie. Trump has taught them that all lies, all the time is the way to go. They didn’t even bother trying to defend the Trump/Ryan tax cuts of 2017 with lies about increased revenues and lowered deficits. They just sat back and threw money at their rich donors and let Trump sign the tax cuts into law, and then of course immediately went after Social Security and Medicare for blowing up the deficit.

They’ve been looking for a professional liar like Donald Trump to lead them for decades. Remember how they turned on George Bush the First when he went back on his pledge of no new taxes? Bush had the gall to actually take stuff like the budget and the deficit into account when he raised taxes half way through his term. That was it for Bush. Enough Republicans stayed home on election day in 1992 that Bill Clinton turned Bush into a one-term president.

The arrival of Slick Willie in White House opened the door for the lie that was the Whitewater investigation. Whitewater begat an early embrace by the Republican Party of far-right conspiracy mongers who floated the story that White House aide Vince Foster had been murdered by the Clintons. Foster committed suicide by shooting himself in the mouth, but that wasn’t good enough for loons like Republican Congressman Dan Burton of Indiana, who shot a watermelon in his own backyard to prove that the FBI didn’t know anything about investigating a murder.

It wasn’t far from Dan Burton’s theories about the Clintons murdering Vince Foster to the lie that Hillary Clinton was running a pedophile sex ring out of a Washington D.C. pizza place. Shades of Whitewater, they managed to spend a couple of years and about $8 million investigating Hillary for Benghazi. It’s not really necessary to go into all the lies they floated because pretty much all they did was yell “Benghazi! Benghazi!” and that was all the evidence they needed that somehow Clinton was responsible for a terrorist attack on a State Department outpost in Libya. Even Trey Gowdy’s own committee’s report had to admit there was nothing to the charges. But that didn’t stop them from  using “Benghazi” as a battle cry against Clinton during her 2016 run for president.

It was during Bill Clinton’s presidency that Republican leader Newt Gingrich put into practice his infamous list of words to use against Democrats. Looking for a way to take back the House of Representatives after some four  decades of Democratic rule, Gingrich counseled Republican candidates not to attack Democratic policies, but simply to say they were working to undermine America and American values. They were “radicals” and “traitors” set on “betraying” their country. Democrats were “anti-flag,” “sick,” “permissive,” “corrupt,” and “destructive.”

It was a strategy of lies and name-calling, lacking even a nod in the direction of ideas or truth, and it was a harbinger of things to come.

They elected George W. Bush in 2000 on a campaign of lies about Al Gore claiming to have invented the internet. When the attacks of 9/11 happened, they launched the blizzard of lies that got us into invading Iraq. WMD’s, mobile chemical weapons labs, Saddam’s close ties to al-Qaeda — they went on and on, each lie bigger and better than the last. But perhaps the biggest of them all was when they sold the war in Iraq by saying it would “pay for itself.” Remember that Paul Wolfowitz jewel?Some six trillion dollars later, (according to estimates by Brown University), what are they doing? Trump sold the wall by saying Mexico would pay for it. When that one fell apart, Republicans are of course assuring us it will “pay for itself.”

By the time Bush was running for re-election in 2004, things were sufficiently upside down in Iraq and Afghanistan that Republicans couldn’t run on having “won,” so they turned loose the loons and went after Bush’s opponent John Kerry with the “Swift Boat” lies. Kerry, who had been decorated for valor in combat with a Bronze Star and Silver Star and was awarded not one, but two Purple Hearts, was attacked in a blizzard of lies orchestrated primarily by John O’Neill and Jerome Corsi. Recognize that name? Corsi’s back in the news with new lies about his and Roger Stone’s connections to Julian Assange and WikiLeaks and what they did to aid Trump’s campaign for president. These guys just don’t go away, do they? Nor do the Republicans who use their lies to achieve and remain in power.

It turned out that the Swift Boat campaign against Kerry was just a practice run for what they had in store for Barack Obama when he won the presidency.

Republicans didn’t bother with “facts” at all, fake or otherwise, when they went after Obama for not being born in this country and practicing the Muslim religion. They just threw the lies out there and kept repeating them. And you know who repeated them the most, don’t you? Donald Trump. Remember him calling for Obama’s birth certificate? And remember what he did when Obama produced it? He wanted another. When he got that one, he announced that he was sending detectives to Hawaii to uncover the conspiracy behind Obama’s birth certificate. When his fake investigation in Hawaii didn’t turn up anything, he just kept lying.

That was when Republicans finally took notice of Trump. Here was a guy who was untethered to either facts or morals. He was the perfect Republican. He was like a one-note Newt Gingrich. He didn’t have to say anything other than Obama was not an American. He didn’t care that it was a lie. He just kept repeating it over and over and over again.

Meanwhile, Trump was out there undermining Obama every day for them with his nonsense about the birth certificate, and his father was an anti-colonial socialist, and he’s a Muslim and whatever else came out of his mouth. Republicans were happy Trump was out there doing their dirty work for them.

What they didn’t see coming was Trump doing his dirty work on them. Remember the Republican primaries? More than a dozen candidates for president, some of them establishment figures like Jeb Bush and John Kasich, others like Ted Cruz and Marco Rubio at least marginally respectable. Remember how weird Trump looked up on those debate stages at first? He would just stand there, looking kind of lost. He stepped in it with stuff like not knowing what the “nuclear triad” was, and the rest of them got self-satisfied smiles on their faces.

Then Trump went after them the same way he went after Obama. No facts. No policies. Just name calling and derision. They had as little idea as Obama did about how to get him to back off. It turned out they couldn’t, and one by one they fell. In retrospect, it was blindingly fast. One day there were a dozen or so on the stage. The next, three.

Trump’s empty, bottomless lies worked. At first, the Republican “establishment” was appalled. The National Review devoted an entire issue to anti-Trump diatribes. Then they decided to get  on board. Hey, wait a minute, they seemed to say. This guy is one of us after all! He’s willing to lie about anything! And when his lies are proven false, he just doubles down! And then he repeats them!

Republicans don’t have anything to run on that anyone actually likes. Tax cuts for the wealthy? Nope. Killing Obamacare? Not that either. The misbegotten wars in Iraq and Afghanistan they got us into and spent us into the poorhouse with? I don’t think so.

What they needed was somebody who didn’t stand for anything, who didn’t care about boring stuff like “issues” and “policy,” who was willing to take every lie they’d been pushing for 40 years and make them his own. They wanted someone at the head of their party and in the White House who didn’t care about who he appointed to his cabinet, who didn’t care if the government stopped doing stuff like taking care of the air and the water and inspecting food and testing drugs for safety, who would let predatory lenders rip off poor people while Wall Streeters ran amok, who wasn’t afraid to take the leash off the racist and xenophobic fringe in the party, who cared even more than they did about getting rich off the fat of the land and fuck everybody else.

They wanted a perfect Republican, and they’ve got him in Donald Trump.