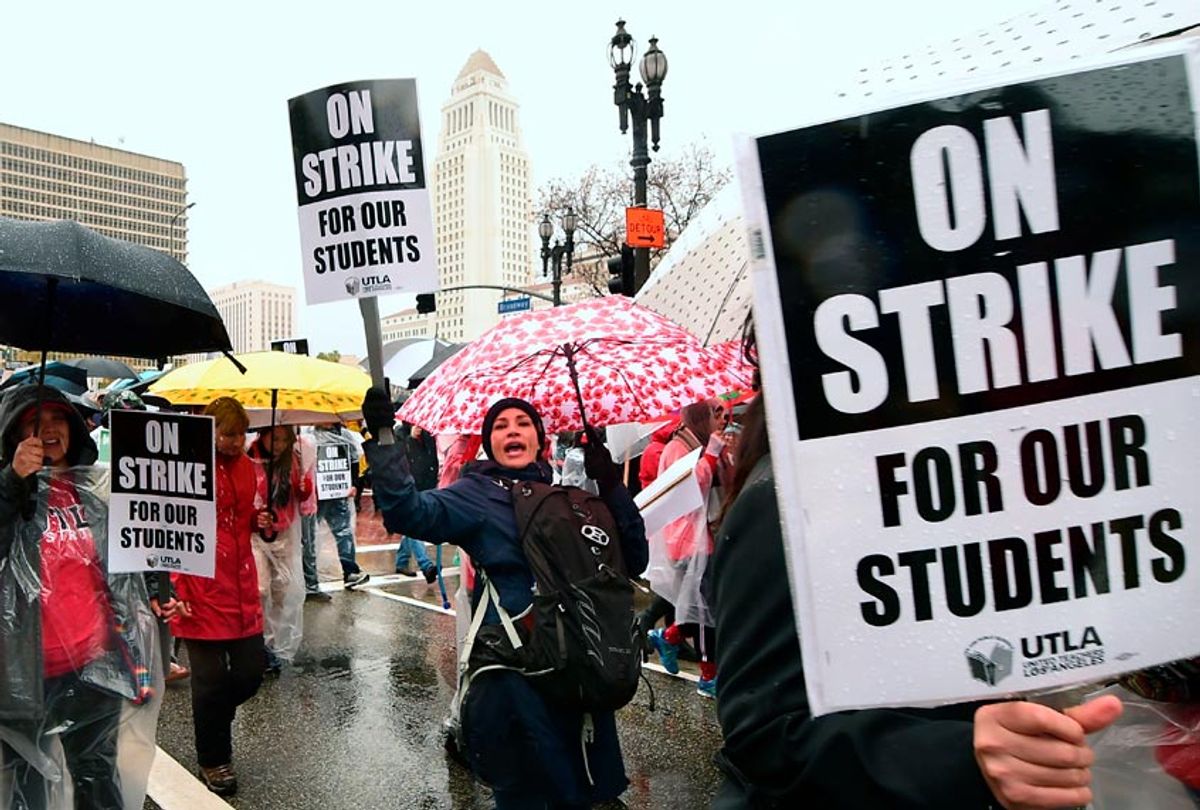 This week, Republican lawmakers held a press conference on Capitol Hill to kick off National School Choice Week, an annual event that began in 2011 under President Obama who proclaimed it as a time to “recognize the role public charter schools play in providing America’s daughters and sons with a chance to reach their fullest potential.” This year, Democratic lawmakers took a pass on the celebration. You can thank striking teachers for that.

In the latest teacher strike in Los Angeles, the nation’s second-largest school system, some 30,000 teachers walked off the job saying unchecked growth of charter schools and charters’ lack of transparency and accountability have become an unsustainable drain on the public system’s financials. The teachers have included in their demands a cap on charter school growth, along with other demands, such as increased teacher pay, reduced class sizes, less testing, and more counselors, nurses, librarians, and psychologists.

The LA teachers’ opposition to charter schools is just the latest voice in a growing chorus of public school teachers calling on politicians to do more to support the public schools we have rather than piling more dollars and accolades onto a competitive charter school industry. And with the backing of nearly 80 percent of Los Angeles County residents, according to one survey, the teachers likely have the clout to change the politics of “school choice” in California, and perhaps the nation.

#RedForEd in a Blue State

Many of the grievances the LA teachers have are familiar to anyone who followed last year’s startling #RedForEd movement, which resulted in mass teacher walkouts primarily in red states, including West Virginia, Kentucky, Oklahoma, and Arizona. In each of those uprisings, teachers protested inadequate pay and benefits, lack of funding for their schools, misplaced emphasis on testing and standards, and a general disregard for teachers’ voices. Teacher opposition to charter schools, vouchers, and other forms of choice had a presence in these walkouts, but LA teachers are making grievances against charter schools central to their protests.

Union president Alex Caputo-Pearl has declared the district’s pro-charter school policies are “a major theme” of the strike, and on the second day of the strike, teachers descended on the downtown offices of the California Charter Schools Association and surrounded the building.

“We need to throw privatization schemes . . . into the trash can,” Caputo-Pearl is quoted as saying in a pro-charter media outlet.

“The subtext of the conflict is the issue of charter schools,” writes Glenn Sacks, a Los Angeles teacher. “Charters create numerous problems for [the district],” he argues, citing recent research studies finding charter schools use various methods to “screen out the students who would be the neediest and most expensive to serve — who then turn to district schools.”

“I’m striking to stop charter schools from draining our schools,” writes LA school teacher Adriana Chavira. “[The union] is asking that LAUSD stop approving charter schools, which have seen a 287 percent increase in the district’s boundaries since 2008. The loss of enrollment across the district means a $600 million loss from our public schools every year.”

“For me, the problem is the privatization of charter schools,” a parent joining teachers at the picket line is quoted as saying in the Los Angeles Times, “and the large class sizes.”

The emergence of charter schools as an important consideration in teacher collective bargaining agreements, and the recognition of charters as a form of privatization, are two major developments in the education policy and politics of choice.

In policy discussions, charter schools are considered primarily as separate entities from the public schools. The standard ideal often used to describe how urban school districts like Los Angeles should govern charters is to strive for a “system of great schools, rather than a great school system.” In other words, urban districts should aim toward having a loosely organized scheme of education providers of various kinds, including charters, with each operating mostly autonomously and competing against each other for students and resources. What’s generally considered out-of-style is for urban school governance to consider how entities in the system impact each other and, therefore, require some coordination and oversight so that the whole system works better.

Charter schools also have been defined as “public schools,” both in policy language and political rhetoric, despite the fact that most of the business of operating a charter occurs out of public view, immune to most controls placed on truly public institutions, and governed mostly by appointed boards rather than locally elected officials.

Should the Los Angeles teachers succeed in changing the governance of charters and in recognizing them as being private, or at least semi-private, entities, the impact on politics will be significant.

Once charters are widely understood as disruptive and harmful actors in a system already under great stress, they are more apt to be targeted for blame and criticism, much in the same way bad sports and rule breakers are blamed for undermining an athletic contest. And as charter schools become more widely understood as private agents, charter-supportive politicians and government officials will be pressed to explain why they are redirecting taxpayer funds meant for public schools into private pockets.

Also, while teachers in red states walking off the job because of lack of support and funding have drawn praise from prominent Democrats, teachers protesting charter schools, something many Democrats support, will push the political debate over choice into new territory, especially in deep blue states.

That discomfort was evident in a recent op-ed by Arne Duncan, Obama’s secretary of education and an enthusiastic supporter of charters, who warned LA teachers against striking and encouraged them to cooperate with local Democratic officials.

The teachers are having none of it, and Sacks wrote a scathing rebuttal to Duncan, calling him “pro-charter/anti-union.”

Indeed, the situation in Los Angeles is no longer something teachers can bear. School conditions have become intolerable — with classrooms stripped of basic resources, and support from full-time nurses and other non-teaching staff, and class sizes exceeding 40 and sometime 50 students.

Charter schools in Los Angeles have become integral features of what’s wrong. There are 277 charter schools operating in L.A. Unified, the largest number of charter schools of any school district in the nation. Charters serve nearly 119,000 students, nearly one-fifth of the students in the district. About 50 charters are operated by the district, which gives them some degree of greater autonomy, but the rest are completely independent of district rules and regulations. And many of the independent charters are also co-located on existing public school campuses.

When charter schools pull funding from a public school, it damages the school’s ability to educate the students who remain because a lot of the school’s costs are “fixed” and can’t be reduced on a per-pupil basis. Schools that find they have to cover the same costs, with reduced revenues due to student attrition to charters, frequently resort to cutting non-teacher personnel such as counselors and librarians — exactly the additional staff LA teachers are saying their schools lack.

In the situation where a charter co-locates on an existing public school campus, space on the campus is divided up between the two schools, which increases class sizes as student remaining in the public campus have to jam into smaller spaces and limit their access to common spaces — again, grievances the teachers are bringing to the table.

“It’s a vicious cycle,” writes Miriam Pawel in the New York Times. “The more overcrowded and burdened the regular schools, the easier for charters to recruit students. The more students the district loses, the less money, and the worse its finances. The more the district gives charters space in traditional schools, the more overcrowded the regular classrooms.”

Threats posed by charters aren’t limited to individual public schools. Indeed, the negative fiscal impacts of charters have the potential to drive whole districts into insolvency.

To mitigate these harmful effects of charters, Los Angeles teachers have put forth a number of proposals regarding charters, including:

But as of this writing, the district has not offered counter proposals on any of them.

Whose side are Democrats on?

As the war over charters becomes increasingly divisive in California, Democratic politicians elsewhere in the country seem to want to avoid it.

In an effort to get Democratic members of Congress on record about the LA teachers’ strike and the issues teachers have with charter schools, Rachel Cohen for the Intercept found few had anything to say.

Notable exceptions to the silence were senators and likely and declared presidential hopefuls Bernie Sanders of Vermont, Sherrod Brown of Ohio, Elizabeth Warren of Massachusetts, and Kamala Harris of California, all who tweeted their support for the teachers but would not comment specifically on charters.

Another reason for Democrats to deflect the issue, Cohen suggests, is that, “Weighing in on the teachers’ opposition to charter schools comes with the possibility of upsetting powerful donors.”

Indeed, charter schools have become a much-favored project of the billionaire class, as wealthy individuals and their private foundations have poured billions into the schools and into the political campaigns of politicians who support them, especially in California where charter advocates have spent lavishly on statewide races and on electing their handpicked candidates to the Los Angeles school board.

But in the upcoming 2020 elections, teachers are intent on pushing the issue of school choice into the debate and demanding that candidates, especially Democrats, make a tough choice themselves and answer, “Whose side are you on?”

To learn more about school privatization, check out "Who Controls Our Schools? The Privatization of American Public Education," a free ebook published by the Independent Media Institute.