This is a story about all the ways to fall in love and . . . grilled cheese.

When you fall in love all with the same person all over again, after 30 years, only one dish will do 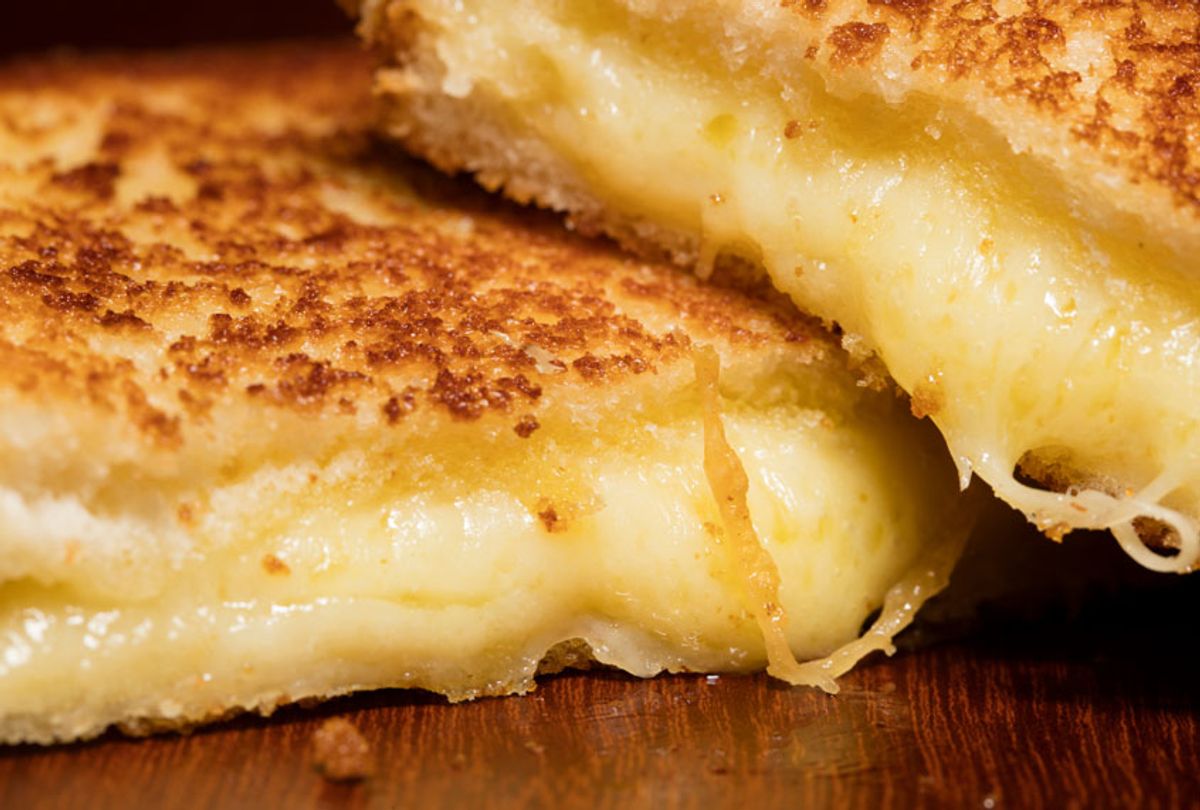 This is a story about all the ways to fall in love and, grilled cheese.

After seventeen years of living together Charles and I decided to get married. That was twenty years ago. Last month I fell in love with him in a way I had only ever imagined.

After we got married, we went to live in England, in Camden Town. There was a pub on the corner called The Lock. It was one of the first Gastropubs, which now are everywhere in London, in fact, you'd be hard pressed to find a pub of my youth, one with faded carpeting, and food so dire that, like a bad movie, it was sort of amazing to behold, let alone eat.

Anyhow, we're at the upstairs bar, we have just shared a rare burger and, are admittedly, a bit in our cups. We are talking about a book Charles wants to write about the cell nucleus, so naturally, this leads to all sorts of hilarity. The bartender comes up and out of the blue says, I have never seen two people more in love. We laugh and tell him that we just got married a week before in our home in Brooklyn. He buys us a round of drinks. And, I see that we've restored in him a faith in love.

Two days later, we are back at the pub, sitting at the downstairs bar and two people couldn't be spitting more venom at each other. This time Charles is eating fish and chips. I'm allergic to fish and nuts (so you'll never see a fish recipe from me), so the fact he's eating it is indicative of all that is going wrong, which, in short, is expectation. I expected, after seventeen years of living together, for everything to be different after we wed. And, it is. But not the way I expected. We both feel, at that moment, like we are on acid and the person we thought we knew has morphed into something else entirely, and we don’t even know if we liked that other person, let alone recognise them. The fight builds, and since we are both chatty bastards, the rhetoric gets downright nasty. I accuse him of never wanting to marry me, how else to explain the seventeen years it took him to finally agree to what I now see is the worst decision we've ever made. He accuses me of having no grasp on reality whatsoever. He even brings up the time I thought I had an itchy brain.  "Who are you?" he asks, his lip at a curl. It was just around this point; I became aware of a man standing behind Charles. He has obviously been eavesdropping on the entire fight, and just as Charles hurls those hateful words at me, the man leans back, his face contorted with curiosity and sadness. It is the bartender. We have shattered love.

That night lying in bed, unable to sleep, haunted by the bartender's face I realize what was bugging me so much. Love and how it happens. I was married before, Charles was a friend of ours. For years he was just a friend. Love, when it happened, was a slow dawning, not a vertiginous plunge. And, from the moment we got together, people constantly commented on how well suited we were, how like a pair of old socks really, comfortable, kind, loving. That is a bit of a cartoon reach, we have had plenty of moments that verged on psychotic, but yes, we are incredibly yin and yang-y. I got out of bed and went downstairs. Everything felt profound, as only things can at 3 a.m. I had baked a homemade Farmhouse white earlier in the day, so I pulled out a pot, made a roux, added some Guinness, and then sharp cheddar cheese. Everyone should eat a Welsh Rarebit when the big questions of life are upon one. Charles must have smelled the toast since he was soon in the kitchen with me eating the king of grilled cheeses as we found our way back to each other.

Twenty years pass. Now I am meeting Charles in Lisbon. We've been apart three months while he maintains his teaching gig in Abu Dhabi and I hold down the fort in Brooklyn.

I arrive first, at dawn. We had decided to spend our first night in a five-star hotel right by the river before moving to our Airbnb. The room is wonderful. Charles arrives early afternoon. We go out. He wants to eat fish. Of course, he does. But this time, as he slurps oysters and munches on crayfish, I'm finding his every move, his every bite, totally sensual. The man does love his food. I can't stop staring at him. I feel light-headed and a bit breathless. A couple of times I look at him and think, "Who is this amazing man?"

The next day we head over to the Time Out Market, where, avoiding the centre with all the food stalls, we start to browse the food market. I pick up some bread, cheese, local ham, hand-churned butter, eggs, various herbs. Charles has wondered off. Carrying my packages awkwardly in my arms, I round the corner, and there he is, and it happens: I fall in love. The fabled leap, plunge, point of no return. He looks at me, a melon still in his hand. "What?" he asks.

"I want to make you a grilled cheese," I say.

As soon as we are settled into our tiny flat, I get to work making us grilled ham and cheese sandwiches which I sprinkle with some dried oregano just before serving. We sit at our little table, our balcony windows opened onto our narrow street strung with laundry and reverberating with voices, and I say, "We have to go back to The Lock. I have to find that bartender."

"I don't care. I have to have him see us now, at this moment madly in love.

“Okay, my Dove, we will.“ Charles laughs, before biting into his sandwich.

1/2 teaspoon cayenne pepper, or to taste.

1/4 cup Guinness Beer or as needed.

Melt the butter until foaming over low heat in a medium size pot, stir in flour, cook down roux for a minute or two. Slowly add the beer, stirring constantly until it begins to thicken. Add Cayenne, dry mustard, and Worcestershire sauce. Slowly sprinkle in cheese, stirring to make sure the cheese doesn’t separate.

When Cheese is all melted, and mixture is smooth and thick, set aside, let cool.

Toast quite well, you want it to stand up against the cheese.

Spread bread with Cheese mixture. This isn’t traditional, but I usually butter the toast before spreading on the cheese.

Brown toast and cheese under the broiler.  Lightly score the topping and add a few more dashes of Worcestershire.