Coming around on Martin Luther King Jr.: My Grandma, the Black church and me

In my youth, my Grandma wanted me to be more like MLK, but I didn't think he had anything to offer a kid like me 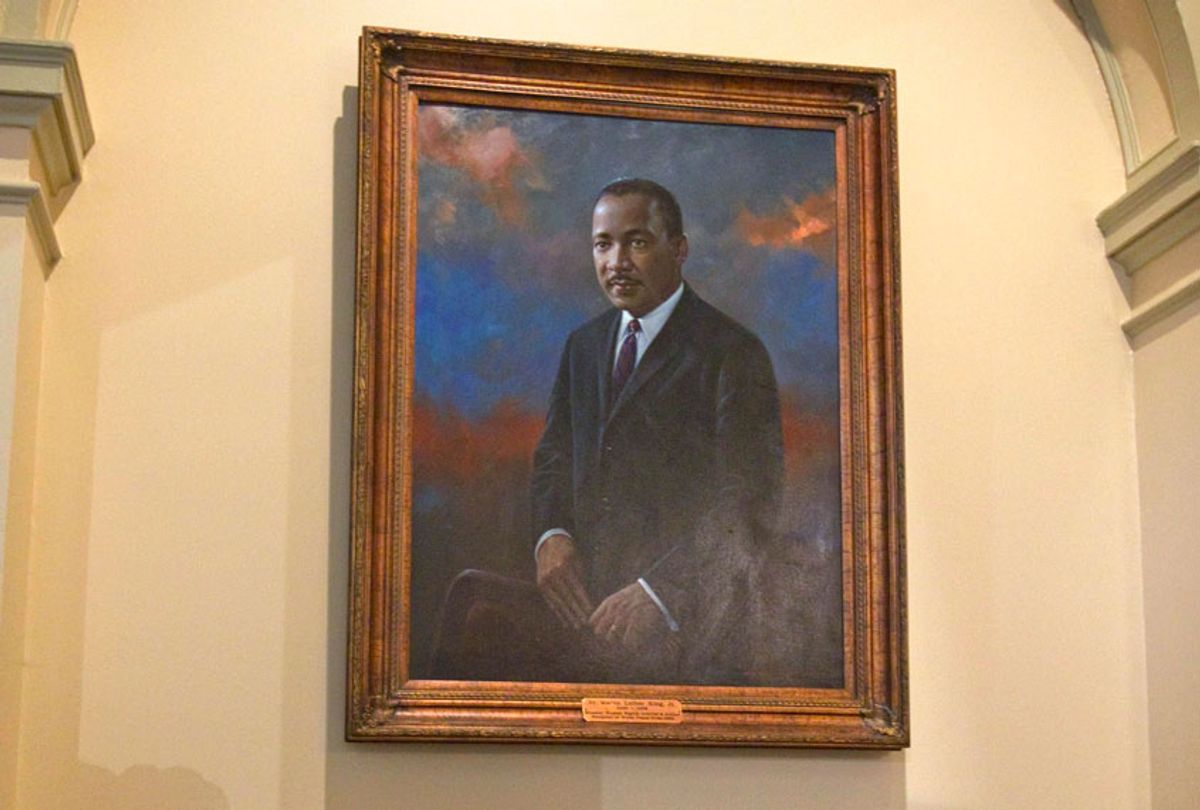 My grandmother was  a warrior. She could get through anything.

Through the pain and setbacks that come with racism and oppression, my grandma emerged and saved enough money to buy her own east Baltimore home. At the bottom of that three-bedroom row house laid the foundation that she used to build her family with the three fundamental necessities she trudged with her all the way from Blackstone, Virginia. Those necessities were easy to remember and went as follows: love Jesus, love Jesus, and of course, love Jesus.

Grandma loved Jesus so much that she hung a picture of him — a bearded white guy who looked like a young Kenny Rogers — in a dull oval frame on her paneled wall. To the left was a portrait of her seven children; on the right, her main man Dr.  Martin Luther King Jr. It felt like every grandma's house I went into in my youth had a picture of the Civil Rights icon on the wall, decades after his death.

My cousins and I, on the other hand, were pseudo Malcolm X / Black Panther Party babies in the '90’s — "pseudo" because we were preteens who didn’t read or fully understood Panther Party rhetoric, and most of what we knew about Malcom X came from rap songs and Spike Lee’s film. But still they seemed more like us, harder than the God-fearing Christian Martin our grandmas loved. King's nonviolent approach, spirituality and place in the black church made them feel safe and confident about the world they were sending us black children into. He was supposed to be our hero, too — we not only saw him on the wall at home, we studied him every February in school, and there's a MLK school and boulevard in every black city in America.

Grandparents were the driving force of our households in the '90s. Not to generalize, but it seemed like no one was really being raised by their parents back then. It could've been the crack era, mass incarceration, people making kids before they were ready to raise them, or a combination of it all, but the Gen Xers and Millennials I knew were raised by granny, who remembers when the black church used to be the epicenter of the black community. Our grandparents invested their all in church because it was a one-stop shop for everything African Americans needed to survive oppression — where you can get food if you are hungry, receive free marriage counseling, a small business loan, guidance, tutoring, prayer, praise, worship and basically help of all kinds. I don’t think enslaved Africans would have been able to get through slavery, or survive in America after it ended, without the black church. That resiliency is what King represented and why our grandmas honored him with a permanent place in living rooms across the country.

The disconnect comes in when 60-year-old Grandma tries to slang lessons from the same civil disobedience and violence-doesn’t-work playbook that King pulled from. Imagine the older dudes in your neighborhood stomping on you, cops stomping on you, the whole system stomping on you, and then Grandma says, "Be like King and don’t fight back."

And then you tell her, “King should be here, but we lost him to senseless violence. The people should've fought back."

So then she invites you to church for prayer, and you love her dearly so you go but you notice that the black church King belonged to isn’t much like the one Grandma attended in the late '90s and early 2000s. Now I’m sure there are plenty of honorable pastors who run wholesome churches out there; however, your home-owning Grandma still lives in and around poverty and the only preachers she introduces you to seem more crooked than the crooks. Their conversation is about money, the Bible, and then money again.

I don’t understand how they drive the fanciest cars, cover themselves in jewelry, sport expensive suits and basically live like kings, while beating people like my Grandma over the head for her last few dollars. In these churches even counseling cost money, if you can book a sit-down with one of the new flashy reverends. I never met anyone who got any type of loan. It all seems like a huge show financed on the backs of the poorest people. The clergy running these places are not part of the community, they just house their buildings — or money-hubs — there, performing on Sundays and then driving their rich asses back to whatever suburb they built their mansions in.

The congregation knows about the mansion and thanks God for blessing the preacher, but most likely will never get an invite. Grandma will never get an invite over, even though she helped get the church off the ground back in the '60s. They won’t call, not even if she makes it to see 80. Meanwhile she's sending me to the store for stamps so she can mail in checks from her hospital bed because she’s too sick to attend services. And you can’t tell her that her preacher is a lying phony because then she’ll stomp you just like cops and the older dudes in your neighborhood did.

But  you know her perspective is different from yours. She sees the good in the church that she helped to build and knows, just like Dr. Martin Luther King Jr. did, that her rewards aren’t here on earth, but rather are waiting in heaven.

I lost my grandma 20 years ago. It's funny that the older me has grown to honor King just like she did. I didn’t convert into a full-time holy roller; however, I’ve read and studied enough to understand that Malcom X was in Harlem, and the Panthers who came later were in Oakland, which were far different and more progressive than some of the places where King worked like Selma and Birmingham, where black people where subject to different types of oppression like lynching, church burnings, and the Klan. I’ve learned that it’s not always about platform, or who has the toughest rhetoric, but my own contributions. What am I doing to leave this world better off than it was before I got here, just like my grandma and Dr King did?

And that’s the message that I’ll carry the most as we celebrate the legacy of Dr. King today: to focus on how he influenced my Grandma, who in turn influenced me, and spreading those teachings through my work and community. It was easy for the young me to judge revolutionaries and cheesy pastors because those opinions make it easy for anyone to take attention away from themselves and the fact that they aren’t contributing. Doing the actual work is difficult, but it's also the most valuable, and this is what I’ve pledged my life to now.