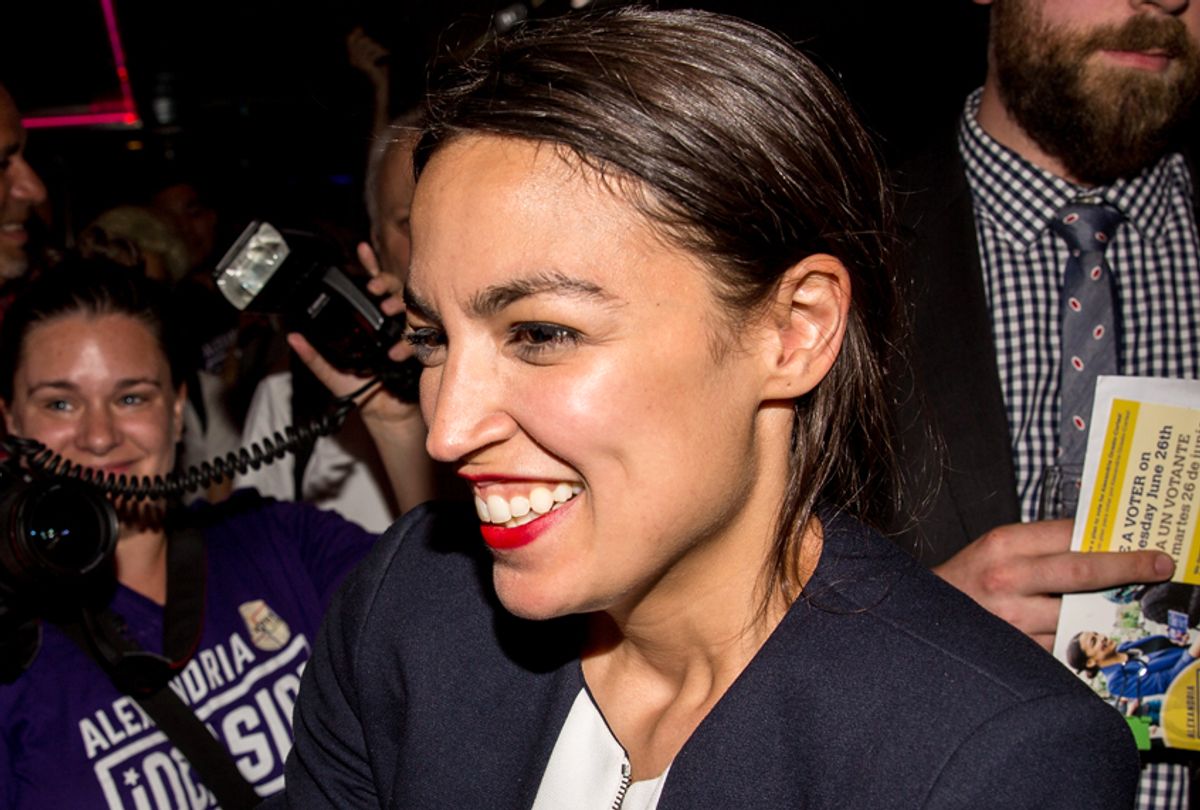 Rep. Alexandria Ocasio-Cortez (D-N.Y.) is not old enough to run for president of the United States — yet nearly three-quarters of Democrats and Democratic-leaning voters would consider voting for her if she were able to launch a White House bid, according to the results of a new Axios/Survey Monkey poll.

The survey reveals that 74 percent of Democrats — and those who lean towards the party — would consider voting for the freshman congresswoman if she could run. It also finds that 17 percent of those adults said they would "definitely" vote for her.

However, the U.S. Constitution prevents anyone under the age of 35 from serving as president, and Ocasio-Cortez is only 29 years old. Yet she's already making history. During the midterm election cycle in November, the New York Democrat became the youngest woman elected to the U.S. Congress.

Ocasio-Cortez has emerged as a national progressive firebrand, in the process capturing the attention of Americans of all political stripes. Although she appears to be constantly fielding attacks from Republican lawmakers on Capitol Hill and conservative commentators, the Axios/Survey Monkey poll revealed that 30 percent of Republicans between ages 18 to 34 would consider casting a ballot for Ocasio-Cortez, while 28 percent of non-white Republicans would consider voting for her.

The 29-year-old was sworn into the House of Representatives, as Democrats reclaimed control of the lower chamber. During the Democratic primary in June, the political novice unseated incumbent Rep. Joe Crowley, who at the time was the fourth highest-ranking Democrat in the House. Ocasio-Cortez is a self-identified Democratic socialist who supports universal health care, tuition-free public universities and criminal justice reform. Most recently, she promoted a policy known as the "Green New Deal" to combat climate change and argued that a 70 percent tax on the super-rich could help fund the ambitious plan, which aims to eliminate carbon emissions within 12 years.

Ocasio-Cortez has also promoted a group that recruits primary challengers to Democratic incumbents whom she believes are too moderate. It is rare for sitting members of Congress to back primary challengers against their colleagues, and Ocasio-Cortez's involvement with the grassroots group Justice Democrats has already emerged as a source of tension on Capitol Hill.

"This country has only ever changed for the better by groups of people that were willing to put everything on the line for a better future," Ocasio-Cortez said a recent video for the group. "It didn't happen by people playing it safe. It happened by people putting their whole lives on the line, because they understood that this isn't just about us."

"This is about generations to come," she added. "We have to give it all we got."

The Axios/Survey Monkey survey polled 2,277 U.S. adults and was conducted between Jan. 16 and 18. The poll has a margin of error of plus or minus 3.5 percentage points.