How Roger Stone played the media: Indictment exposes how he dictated 2016 Clinton coverage 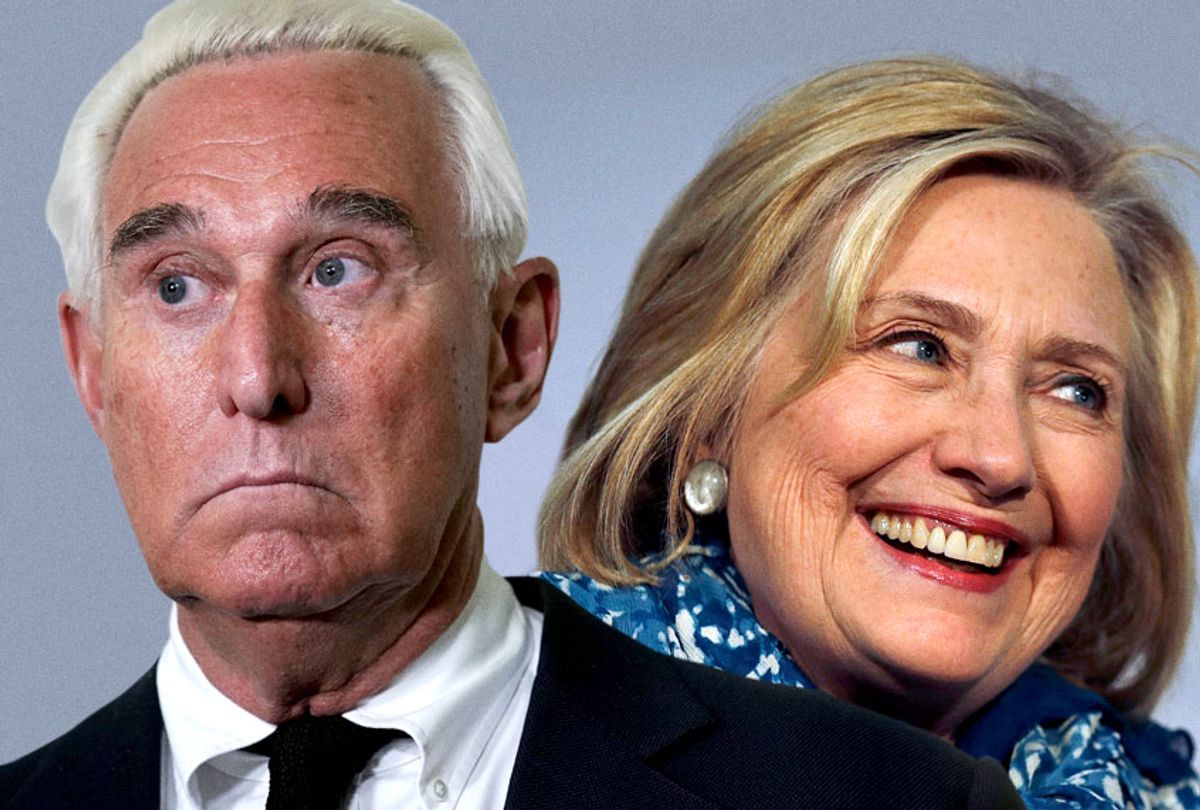 On Friday morning, in highly dramatic fashion, FBI agents swooped in and arrested Roger Stone, a longtime friend and unofficial campaign adviser to Donald Trump. The charges — witness-tampering, lying to federal officials, obstruction of justice — have been long expected, based on previous reporting that suggests Stone may have worked with WikiLeaks to release documents stolen from Democratic officials. The big news in this indictment, however, is that special counsel Robert Mueller appearss to have evidence that Stone was working at the direction of Trump campaign officials and that "a senior Trump Campaign official was directed" — by whom, we don't know  — to  communicate with Stone about his contacts with WikiLeaks.

Immediate media reaction to the indictment has been shot through with amusement at Stone's brash persona and his tendency to revel in his own villainy. The New York Times compared Stone to a "character in a whodunit whom readers immediately dismiss as too obvious to have committed the crime." The Washington Post's article  from the indictment rates "the most colorful section" of the indictment, in which Stone is quoted as urging a co-conspirator to mimic "The Godfather" as major takeaway No. 2 — above the section implicating the Trump campaign directly, which is rated at No. 3.

But in fact, reading this indictment is a sobering reminder of how terribly the mainstream media performed in 2016. Stone's deep involvement in the Trump campaign should have been a major, front-page story in itself. Stone has been a self-proclaimed dirty trickster and full-blown monster his entire adult life. He was fired from Sen. Bob Dole's office in 1973 for his part in the Watergate conspiracy. He worked directly for Trump to lobby against Native American casinos in the '90s. He helped orchestrated the "Brooks Brothers riot to shut down vote counting in Florida after the disputed 2000 presidential election. And that's not even touching on Stone's tendency to use racist slurs and call women, including Hillary Clinton, names like "cunt."

Instead of being the story, as he should have been, Stone was able to drive the 2016 media narrative by repeatedly hyping, with the help of WikiLeaks, conspiracy theories that were complete nonsense but still got endless, breathless coverage from the allegedly respectable media.

As the indictment shows, Stone spent the summer of 2016 working with unnamed persons — who are quite clearly professional conspiracy theorist Jerome Corsi and radio host Randy Credico — to conspire with Julian Assange of WikiLeaks to push claims that Democratic emails, which we now know were stolen by Russian intelligence, somehow proved all manner of seedy things about Clinton and her campaign.

Anyone who actually bothered to read the published emails quickly learned that the allegations floated by WikiLeaks were flatly false. But the mainstream media ignored the real scandal, which was that WikiLeaks was working with criminals to steal confidential material from the Clinton campaign and the Democratic Party, and then lie about the contents of what was stolen. Supposedly reputable journalists covered the email story exactly as Stone laid it out, making Clinton look like the villain rather than the victim of a criminal conspiracy.

Media Matters published a report in January 2017 that made clear exactly how much the mainstream media was led by the nose by Stone and his co-conspirators and fellow travelers.

Another disturbing example that this indictment illustrates is the way Corsi and Stone were able to manipulate the mainstream media into elevating a completely falsified, Stone-created conspiracy theory that Clinton was in failing health and covering that fact up.

On Aug, 2, 2016, Corsi (identified as "Person 1" in the indictment) emailed Stone about what  sounds very much like the WikiLeaks dump of emails stolen from Clinton campaign chair John Podesta. In the email, Corsi also adds that it "would not hurt to start suggesting HRC old, memory bad, has stroke" in public.

The plan to spread lies about Clinton's health, as was documented at the Daily Beast in November, was a smashing success. Corsi's minions started seeding the conspiracy theory within a couple days of the email to Stone. On Aug. 7, the Drudge Report hyped the lie with a photo showing Clinton being helped by aides up stairs — a photo that was six months old and depicted her being caught after slipping in icy conditions. By Aug. 15, Donald Trump was making false claims that Clinton was sick as a major talking point of his campaign.

The Clinton campaign pushed back, releasing an Aug. 16 statement denouncing "lies based on fabricated documents promoted by Roger Stone and his right wing allies."

Even though mainstream journalists knew full well where these lies were coming from, they continued to elevate the lies rather than exposing Stone and his fellow conspiracy theorists. For instance, here's a video posted on Aug. 18, 2016, in which Andrea Mitchell of NBC News asked Clinton about her health, giving credence to this conspiracy theory.

Corsi and Stone's rat-f**king paid off handsomely the next month, when Clinton, who developed a case of pneumonia after months of tireless campaigning, collapsed  in the heat at a Sept. 11 memorial event. That event was given wall-to-wall coverage, treating a normal and relatively minor event — a candidate had fallen ill with a contagious disease — as if it gave credence to Stone-generated lies about Clinton suffering from brain damage. In fact, as Media Matters reported, this non-story about Clinton's health got exponentially more coverage than the very real scandal of Trump's illegal behavior regarding his foundation.

Friday's news cycle will likely be dominated by heavy coverage of the ridiculously villainous Stone, his history of corruption, his conspiracy theories and his lengthy relationship with Trump. But all that was already entirely clear in 2016, when Stone was an important figure advising the Trump campaign.

Instead of asking hard questions about Trump's relationship with a sleazy figure like Stone, and exposing Trump's lengthy history of associating with some of the worst people on the planet, the media instead treated Stone like an assignment editor, who largely dictated their coverage of Clinton. Stone may be in handcuffs now, but most of journalists he fed and manipulated in 2016 will evade any responsibility for their failure to do their jobs.