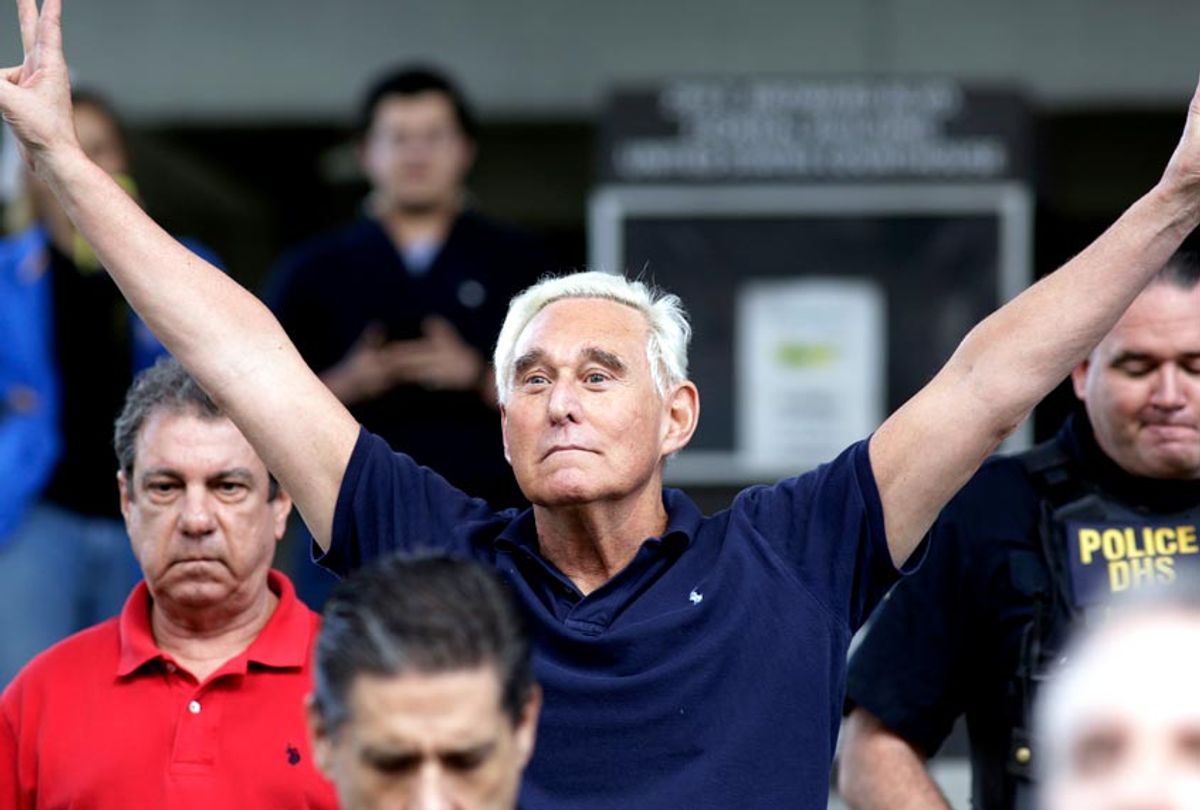 By now, everyone on the face of the earth knows that on Friday, Special Counsel Robert Mueller indicted Roger Stone for committing seven felonies, including lying to the Senate Intelligence Committee, obstructing justice, and tampering with a witness. Coverage of the indictment has focused so far on what it says about Stone’s contacts with WikiLeaks and Julian Assange. Most of the coverage yesterday focused on paragraph 12 of the indictment, which intriguingly states, “After the July 22 release of stolen DNC emails by Organization 1 [WikiLeaks], a senior Trump campaign official was directed to contact STONE about any additional releases and what other damaging information Organization 1 had regarding the Clinton campaign. STONE thereafter told the Trump campaign about potential future releases of damaging material by Organization 1.”

The Mars rover could probably measure wind from the collective sigh of the punditocracy on the surface of the red planet, it was so strong. Finally! Confirmation of collusion! It’s right there! Speculation immediately focused on who “directed” the “senior Trump campaign official” to contact Stone. The top staff of the Trump campaign was famously small. Who could be more “senior” than the “senior campaign official? It was probably Trump himself, the punditocracy concluded nearly en masse.

The rest of the indictment spells out in detail Stone’s contacts with WikiLeaks through his pals: Person 1, known conspiracy theorist and fabulist Jerome Corsi, and Person 2, sometime funnyman and radio host Randy Credico. The indictment outlines how Stone lied about those contacts to the Senate Intelligence Committee, how Stone counseled both Corsi and Credico to either lie to the committee or take the Fifth, and lists the threats from Stone to Credico about what would happen to him after he became a “rat” and a “stoolie” to the committee.

Mueller’s indictment is crafted like his previous indictments of both former Trump campaign officials and 25 Russians in the Russia investigation. It lays out details in an easily followed narrative that more or less amounts to a report on what he has discovered. Legal scholars have pointed out that even if Mueller is prevented from releasing an official report to the public at the conclusion of his investigation, what he has carefully revealed in his indictments already serves as an excellent substitute for an official report.

But what Mueller leaves out of his indictments and other court filings is as interesting as what he includes. Some of the parts have been redacted and appear on the page as long sections of black bars. In the Stone indictment, he omits key details about the Trump campaign and hints at some of what he’s learned but is not choosing at this time to release. The first such hint is dropped at the very top of a section entitled “Background: STONE’S Communications About Organization 1 During the Campaign.”

“By in or around June and July 2016, STONE informed senior Trump campaign officials that he had information indicating Organization 1 had documents whose release would be damaging to the Clinton Campaign. The head of Organization 1 was located at all relevant times at the Ecuadoran Embassy in London, United Kingdom.”

Let’s take a moment to deconstruct the first sentence in the context of the rest of the indictment. Most important is the reference to “June” of 2016 as the first time Stone was transmitting information about WikiLeaks to the Trump campaign. In fact, the month of June never appears again in the indictment, whereas various things Stone said and did in July, August, September and October of 2016 are listed throughout the indictment.

The name of the person who told prosecutors that Stone had informed the Trump campaign in June about WikiLeaks having the Democrats’ emails has been omitted by Mueller. Who could this be?

Well, Stone himself didn’t tell Mueller’s team, so it could be only Rick Gates, who has pled guilty to charges brought against him and is known to be cooperating with Mueller. In fact, it was only 10 days ago, on January 15, that Mueller and Gates’ lawyer filed a document in federal court in Washington D.C. asking a judge to delay Gates’ sentencing hearing, and requesting until March 15 to again “update” the court on the status of Gates’ sentencing. This was regarded at the time as evidence that Gates is continuing to cooperate with Mueller, and that his cooperation is considered important enough to delay his sentencing.

That the Trump campaign knew that WikiLeaks had the Democratic emails hacked by the Russians as early as June of 2016 is very important. It was on June 9 that the infamous meeting in Trump Tower took place between six Russians, including a Russian lawyer with close connections to the Kremlin and a former Russian intelligence agent, with Donald Trump Jr., Jared Kushner, and Paul Manafort. The subject of the meeting was promised in an email to Trump Jr. as information from the Russian government damaging to Hillary Clinton that the Russians wanted to share with the Trump campaign as part of the “support” of the Russian government of Trump’s campaign.

Manafort and Stone were long time friends and associates, having had a lobbying and campaign consulting business together as far back as the 1980s. The Russians had already hacked the DNC emails and may have shared them with WikiLeaks by the time of the June 9 Trump Tower meeting. Donald Trump himself was later involved in crafting a statement lying about the nature of the Trump Tower meeting, saying it was about “adoption” and not dirt on Hillary Clinton. In fact, this is the first time Mueller has indicated that the Trump campaign had knowledge that WikiLeaks was in possession of the DNC emails in June, and that this information came from Roger Stone. It strongly indicates that Mueller knows more about what went on during the June 9 Trump Tower meeting than he has said so far.

The rest of the contacts between Stone and WikiLeaks are significant in the context of what was happening during the campaign. Stone was told to contact WikiLeaks and find out what else they had on Hillary immediately after the first release of the DNC emails on July 22.

On July 24, Manafort denied to George Stephanopoulos that there were any contacts between the Trump campaign and Russia.

On July 25, the Democratic National Convention convened. Early that morning, Trump tweeted that the “joke” going around was that “Russia leaked the disastrous DNC emails” because “Putin likes me.”

The new joke in town is that Russia leaked the disastrous DNC e-mails, which should never have been written (stupid), because Putin likes me

Later that same day, Stone emailed Corsi and told him to “get to [Organization 1] and get the pending emails” according to the indictment.

On July 26, Trump gave an interview to a Miami TV station and said, “I mean I have nothing to do with Russia.” Later that day, he tweeted, “For the record, I have ZERO investments in Russia.”

On July 27, at a press conference, Trump responded to a question with this: “Russia, if you’re listening, I hope you’re able to find the 30,000 emails that are missing.”

That night, Russian intelligence agents in Moscow attempted “for the first time” to break into Hillary Clinton’s email accounts from her “personal office,” according to Mueller’s indictment of the Russians in 2018.

On July 28, Rudy Giuliani appeared on a New York City radio program and said, “The Russians have those emails. They’ve had them for some time.”

Just listen to how casually they all talk about Russians stealing the Democrats’ emails!  It’s almost as if they had known about it for a long time, isn’t it? And that’s an awful lot of references to Russians and the Democratic Party emails in a short period of time, don’t you think? Especially when the first release of the emails by WikiLeaks happened during the week of the Democratic National Convention.

The indictment tells us there were more interesting coincidences between Stone, WikiLeaks, and the Trump campaign to come. On August 2, Jerome Corsi emailed Stone from London, telling him it “would not hurt to start suggesting HRC old, memory bad, has stroke – neither he or she well.” Corsi at the time was claiming to be in touch with Assange through a friend.

On August 8, the National Enquirer, run by Trump’s pal David Pecker, published a story entitled “Hillary Clinton’s Secret Health Crisis.” Pecker was later involved in helping Trump pay off a Playboy model he was having an affair with to keep her quiet during the final days of the campaign.

On August 15, at a rally in Ohio, Trump attacked Clinton, saying she “lacks the physical and mental stamina to take on ISIS and all the many adversaries we face.” Talking about Clinton’s lack of “stamina” and lack of mental acuity would be a theme Trump pursued from the stump until the end of the campaign.

Mueller omitted from his indictment the coincidences between Roger Stone’s actions and events in the campaign, but by any measure, they are too numerous and convenient to ignore. It seems clear from the indictment that Mueller has way, way more information on the connections between the Trump campaign and WikiLeaks’ release of Democratic emails than he has revealed so far.

Mueller went into court on the same day he indicted Roger Stone and argued that Paul Manafort should be shown no mercy because he lied to the Special Counsel even after his plea agreement to cooperate with the office of the Special Counsel. But he’s got Manafort’s friend and deputy Trump campaign chairman, Rick Gates, still whispering in his ear, and a lot of the information in the indictment of Stone appears to have come from Gates.

The next shoe to drop was hinted at by other omissions by Mueller about what he knows happened in June of 2016 between Russians and the Trump campaign. We know about one incident: the infamous Trump Tower meeting. One of those who attended the meeting with Russians is already in Jail.

Stone may have appeared confident in his appearance after court on Friday, but Jared and Don Jr. have got to be very, very nervous. Stay tuned.