Uprising in Sudan: Does this African nation offer a window of hope onto the future?

Why is Western media ignoring the Sudan uprising, where citizens are resisting tyranny and Russian interference? 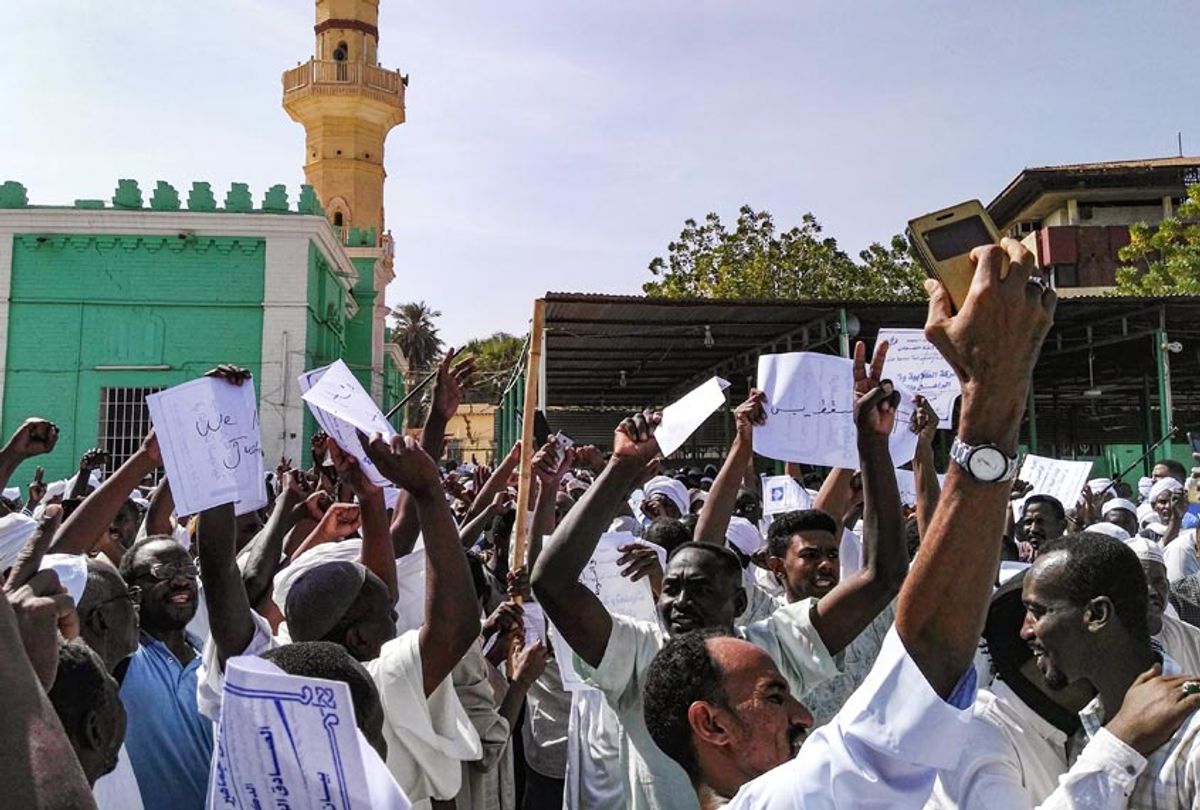 Sudanese protesters chant slogans and raise signs against President Omar al-Bashir during a demonstration in the capital Khartoum's twin city of Omdurman on January 25, 2019. (-/AFP/Getty Images)
--

The story of the world today is the rise of right-wing populism, or so we are told. It’s the story of Donald Trump, of Brexit, of rising nationalism in continental Europe — especially in the east — as well as almost all of the former Soviet Union. But stories can change quickly. Whatever happened to "The End of History"? Or the War on Terror? The Great Recession? Or the Arab Spring? Who knows what the story will be next? Perhaps it’s already being written in Sudan, with echoes of so many other stories folded into it.

Almost eight years to the day after the Arab Spring began in Tunisia with the startling overthrow of the 23-year regime of President Ben Ali, the current Sudan uprising began in the city of Atbara, a railroad union stronghold. That was on Dec. 19, and protests quickly spread nationwide. A month later, Sudan’s 29-year ruler, President Omar al-Bashir -- who has been indicted for genocide by the International Criminal Court -- is barely clinging to power, while American media, not to mention the U.S. government, has largely ignored the entire situation.

“All residents of Atbara are now on the streets,” one eyewitness, Adel Abdel-Latif, told Sudan Tribune last month as the uprising began. “He pointed out that the demonstrators chanted slogans such as ‘Peaceful, Peaceful against the Thieves,’ saying the police and army didn’t interfere to disperse or arrest the protestors,” the publication reported.

The story we’re missing is historic, according to Jonathan Hutson, who helped expose mass human rights violations in Sudan from 2010 to 2014 — documenting 46 village burnings and locating eight apparent mass graves — as the architect of George Clooney's Satellite Sentinel Project.

“What we have is the Western media largely misunderstanding or ignoring a revolution in a Putin-aligned African country, ruled by an Islamic theocracy, where the resistance is committed to freedom of speech, freedom of assembly and freedom of religion,”  Hutson told Salon. Reports of food riots vastly understate the seriousness of events, and Russian involvement with paramilitary troops (reportedly under the direction of Yevgeny Prigozhin, aka "Putin's chef") has failed to register as echoing the predatory pattern already seen in the Ukraine, Crimea and Syria.

“News reporting on Sudan has finally begun to highlight the ongoing economic collapse of the past seven years,” veteran Sudan observer Eric Reeves wrote on Dec. 24, but even so “there is remarkable superficiality and failure to look with any historical depth at how the present catastrophe began. … Priorities in the national budget have been wildly skewed for decades toward the military and security services, with only very small amounts devoted to health, education, and the crucial agricultural sector. Arable land has been sold or leased for decades in order to raise cash for a kleptocratic regime.” In short, al-Bashir’s political affinity to Putin’s Russia are profound.

As for the Sudanese people, it’s not that they’re imitating the Arab Spring — it’s really the other way around: Civil uprisings in Sudan have twice toppled dictatorships, first in 1964 and again in 1985. “The popular uprising has become one of the political norms that Sudanese resort to in redefining their social contract with the state,” noted Luka Kuol, a Sudanese professor of security studies.

Sudan escaped the first wave of Arab Spring uprisings in part because the government learned from those previous examples: It exploited regional, racial, ethnic and religious divisions, broke the power of professional unions and keeping the army dispersed outside Khartoum, the capital city, among other measures. But the government’s continued kleptocratic misrule has pushed Sudan past the breaking point, and al-Bashir's old tricks no longer seem to work.

The Atbara demonstrations spread quickly despite a sometimes violent response. "The numbers of peaceful demonstrators in Atbara are increasing dramatically and the city is in full civil disobedience," the opposition youth group Sudan Change Now tweeted on Dec. 19, along with a 57-second video of a loud but peaceful march. Sudan Tribune reported that eight people were killed on the second day of protests. Barely a month later, the al-Bashir regime appears doomed. The more demonstrators have been killed, injured or arrested, the more the movement has swelled, and al-Bashir’s attempts to divide it along racial and ethnic lines have failed.

In an inspiring and informative overview, “The Chants of the Sudan Uprising,” Wa’el Jubara writes about the regime’s “sick and naive divide-and-conquer attempt” to blame the protests “on one of the armed rebel movements in the West,” conflating them with “peaceful, unorganised (politically) citizens” from Darfur in the West, whom they arrested. “The next day, Sudanese people from all walks of life and origins went out again, calling out the regime on its poor racist tactics,” Jubara wrote. “They called out the failed conspiracy of Al Bashir and said, ‘يا عنصري مغرور كل البلد دارفور‘, loosely translated to ‘You [Al Bashir] are racist and arrogant, we are all Darfur.’”

"The current demonstrations are unprecedented, in terms of scale, persistence, intensity, and geographical reach," Adil Babikir, a U.K.-based Sudanese translator, wrote in Sudan Tribune on Jan. 18. "The momentum is building up, with simultaneous rallies staged in many cities across the country. The revolutionary mood is at its peak. New patriotic songs are hitting the social media platforms every day. Some of these are originally folkloric wedding songs reworded with the themes of the revolution.”

In the midst of all this, on Dec. 31, Hutson posted a 33-tweet thread exposing the Russian presence in Sudan with photos and information provided by activists on the ground. This information on the "illegal" Russian incursion was information further developed and promoted by Sudan Change Now, as well as by the Russia-based Conflict Intelligence Team.

Russian forces in Sudan are apparently or probably there in the guise of Prigozhin’s paramilitary Wagner Group (aka PMC Wagner), which was sanctioned by the U.S. Treasury in 2017 for its involvement in Ukraine. Prigozhin, the now-infamous Internet Research Agency in St. Petersburg and two related firms he controls were also sanctioned in March 2018 for their role in 2016 election interference on behalf of Donald Trump.

“As police fired tear gas and live ammunition at peaceful demonstrators in Khartoum, wounding at least four people, Sudanese observers on the ground wondered about the significance of Russian military trucks spotted in the capital,” Hutson began.

Hutson initially stopped short of definitively identifying PMC Wagner. But the group's presence in Sudan and elsewhere in Africa was already known, if not commonly discussed. In November, Bloomberg reported that Prigozhin was “already active in or moving into 10 countries that Russia’s military already has relationships with: the Democratic Republic of Congo, Sudan, Libya, Madagascar, Angola, Guinea, Guinea-Bissau, Mozambique, Zimbabwe and the Central African Republic.”

Hutson noted that Wagner “guards Sudanese gold, uranium, and diamond mines, as well as atomic energy facilities. Russian media have reported that Wagner trains Sudanese armed forces.” He identified Wagner's typical vehicle as “a light-brown, Ural-4320, all-wheel-drive, two-door cab, 6x6 truck in troop transport mode, similar to trucks used by the Russian military, and by Russian private military contractors.” (In a later thread, he explained in detail how he identified the trucks.)

Hutson provided some background on Sudan’s Russia connection, noting that on Nov. 23, 2017, al-Bashir met with Vladimir Putin in the Black Sea resort of Sochi, Russia. Reportedly “Bashir asked Putin to protect Sudan from ‘aggressive acts of the United States.’ In return, Bashir promised Putin that Sudan could serve as Russia's ‘key to Africa.’”

Hutson also described some earlier activity in Sudan. “Radio Dabanga (@RadioDabanga) reported in March 2018 that about 500 Russian armed forces appeared in the Um Dafug area of South Darfur, which borders on the Central African Republic.” At the same time, “across the border in CAR, the Wagner Group was defending mining interests.”

Four months after that, the three Russian journalists working for Khodorkovsky were killed, amid disputed claims of who was responsible. Ten days after Hutson’s tweet, the Telegraph reported damning evidence that Wagner itself was responsible, based on findings from Khodorkovsky’s Dossier Center, including cell phone records and other documents connecting the driver to Prigozhin. “The journalists were under the control of people from Yevgeny Prigozhin's structures starting from the preparation stage,” according to the Dossier Center.

Hutson has speculated that “the relationships between Putin, Prigozhin, the Internet Research Agency, the Wagner Group and Trump" could help explain the U.S. government's relative silence on the Sudan uprising. More recently, on Jan. 23, the State Department finally issued a three-paragraph statement of “concern,” stating that “A new, more positive relationship between the United States and Sudan requires meaningful political reform and clear, sustained progress on respect for human rights.”

In fairness, America's hands-off attitude might not have much to do with Putin. Like al-Bashir and the Sudanese regime, the Russian president may simply be taking advantage of long-standing pernicious habits and attitudes. That’s the picture suggested by Justin Lynch at the Daily Beast, in a recent article asking“Why is Sudan’s Genocidal Regime a CIA Favorite?”:

Although Sudan has been listed as a state sponsor of terror since 1993 and the U.S. has accused al-Bashir more than once of genocide for his government’s actions in Darfur, cooperation between the two countries has been close on particular issues that Washington sees as a priority, particularly the fight against terrorist jihadis.

This remained true, Lynch reports, even after Sudan dramatically reduced its counterterrorism collaboration in 2015.

As one of the last acts of the Obama administration in January 2017, the United States began a five-track process to restore relations that depend on humanitarian access, stopping violence and counter-terrorism collaboration. That process has expanded under the Trump administration, and in late-October the United States entered a second re-engagement with Sudan.

A few weeks later, the Sudan uprising began. And America has watched from the sidelines.

For all the talk about how disruptive and anomalous Trump's presidency is, and for all the justified concern about how compromised he might be by his Russian entanglements, the main impediment to America doing the right thing to support the people of Sudan may simply be short-sighted, sclerotic institutional continuity, just as it was during the Arab Spring.

We are right to worry about the future of democracy at home. But the Sudan uprising should remind us that we live in a larger world that we have often carelessly misshaped with our misguided actions and misplaced fears, even as we have also helped shape it with our ideals. In his famous 1967 address “Beyond Vietnam,” explaining his opposition to the war, Martin Luther King Jr. said that “our greatest defense against communism is to take offensive action in behalf of justice.” The same could be said about the various threats facing us today -- and that's what the Sudan uprising is calling on us to do.