What is it like to shoot someone? "Behind the Bullet" explores "moral injury" of gun violence 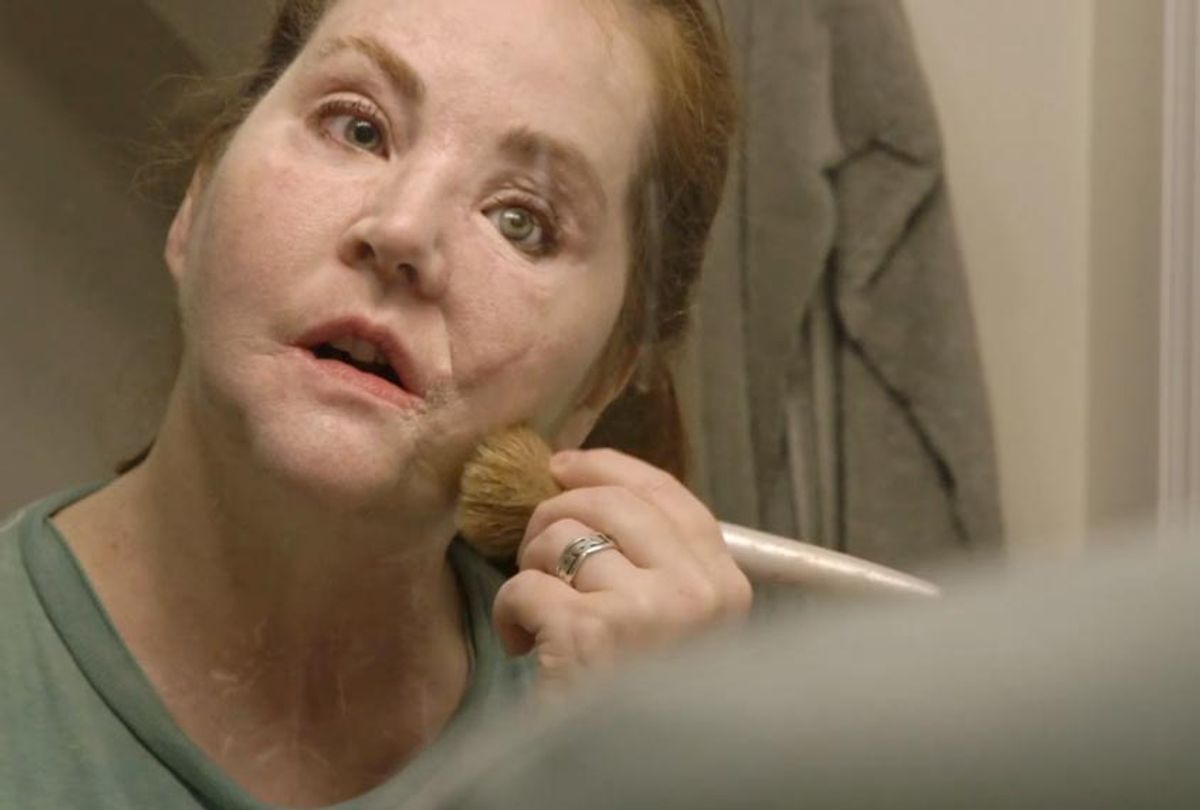 Christen McGinnes in "Behind The Bullet"
--

“Behind the Bullet,” a striking new documentary, is having its world premiere at the Slamdance Film Festival this weekend. The film looks at the issue of guns in America through the intriguing case studies of, as the documentary's website says, "four individuals who have pulled the trigger." Christen McGinnes is the victim of a gunshot wound that destroyed her face. She has had more than 40 surgeries to repair the damage and continues to receive treatment. Will Little is a barber in Philadelphia who spent ten years in prison for murder. He now educates youth and adults about guns and the dangers of violence. Kevin Leonard, who lives in the country, is still recoiling from shooting an intruder. Taylor Dwyer, 18,  accidentally killed his brother with his parent’s gun when he was eight. His father Daron uses faith to help him cope.

Director Heidi Yewman depicts these folks with sensitivity as they come to terms with their actions and in some cases seek forgiveness and redemption. The opening and closing moments provide statistics about the frequency of African American men killed by gunfire and the percentage of homes where there are guns and children under ten.

And herein lies the real power and politics of “Behind the Bullet” — each story speaks to a deeper issue. Salon spoke with Yewman about her film and how it portrays what these four individuals did, saw, and how their actions unfolded, as well as the impacts their experiences with gun violence had on others.

What is your personal experience with guns?

My dad was in the military and he had guns in the home, but I didn’t have access to them. I have shot guns. My interest came from graduating from Columbine High School 13 years before the massacre. Dave Sanders had been my typing teacher, basketball coach and mentor. When he was killed, I went back to attend his funeral. Sitting there, I thought, this is ridiculous. I wanted to get involved in gun violence prevention.

What was your criteria for the case studies in the film?

I wanted to tell the civilian’s side of the story. We hear on the news about cops or people in the military who suffer from PTSD after shooting someone, but I wanted to go to the untrained and tell their story. It was important I showcase a cross-section of people. They are all sort of stuck. It’s hard to move past these events because they are so traumatic.

Let’s discuss each subject. Christen is the victim of gun violence. You show her surgeries and healing. Her story is scratching the surface of a deeper issue, which is best left discovered.

She is the most optimistic person I ever met, which is astonishing given the damage that happened to her face. She was very beautiful before. She had some depression. She was very intentional with the gun incident and where it happened. She, like all the subjects in the film, had a gun for home protection or self-defense.

Will is inspiring as he promotes forgiveness, redemption, and peace. His story addresses African American men, their “low expectations of life” and gun violence. Can you talk about that subtext?

Will had the most time to change — 25 years. Christen’s incident was five years ago, Kevin’s was three, Taylor and Daron, it was 10. There’s been a lot of time for Will to think about this and lean in it and deal with his anger. Prison was like a “time out,” and he now speaks to kids all over Philadelphia. He is a big proponent of anger management and living a purposeful life.

Not a lot of films show the vulnerability of African American men in front of each other. It’s about bravado and being tough and surviving in the streets. I show these men talking about their pain and what they are trying to do to not let the next generation follow in their footsteps.

Kevin’s story made me think of Florida’s Stand Your Ground law. Yet he is haunted by his actions, reliving them every day and has trouble sleeping.

Kevin wasn’t arrested because he lives in Washington state, and the laws there make it so if someone’s on your property and you feel threatened—like Stand Your Ground in Florida. Kevin is what the NRA touts as “perfect” — he shot someone in his home. But he’s really good example of the complexity of this issue, the living reality of the complexity of using a gun. If you have a gun for self-defense like Kevin, and use it, there’s a consequence and a reality to that. You don’t shoot someone and move on with your day.

What are your thoughts about Taylor’s story? He is young, and taking his cues about processing his actions, guilt, and grief and blame from his religious father. He also continues to have a fascination with guns which is unsettling.

What I found interesting about him and his story is the role religion had, their faith — Daron is working his hardest to make sure this incident didn’t crush Taylor. Taylor is 18, and I’m not sure how much he’s been able to process it in that family system. Ten years ago, he told the cops what happened, and he doesn’t talk about it often. What you saw was really raw and uncomfortable for him. I was careful with that because of his age and where he was as a child. It was a real eye-opener to me, shooting the film in North Carolina, to see how connected faith and religion and gun ownership is. Shooting! . . . We have a very violent language. I often had to tell my cameraman not to say “we are going to shoot” Taylor.

How are the film’s subjects faring after the seeing the film?

I showed the film to all four of them [separately]. They all had reactions. Kevin had to leave the room at one point, but he said he hopes this film helps people in his situation. Christen cried through the last half and it thought it was profound and powerful and hard to watch. Will watched with his mom and sisters and they had a fascinating conversation after about how him going to prison and killing someone affected them, and how they all had feelings of shame and denial and hindering growth. Taylor and Daron watched it and didn’t say much. They were glad to be a part of it and were able to show how faith coped with guilt and anguish and loss.

You provide statistics in the beginning and end of the film about gun violence. Obviously, there is personal responsibility, but some policy actions can help. What can be done to stop gun violence?

I didn’t want to preach or provide solutions. I wanted to show the humanity of these things that happen that we see on the news every day. I’m not advocating for a particular policy but asking folks to think about the risks if you have a gun in your home.

Do you think there is a place for guns in our culture?

I think certainly, with the way that our country is founded, that guns are a big part of it. How do we live with the 300 million guns out there? How do we store them so things that happen to Taylor don’t happen? People don’t think that they are going to hurt themselves with a gun in their home. But I wanted to show the moral injury that happens when you shoot someone, because that isn’t really every talked about.