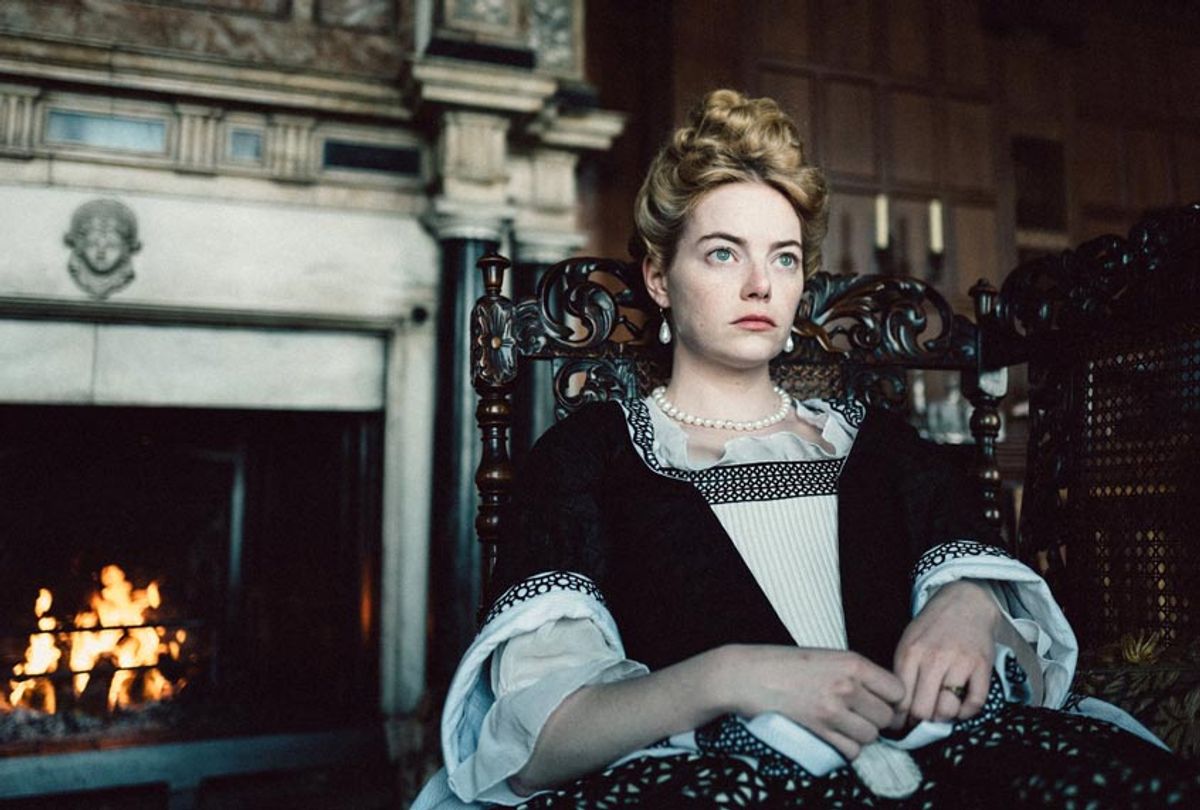 Fans have always known Emma Stone had it in her to play a stone-cold brilliant bitch. It was there along the edges of her break-out role as the high school nerd unfairly stamped a tramp in "Easy A," and who turns the tables on both cafeteria hierarchy and the sexual double-standard for girls as she sheds all of her effs and becomes fabulous. (The threat of it shaded her Oscar-nominated performance as recovering addict Sam in "Birdman," but her character's empathy, layered as it was under cynicism and disappointment, always pulled her back from the brink.) Alas, two turns as a doomed Spider-Man girlfriend alongside adorkable rom-coms opposite Ryan Gosling (fact check: is it possible to act any other way opposite Ryan Gosling?) threatened to derail the promise. Who would have blamed her if it did? Win an Oscar in a sweetheart role and expect to have more of the same come your way for as long as that lasts — just one reason why Stone's refreshing turn as tennis icon Billie Jean King in "Battle of the Sexes" was such a necessary palate cleanser.

But matching an Oscar-caliber bitch role to an Oscar-winning ingénue talent is a rare and special thing, and Stone serves as well as she receives with Rachel Weisz as Her Royal Highness Olivia Colman's "ma bitches" in Yorgos Lanthimos' "The Favourite." And while she has some formidable competition this year for the Academy Award for Actress in a Supporting Role — including perpetual nominee Amy Adams, and not to mention her own counterpart Weisz — I must demand that Emma Stone be given another Oscar for her portrayal of maid turned Queen's confidante Abigail, on the basis of one scene alone. Maybe not the supporting actress Oscar, mind you. Maybe the Academy could just create a new statue in her honor. Because I am talking about the most intense and intensely gratifying scene in the entire two hours of this intensely gratifying film.

I'm talking, of course, about the hand job.

Abigail, having dispensed with her rival temporarily and secured her position financially and socially through a strategic marriage to the noble Masham (Joe Alwyn) — "completely c**tstruck" by the maid — now must plot her next move. She paces and schemes on their wedding night inside her humble bedchamber while Masham, entirely out of his depth, grows more frustrated with his bride's lack of attention. His whining — justified, to be sure, but pointless and aggravating in Abigail's perspective nevertheless — reaches a fever pitch until she decides to mollify him. He thinks he's in for the wild shagging their play-violent courtship has prepared him for; she takes business in hand and, without even looking at him, silently and with no small amount of disdain relieves his tension.

It's a darkly funny scene, but in that uncomfortable minute or so Stone delivers — through the maniacal focus in her eyes as she mentally runs through potential plays and unexpected outcomes, her one arm in furious, unbroken goal-oriented motion — a master class in concentrated, frustrated female genius, determined that her work not be thwarted by this complaining dude by her side.

It's a fantastic piece of acting, but it's also so much more. Consider the unmatched utility and odd elegance of the jerk-off motion, apart from its associated sexual act, as sign and symbol; if peace fingers mark the iconic gesture of a previous generation's optimism, the jerk-off gesture can be our scornful counterpoint.

As a preteen in need of a silent profanity to throw at an authority figure's back, I knew the gesture before I understood the implications of its real-life mechanics, and the versatility of its implied contempt — slow with a smirk or fast with fury — endeared it to my kinesthetic vocabulary forever. It's never a call, always response; the thrower knows better than to demand a better offer, but is going to let the room know how trivial it has deemed whatever plate of B.S. is being served anyway, unworthy, in fact, of extended bargaining. It is never not funny. The jerk-off gesture is a classic conversation stopper — a small but potent act of spontaneous defiance in a world rigged against meaningful protest. It is the exact gesture I made toward this article in the New York Times today. It is a nonverbal "this guy" with all that implies.

If all of Twitter were reduced to doggos and endless GIFs of jerk-off gestures, would we even notice?

But what Stone does with all of the unspoken context of the gesture in "The Favourite" is next level. Applying her furious arm to the literal context does nothing to rob it of its symbolic power — and Stone's unyielding intensity only makes it that much stronger. "The Favourite" is a historical film entirely about three women, two brilliant strivers and one ruined but ultimately in control, and what they do to gain or maintain the power they each seek: over her beloved, over her country, over her future. The men in the story are completely inconsequential except as stepping stones or annoying hurdles to clear. How often do we get to see that expressed so clearly and unequivocally on film? The women of "The Favourite" don't care about men; they dismiss the notion that they should with an unimpressed up-and-down of a barely closed fist, and they make eye contact with you while they do it.

If Emma Stone can't win her next Oscar for that, I understand. The category, as I said, is a powerhouse this year, though the absence of a nomination for Letitia Wright earns at least an exasperated clenched fist to the heavens. But I've seen enough Academy Awards telecasts to know that the jerk-off gesture will make at least one appearance over the course of the evening, if nowhere else but in my living room, directed at some unjust triumph or grotesque display or shameless act of unearned self-importance. When it happens this year, Emma Stone: This one's for you.