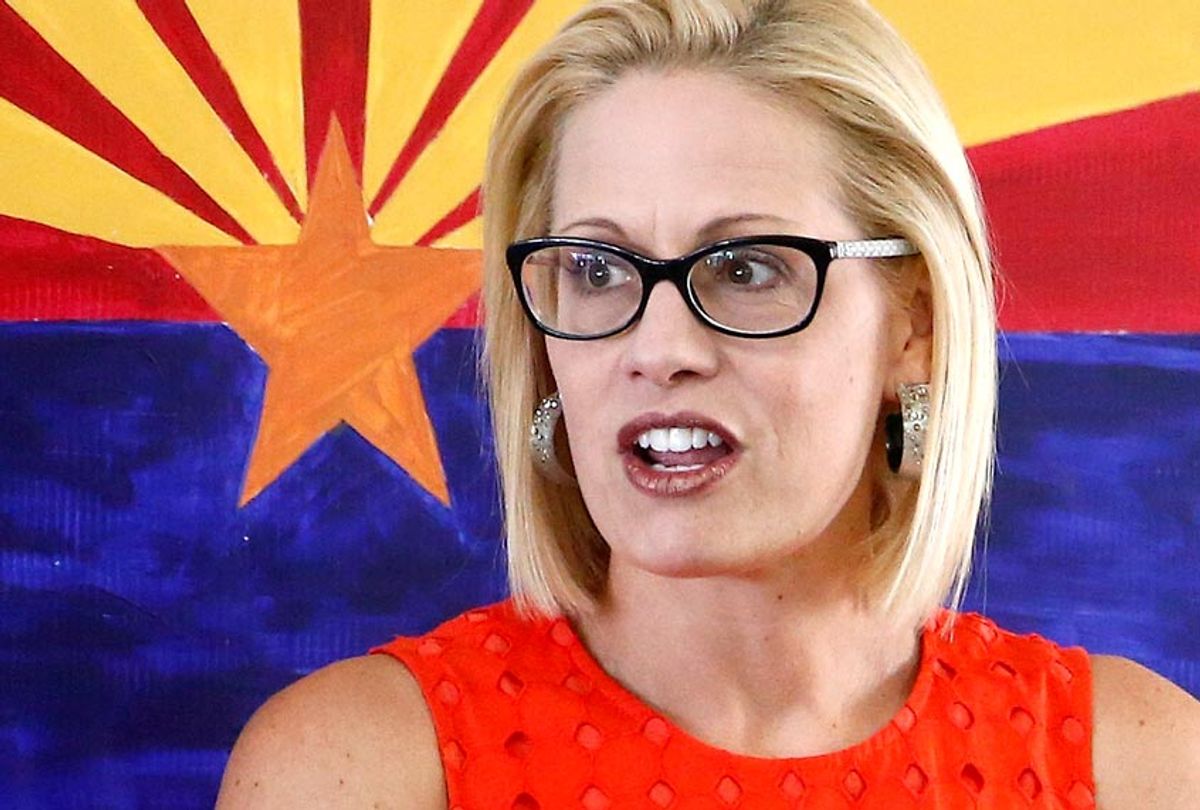 A recurring theme among far-right GOP culture warriors is that “liberals and progressives don’t share our traditional American values,” and the latest target of that theme is Sen. Kyrsten Sinema. Truth be told, the Arizona Democrat isn’t all that liberal: Sinema ran a decidedly centrist campaign in the 2018 Arizona Senate race, narrowly defeating Republican nominee Martha McSally. But many Republicans are outraged—or at least pretending to being outraged—because Sinema appeared on the Senate floor last week wearing over-the-knee boots with a minidress. One of them is Alabama State Auditor Jim Zeigler, who chastised Sinema on his Facebook page for being “inappropriately dressed” and tried to shame Democratic Alabama Sen. Doug Jones (who he might be running against in 2020) by posting a photo of Jones and Sinema together. This is the same Zeigler who passionately defended Roy Moore, the 2017 Alabama Senate candidate accused of sexually pursuing teenage girls when he was in his thirties.

Of course, allegations of pursuing under-age high school girls are much more serious than wearing over-the-knee boots to work. But Republicans like Ziegler never miss an opportunity to play the culture war card no matter how ridiculous they make themselves look. And Ziegler is so ridiculous that he believes he has discredited Moore simply by posting a photo of him in Sinema’s presence.

In all fairness to Ziegler, however, he is hardly the first Republican to express faux-outrage in response to a non-issue. Here are some of the silliest examples of GOP culture warriors expressing fake outrage over unimportant things.

Republican voters hate it when urban liberals and progressives describe them as rubes and hicks, which as the late author Joe Bageant (a self-described “redneck leftist”) often asserted, doesn’t help the left-wing cause. But no one shows more contempt for GOP voters than Republican politicians and strategists themselves—and a perfect example is Sen. Ted Cruz attacking Democrat Beto O’Rourke during the 2018 Texas Senate race for having played in a punk band back in the 1990s. That was Cruz’ dumb way of saying that Rourke didn’t represent Texas family values. And Alexandria Ocasio-Cortez, now a congresswoman, used Twitter to point out how “corny” Cruz was.

On August 30, 2018, the Queens/Bronx Democrat posted, “why is the GOP so corny?You can front a band and run for office. You can pierce your nose, be a bartender, a teacher, a stay-at-home parent; wear a dress or rip your jeans—none of this disqualifies you from advancing the fight for healthcare, education, housing and justice.”

After Ocasio-Cortez denounced Cruz and other Republicans as “corny” during her 2018 campaign, some of them were determined to prove her right. Since going to Congress, the 29-year-old New Yorker has been the recipient of one silly GOP attack after another, but the silliest so far has been the one attacking her because of a video that showed her dancing back in her college days. That attack, however, backfired in a huge way: Ocasio-Cortez mocked Republicans by posting a new video of her dancing—and in 2019, the term “dancegate” has been used sarcastically to ridicule Republicans for attacks that are just plain pathetic.

3. Fox News’ Sean Hannity was furious because Obama used mustard on a burger

Although Fox News will occasionally feature a right-wing intellectual—for example, Judge Andrew Napolitano or Chris Wallace—buffoonery dominates the cable news outlet. And Fox’s Sean Hannity is such a buffoon that even President Donald Trump, according to sources interviewed by the Daily Beast, mocks him behind his back. Hannity was typically buffoonish in May 2011, when he freaked out because President Barack Obama used Dijon mustard on a hamburger. Hannity was furious, insisting that Obama’s dietary choice was an outrage and showed how fundamentally unamerican he was. If Fox News employees cannot understand why liberals and progressives mock and ridicule them so unmercilessly, they need only check out People’s Exhibit A: Hannity’s 2011 freakout over Obama’s way of consuming a hamburger.

There are plenty of valid reasons to criticize Utah Sen. Mitt Romney, but the fact that he speaks French proficiently isn’t one of them. That’s something the Republican senator should be proud of. But former House Speaker Newt Gingrich disagrees—or at least he pretended to when he ran against Romney in the 2012 GOP presidential primary. Gingrich ran an ad attacking Romney for his French-speaking skills, which was the former congressman’s way of “othering” a fellow Republican and saying that Romney, like 2004 Democratic presidential nominee John Kerry, wasn’t truly American (Kerry also speaks French). Even by Gingrich’s low standards, that anti-Romney ad was unbelievably asinine. But it speaks volumes about how xenophobic and backwards Gingrich considers GOP primary voters to be.

Anyone who has even a rudimentary understanding of U.S. foreign policy or national security matters realizes that being able to speak a foreign language proficiently is a valuable tool for any politician—Republican, Democrat, Green or Libertarian. Former Florida Gov. Jeb Bush’s second language is Spanish, which he speaks well enough to appear on Univision’s “Al Día” and be interviewed by host Jorge Ramos (who is roughly equivalent to Brian Williams or George Stephanopoulos on Spanish-language television in the U.S.). But when Bush and Trump were competing with one another in the 2016 GOP presidential primary, Trump set out to “other” Bush by criticizing him for being interviewed in Spanish and told Breitbart News that Bush “should really set the example by speaking English while in the United States.”