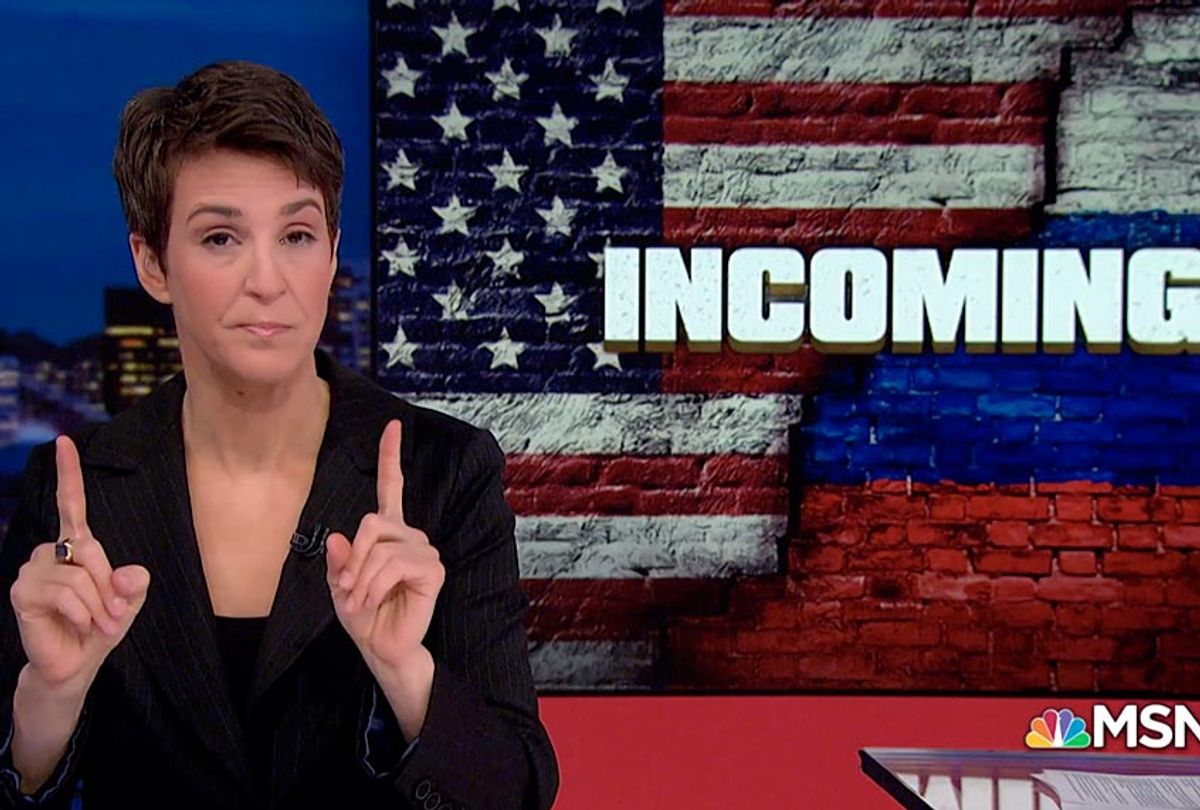 MSNBC anchor Rachel Maddow worried on Monday that President Donald Trump appears to be rationalizing his border policy based on something he saw in a fictional movie.

"Tomorrow will also be the first day of real oversight hearings in the new Congress, including the Democratically controlled House," Maddow noted. "One thing to watch for the Armed Services Committee tomorrow in the House is going to convene hearings on the situation in the southern border and specifically the absolutely remarkable, if now somewhat poor forgotten, fact the president deployed thousands of active duty U.S. troops to the U.S. southern border — while he was simultaneously making the case people should vote in the midterm elections on the basis of the terrible security situation at the southern border."

"Now, I don't know if that military deployment, if that expenditure of military resources, was just done for political effect to try to influence the midterm elections," she noted. "If it wasn't, it's presumably because the administration has another reason for that military deployment. The problem with that argument is that the president had a really hard time explaining what did justify that commitment to the border at that moment and in that way."

"For example — for example, I kid you not — the Trump appointed senior management at Customs and Border Patrol reportedly sent an emailed request for information to employees of that agency asking them for any factual backup they could locate to bolster the president’s repeated detailed assertions that part of crisis at the southern border is that women are being tied up with tape in cars to traffic them across the border while they are all tied up with tape," she noted.

"The president says this over and over and over again. There does not as yet seem to be any known factual basis for the president’s repeated claims that this is part of the crisis at the border," Maddow explained.

"There also does not seem to be any factual basis for the president’s claims that Mexican smugglers have amazing cars like you’ve never seen before, cars that are better than any other cars and much faster than the Border Patrol vehicles and that’s why U.S. law enforcement can’t keep up at the border because the cars aren’t as amazing as the amazing Mexico cars," she continued.

"We don't know why the president is saying either of those two things about the southern border," Maddow said. "The Border Patrol doesn’t know and Trump appointees were surveying members of the Border Patrol to find out if there was a factual basis for any of these things the president has been saying."

"It should be noted that both of those things, the women being tied up with tape and put in cars to traffic them across the border and the [cartels] having amazing cars U.S. law enforcement can't keep up with, those things do feature in a movie, Sicario: Day of the Soldado," she explained.

"In that film — which is fiction — one of the things that happened is there a woman taped up in the car. In that same movie, there are also Mexican smugglers with amazing vehicles that are too fast for American law enforcement to keep up with," she continued. "Also you know that thing the president keeps saying about the prayer rugs being found in the desert at the border? That is in that same movie, too."

"Again, all plot points in the same movie — which is fiction," she reminded.

"Now, in a normal administration, it would be insane to suggest — to even think about, to even joke about — the president of the United States seeing stuff in a movie and him maybe thinking it was real or at least real enough to justify a U.S. military deployment of thousands of active military troops to the border," Maddow said. "But in this case, women tied up with tape, put in a car and driven across border and the amazing magic vehicles and prayer rug thing, they do all appear to be from the same movie, rather than from the real world."

"I mean, is it possible that that is where the president cooked up these justifications for the crisis at the border and pretense for sending U.S. troops there right before the election?" she wondered. "Could that actually happen in real life? I don't know."