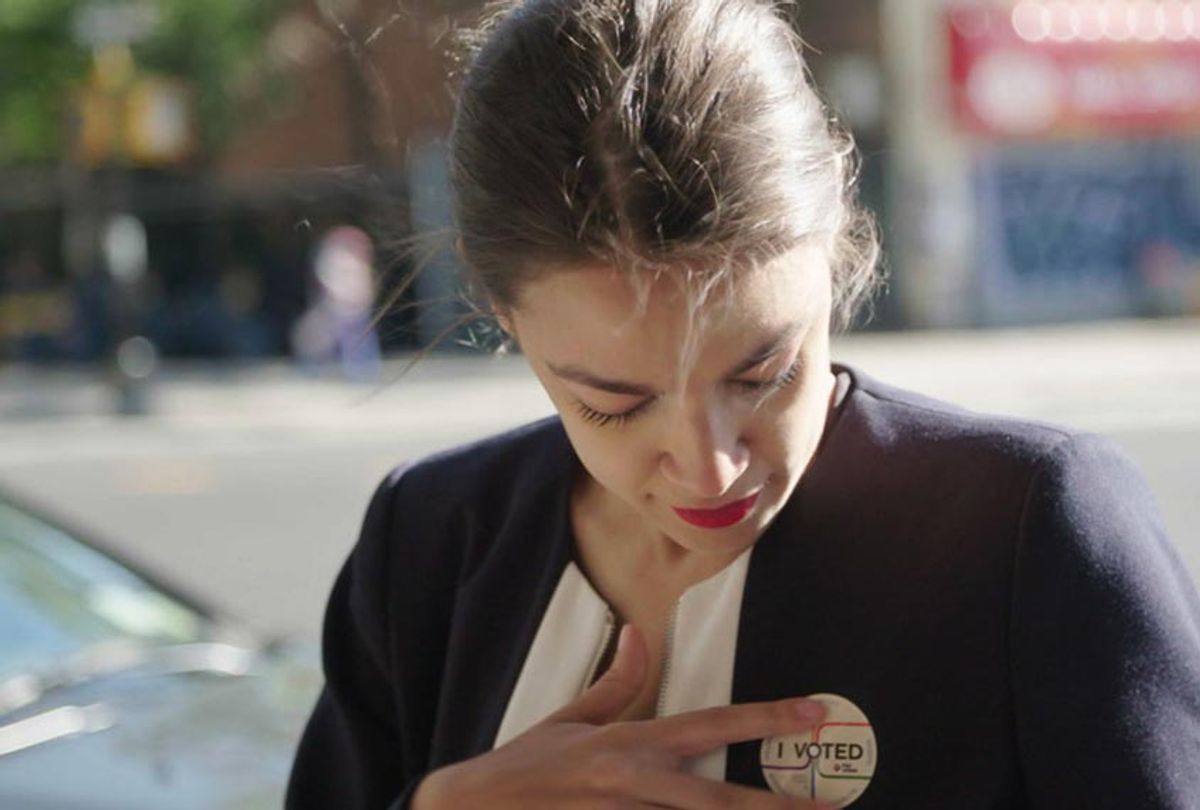 No one would believe the ending of Rachel Lears’ “Knock Down the House” if it wasn’t splashed all over the news months ago, but that doesn’t mean it doesn’t land with a gut punch and more than a few tears. Originally imagined — and, as evidenced by a successful Kickstarter campaign, quite literally pitched — as a documentary about the changing face of America’s political strivers, the inspiring film inevitably changed significantly along the way. The result is an immediate and engaging look inside a system so many newbies are eager to mold into a fresh vision, bolstered by the star wattage of a newly minted political powerhouse.

Lears’ film focuses on four first-time candidates scattered around the country, all women, all from working class backgrounds, all pursuing political office for different reasons, though the film inevitably gives way to the full-force power of Alexandria Ocasio-Cortez’s campaign and charisma. (Yes, the film ends with her New York primary win; no, it doesn’t blink at the inevitability that its audience is well-aware of what’s to come.) A film just about Ocasio-Cortez would certainly have been compelling enough, but it would have been lacking the central idea that drives Ocasio-Cortez and her compatriots: for one of them to break free, a hundred will have to fail.

Ocasio-Cortez may be the most visible of Lears’ subjects, but “Knock Down the House” has plenty of other interesting subjects to keep it ticking right along to election day, including Missouri’s Cori Bush, West Virginia’s Paula Jean Swearengin, and Nevada’s Amy Vilela. “No one owns you yet,” an advisor tells one of Lears’ running women, and it’s a sentiment that holds true for all of the film’s subjects. They’re not yet beholden to big money or big business or any other big force that will want to control them, and while that’s refreshing, it’s also terrifying for anyone who realizes just how this whole thing works. Many willhave to fail, but not all of them.

Lears and her team followed her subjects in the lead-up to some key 2018 primaries, and the fly-on-the-wall access granted to them is reflected throughout every moment of “Knock Down the House.” From knocking on doors to sobbing through upsetting polling results, the film chronicles all facets of running for office. At one point, Lears and company even trundle off to the Board of Elections to watch Ocasio-Cortez file the stack of signatures necessary to even land on the ballot; later, they focus on Bush and her team as she gets her official portraits snapped.

Nothing seems off-limits, and while that occasionally results in flat-lining sequences – one involving Ocasio-Cortez and her partner bickering about ice cream should have been snipped early on – the overall effect is a positive one, taking its audience inside all the minutiae of a burgeoning political career. Stylistically, the film isn’t at all fussy: on-screen graphics are straightforward and informative, and Lears leaves the editorializing out of her introductory captions, though the film’s score often proves manipulative during the most unnecessary of times.

Why pump up the drama with overbearing strings? This is as immediate and of-the-moment as things get these days without simply Periscoping the whole thing (or, in the case of the very engaged Ocasio-Cortez, Instagram-storying the whole thing) to a live audience. “Knock Down the House” takes its viewers on the inside of a propulsive movement that’s changing by the moment, an energetic look inside history as its being made, even when the results aren’t always the ones that are so fervently hoped for.

But sometimes they are, and “Knock Down the House” delivers a conclusion that has all the joy of anything written for the big screen, the kind of crowd-pleasing, fist-pumping, jaw-dropping final sequence of events that prove how much more compelling (and weird) real-life can be than its fictionalized counterparts. Even better? It’s only the beginning. Green light the sequel now, we’re going to need many more.

“Knock Down the House” premiered at the 2019 Sundance Film Festival. It is currently seeking U.S. distribution.