Howard Schultz built a driveway through a park: This is why he shouldn't be president 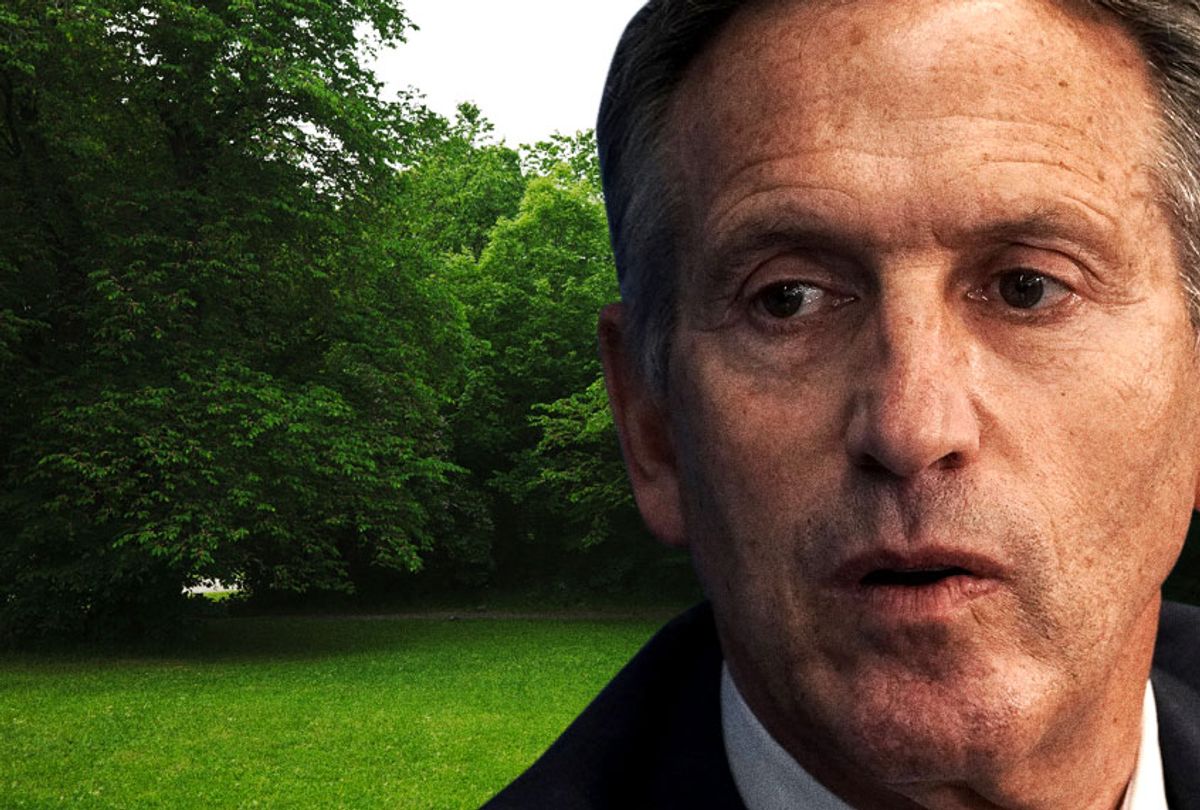 Whether or not Starbucks CEO Howard Schultz is sincere about conducting an independent presidential campaign, the media blitz he has received makes clear that this particular billionaire has nothing but contempt for the concept of the public good. Consider the way Schultz speaks about politicians who want to ameliorate economic inequality through progressive taxation: He has said they are "ridiculous," "misinformed" and even "un-American" for wishing to return to the tax rates of the mid-20th century. Schultz appears to be using the threat of a spoiler campaign in order to intimidate Democrats out of even talking about higher taxes on the rich.

But one story out of Seattle from the early 1990s regarding a public park and a private driveway perfectly illustrates the toxic brew of entitlement, contempt for the commons and overblown self-regard that is fueling Schultz's presidential flirtation.

"Quite a few of Howard Schultz's neighbors say the Parks Department never should have let him build a 100-foot driveway through the park next to his new home overlooking Lake Washington, near Denny Blaine Park," begins a Jan. 3, 1994, Seattle Times article written by Dick Lilly.

Schultz had purchased a parcel of private property on a Seattle hilltop that already had a driveway running through Viretta Park, but that wasn't enough. The coffee magnate wanted more than the existing "overgrown lane," so he got city permission to build a new driveway and even convinced Seattle authorities to waive the $25,000 fee they charged for using the park as a staging area during driveway construction.

"[P]arks employees apparently expected Schultz to make significant -- though unspecified at the time -- improvements to the park," Lilly wrote in 1994.

Instead, city officials realized that "the construction totaling more than $91,000 was glitzier than the Parks Department thought they had OK'd," as a different Seattle Times article, published four months later, explains.

Park employees discovered that Schultz had built a wall and planting area that extended into park land, and said Schultz had "far overstepped any approvals" for a driveway. Residents complained that the park was no longer usable for public recreation, its intended purpose. City officials reportedly had great difficulty even getting Schultz's lawyers to respond to their requests that he scale back his construction to meet the terms of their original agreement.

"The way in which the property is landscaped makes upper Viretta Park appear to be a part of Mr. Schultz's land," John Capps, then-president of a neighborhood group called the Madrona Community Council, said in a letter to the parks department.

As these things do, this dispute ended up in years of lawsuits before Schultz, having remade the park to suit his interests, abruptly moved to another part of town.

It's a small story in the scheme of things, and one echoed many times over in encounters between local governments and wealthy individuals. But illustrates why many in Seattle see Schultz as an imperious figure who believes that his wealth and success entitles him to behave like an entitled nobleman who is owed fealty by the rest of the city.

The most  prominent example, of course, is Schultz's 2006 sale of the Seattle SuperSonics, the city's fiercely loved basketball team, in a fit of pique when taxpayers refused to pay for massive renovations of KeyArena or build him a new arena. The new owners moved the Sonics out of town in 2008; they are now the Oklahoma City Thunder.

Schultz writes in his new book that he "will forever be deeply sorry" for the Sonics fiasco. But in truth, he's not apologizing at all. Instead, he's sorry that he miscalculated in believing that he could use the threat of moving the team to strong-arm the city into giving him massive sums of money for a new arena.

“My assumptions were a mistake," Schultz writes.

Seattle columnist Joel Connolly unloaded on the Starbucks tycoon on Monday, chronicling the loathing many Seattle residents feel toward Schultz for his "nonstop whining about the lease on Key Arena."

"I didn't think my opinion of Howard Schultz could get any lower after he stabbed our entire community in the back and sold the Sonics: But I guess he could stab the entire country in the back," Derek Richards, head of the the King County Young Democrats, is quoted as saying.

People who aren't sports fans may not understand this, but the loss of the Sonics came as a major blow to a city that has undergone massive changes over the past few decades. To get a taste of how bitter people were well after the fact, check out this concert rant from Soundgarden's Chris Cornell in 2011, three years after the Sonics departed for Oklahoma City.

"They took our [expletive] team from us. Since I was this high, I had that team. And they [expletive] took it away," he complained. "It's bullshit to take away a basketball team!"

Schultz's behavior towards Seattle illustrates the attitude that is also fueling his presidential ambitions: A belief that everyone else should kowtow to the billionaires, and that they owe nothing to their communities.

Like many of America's much-touted billionaires, including the one who somehow wound up in the White House, Schultz likes to describe himself as "self-made." This sort of rhetoric is normalized and mundane in the U.S., but it should be treated as the ridiculous joke it is. Schultz would be nowhere without the thousands of people who actually do the work every day of running Starbucks: The baristas, the construction workers, the coffee growers, the shipping employees and the office dwellers who run everything from customizing the holiday-specific drinks to the design elements that shape the brand.

Schultz, like every other successful capitalist, built his wealth on other people's labor and the support of communities like Seattle, which offer him roads and other infrastructure to operate his business with — and also bought his coffee long before it became a global lifestyle brand.

His response to all his home city's help and support was to sell Seattle's basketball team and build a driveway through a city park.

Honestly, I'm glad Schultz is doing this media blitz and threatening to run for president. He may think he's working to defend the low taxes and substandard regulatory structures that have allowed economic inequality to flourish. But he's not. On the contrary, every day his smug, entitled face is visible on people's screens, he makes the case for taxing people like him until they're brought down a peg, or maybe a billion pegs. He's a one-man showcase for why it's immoral to have billionaires at all.