Try to keep up with "Miss Bala": Gina Rodriguez stars in this entertaining if bumpy ride 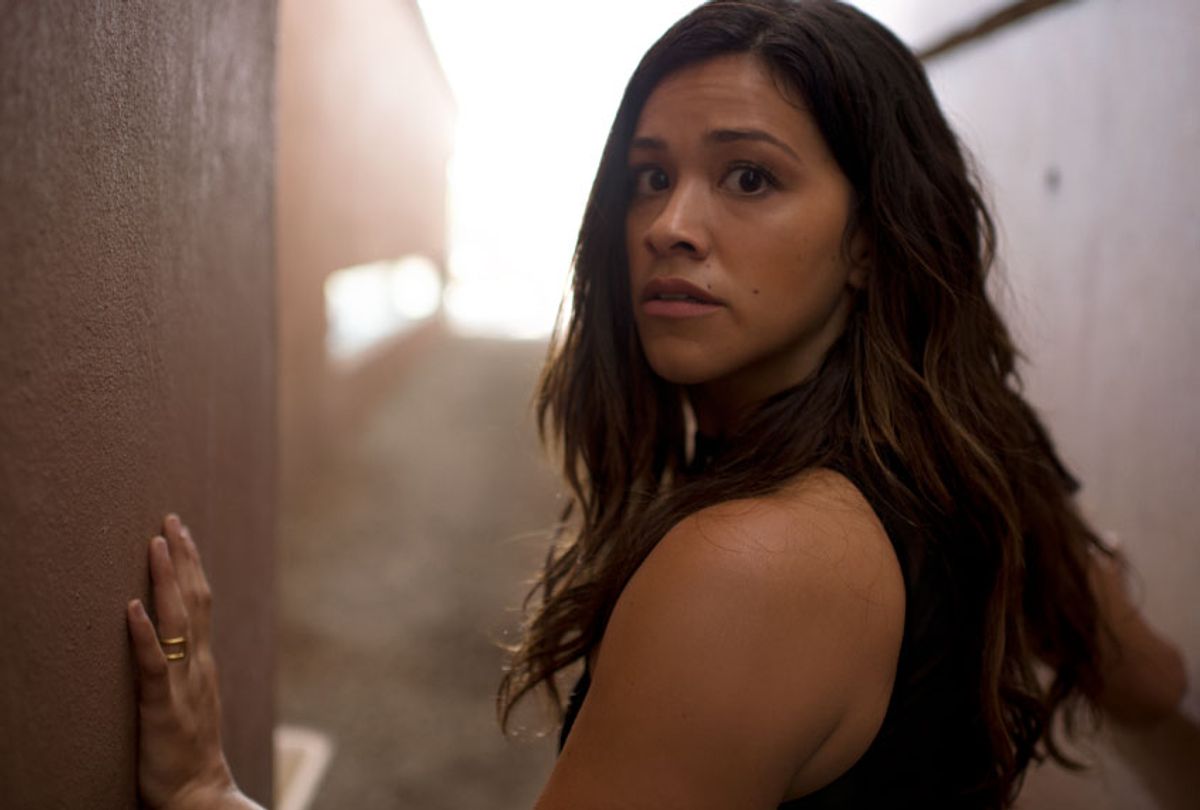 "Miss Bala," director Catherine Hardwicke’s decent remake of the 2011 Spanish-language film, is a kicky action thriller. Gloria (Gina Rodriguez), is an American makeup artist caught in an untenable position that ends up with her in a beautiful evening dress brandishing an AR-15 assault rifle. If that image doesn’t appeal, then neither will getting sucked into the vortex of danger that brings Gloria to this climactic moment.

Hardwicke’s relentless film moves at a rapid-fire clip that doesn’t allow too much time for its heroine to think — and viewers shouldn’t think too much either. Why try to puzzle out the meaning of a gang tattoo, or who’s the mole in a drug cartel, or how Gloria can sleep all night, undisturbed, at a table in a café after a shootout when she is busy getting kidnapped twice in 20 minutes? Miss Bala throws so much plot at Gloria and viewers that it’s easy to feel winded. Moreover, there are so many double crosses, it’s easy to get whiplash.

At the start of the film, Gloria heads from LA to Tijuana to visit her friend Suzu (Cristina Rodio), a hopeful in the Miss Baja California pageant. When the girls head out to a nightclub in short, slinky dresses they encounter trouble in the form of a man who gropes Gloria. Things get worse when an armed gang of men attack the club. Gloria gets separated from Suzu and is enveloped in a criminal world spearheaded by Lino (Ismael Cruz Cordova).

Lino, who is sleazy but seductive, gets Gloria to do what he wants — help blow up a DEA safehouse — in exchange for her life. He also promises that he will help her find Suzu if she does everything he tells her. (Thankfully, or judiciously, the film’s PG-13 rating means that Lino will only take things so far with Gloria sexually. The ick-factor here is palpable, but it’s not explicit.) Lino also feeds her some delicious barbacoa, so maybe he’s not all bad. But mostly, he makes sure Gloria is under this thumb at all times.

Well, except for that one little excursion she has where she accidentally meets (i.e., is kidnapped by) Brian (Matt Lauria), a DEA agent who wants Lino, and tells Gloria that she will be arrested for terrorism, murder, and arson if she doesn’t plant a tracking chip in Lino’s phone.

So, Gloria is basically caught between a rock and a hard place. But as Lino tells her in one particularly choice (if too on-the-nose) line of dialogue, “Chula, sometimes you have to do terrible things to survive.” And what Gloria does is terrible for everyone: she plays the ends against the middle and puts herself in great danger in the process.

But this is also why Hardwicke’s film is gleefully entertaining in a B-movie kind of way, zesty yet also corny at times. A scene where Lino, who grew up in Bakersfield, CA, gets all sensitive and talks about belonging neither in the U.S. nor Mexico, comes off as hackneyed. A film like this, where Gloria can’t trust anyone, doesn’t need character development. (It also doesn’t need politics, and gratefully, 45 and his wall are never once mentioned, even if they lurk silently in the background).

"Miss Bala" works best when Gloria shows not only that her character is resourceful, but also that she is remorseful — just watch her reaction when an effort to save herself inadvertently harms an innocent victim. Her character is constantly placed in some heightened state of suspense. Lino has her cross the border to San Diego with cash strapped to her chest and drugs hidden under her car. It’s a contrived scene, de rigueur for a film like this, but Rodriguez milks it for all of Gloria’s conflicted emotions. Gloria also gets caught in a shootout where she must make a split-second decision to save her life. This scene pulsates with energy and bullets and explosions, which is also par for the action genre.

If the original film had some long, impressive tracking shots, visually, Hardwicke’s version is more frenetic and kinetic. A scene featuring Gloria hiding under a bed during a shootout is notable for how bodies are shown hitting the ground from her ankle-level view point.

As the title character, Gina Rodriguez makes Gloria sympathetic as she alternates between being grace under pressure and becoming unglued. Her passive nature is meant to convey her scheming to extricate herself from an uncomfortable situation and her expressions suggest the high-wire act that she must perform. Rodriguez gets to cry, vomit, get angry, and shoot guys with an assault weapon, and she does it all with noticeable aplomb.

Cordova, however, seems to be channeling Benicio Del Toro in his performance. It can be distracting but also delicious. He makes a scene where Lino teaches Gloria how to shoot an AR-15 wonderfully squirm-inducing.

In support, Anthony Mackie and Aislinn Derbez have only a few scenes each, but both performers are memorable during their brief screen time.

"Miss Bala" keeps pulling the rug and the floor out from under Gloria and viewers. For those who go along for the wild, undemanding ride, it makes for a good Friday night action flick.