Is the era of unrestrained capitalism coming to an end? 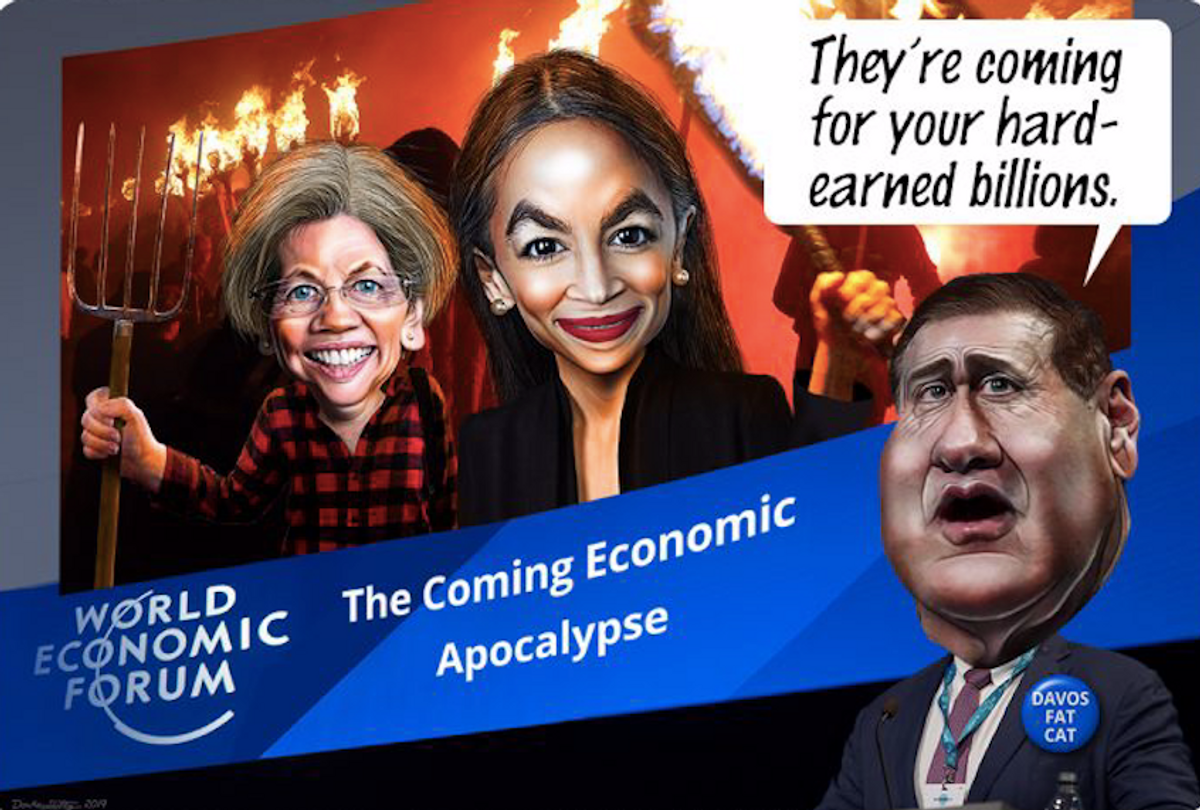 It is truly ironic that the world’s “elite” who gathered in Davos this week claim to be puzzled that people across the globe — frustrated by stagnating standards of living — are falling prey to nationalists and populists. To find the answer to this riddle, many of them could have saved the trip to Switzerland on their private jets and taken a long, hard look in the mirror instead — because they are the problem.

It’s really not so difficult: The greed of corporations and a few individuals has resulted in their amassing huge piles of money while leaving behind just about everybody else. An increasing number of people seem to be waking up to that fact.

But the claim that the Davos crowd is worried about populism and nationalism rings hollow. Many of the companies represented at the summit will gladly do business with anybody if it’s good for their bottom line. Case in point is the appearance of Brazilian President Jair Bolsonaro, the recently elected right-wing populist, who promised a tax-cutting, privatization agenda in his remarks. Oh, and the Saudis were also in Davos.

It seems pretty clear that the politicians and captains of industry rubbing elbows at the summit realize that the rise of populism is fueled by anger at the inequality that is playing out for everybody to see. Headlines like this aren’t helping their cause: “The top 26 billionaires own $1.4 trillion — as much as 3.8 billion other people.”

So maybe these “elites” are not really confused as to why people are getting frustrated but rather why now. After all, especially in the US, they have successfully conned the masses into believing that ordinary people will benefit from this accumulation of wealth, which will somehow “trickle down.”

That, too, is no big mystery. In the wake of the 2008 financial meltdown, only those at the top have recovered — and prospered — while the middle class is falling behind. Instead of addressing this growing problem, the Trump administration and Republicans in Washington handed a massive tax cut to corporations and those at the top.

This is not just happening in the US. A recent report commissioned by the Green Party in Germany shows that major corporations throughout Europe are gaming the system and paying much less in taxes than they are supposed to.

Which begs the question: If it’s so apparent why people are unhappy and why now, and if the Davos crowd has no qualms about palling around with populists and repressive regimes, what are they really worried about?

Could it be that they are coming to realize that they have squeezed the rest of the world too much and that things might get ugly?

The violent yellow-jacket protests in France could be a harbinger of what’s to come elsewhere in the world. At its root, that movement is about regular people objecting to being burdened with more taxes while the rich keep getting richer.

It’s interesting that this is starting in France, a country with a history of dealing rather harshly with fat cats. Let’s just say that US Commerce Secretary Wilbur Ross, who doesn’t seem to understand why not getting a paycheck would be a hardship for the 800,000 government workers affected by the shutdown, might have found himself on a guillotine in a Paris square had he made such an obtuse comment in another era.

It’s no surprise that one of the politicians in Davos who figured out what is happening is Bruno Le Maire, the French Minister of the Economy and Finance.

“I think that capitalism is not on the right track,” he told CNN this week, adding that his biggest worry is inequality in the world.

“There are many people in France, but [also] in many other countries that are disappointed by [. . .] capitalism,” Le Maire said.

While the heads of the super-rich probably won’t end up on a chopping block this time around, their bank accounts might.

Right now, populists are succeeding in large part because they make their voters afraid of the “other.” Whether that’s refugees in Europe, immigrants in the UK or “caravans” in the US, xenophobia is a driving force that helped propel Donald Trump to the White House, turned Matteo Salvini into a political force in Italy, and got British voters to support a Brexit that will be a disaster for them.

The reason this works is that many people see life as a zero-sum game. They believe that every time somebody gains something, somebody else is losing something of equal value. With that mindset, they are easy prey for populists who tell them that the “others” are getting the jobs or benefits meant for native citizens.

Upon closer examination, this is a laughable concept. Even if the zero-sum theory were true, whatever is spent on immigrants in the US, for example, is dwarfed by the amount of money that goes to billionaires and corporations. At the same time, the “trickle down” effect is exposed as little more than a pyramid scheme.

And that is why the jig may finally be up — and the folks in Davos are feeling the heat.

Some participants were openly worried about what will happen when they become the target, and not the beneficiary, of fiscal policies.

There was much debate on a proposal pitched by Rep. Alexandria Ocasio-Cortez (D-NY), who wants to tax income above $10 million at a rate of 70 percent. Her idea proved surprisingly popular. A recent poll found that 59 percent of Americans approve. That should not only frighten the one percent but also embolden Democratic presidential candidates to embrace a new type of economic populism as they try to craft a winning message for 2020.

Coinciding with the Davos meeting, Sen. Elizabeth Warren (D-MA) unveiled part of her plan to address inequality — and it is squarely targeting the uber-rich. The senator, considered one of the early frontrunners for the Democratic nomination, does not just go after income but also after existing wealth. Under Warren’s plan, the top 75,000 households would be required to pay an annual tax of 2 percent for each dollar they own above $50 million. That rate would go up to 3 percent for every dollar above 1 billion.

That might not sound like a lot, but Warren estimates it would raise $3 trillion over a decade, money she plans to invest in the middle class, a green new deal, college loan forgiveness, and health insurance for all Americans.

That certainly sounds better than a “trickle down” economy — especially because more and more Americans realize that what they have been getting from those at the top has been more of a tinkle.