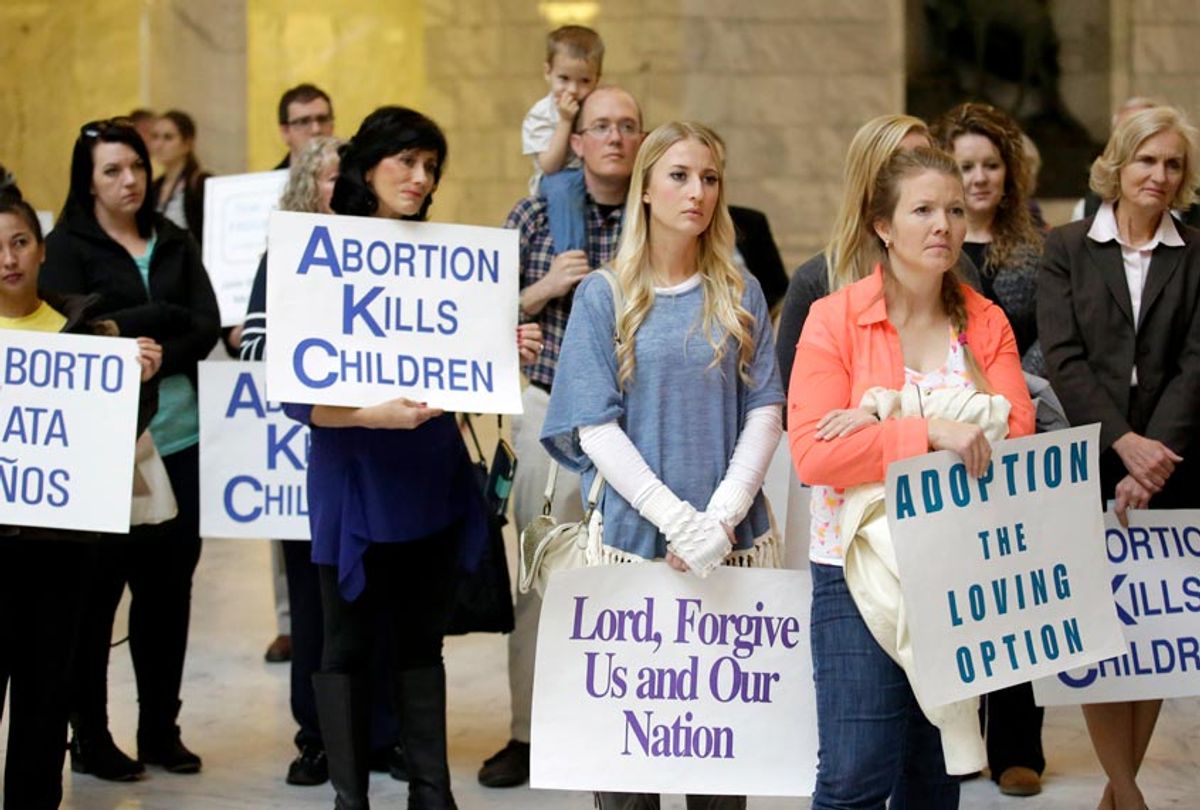 The right-wing disinformation went into overdrive late last week, taking comments about third-trimester abortions by Del. Kathy Tran, a Democratic member of the Virginia legislature, wildly out of context in an effort to claim that Democrats want to legalize infanticide. This incident highlights the lengths Republicans will go in the age of Donald Trump to lie and distort information in order to justify their increasingly unpopular agenda. Furthermore, the whole debacle also illustrates the viciousness of the misogyny that drives the GOP agenda on reproductive rights.

Tran has been pushing to remove onerous regulations on third-trimester abortions by reducing the number of doctors required to recommend such an abortion, which can only be done because a doctor deems it medically necessary. Right now, Virginia law requires three doctors to confirm a diagnosis, a requirement that can drastically slow down treatment for women who may be in dire medical need. Tran's bill would drop that requirement to one doctor.

In an effort to trip Tran up during debate, Republican Del. Todd Gilbert asked whether her bill would allow abortion on a woman who has gone into labor. Tran, caught flat-footed, allowed that it was legally possible. What she should have said was that such a hypothetical is ridiculous. Women don't do that and no physician would not go along with it, so it's a bit like asking whether a new law would permit abortions on space aliens or ghosts. But alas, she did not, and conservatives went hog-wild.

"Some seemed almost gleeful at the prospect of seizing the moral high ground denied them over two years of rationalizing a depraved administration," Michelle Goldberg of the New York Times wrote of the various right-wing figures — including Sen. Marco Rubio of Florida — posturing in public about their daring objections to infanticide, a practice no one actually supports.

Goldberg is right, of course. Conservatives are clinging to this opportunity to disingenuously accuse their opponents of advocating murder, because the genuinely relevant political issues of our time — such as a president threatening another government shutdown in order to punish a nation that won't let him build a border wall — are not things they wish to talk about. But this whole incident also showcases the over-the-top misogyny that motivates the anti-choice movement, even as it claims to pursuing this agenda out of pure love for fetal life.

The real outrage here is Gilbert's question, not Tran's inarticulate response to it. His "hypothetical" was really a form of defamation, painting the tiny number of women who get late-term abortions as lazy sluts, when in reality they tend to be women who are suffering personal tragedies or crises and who would very prefer not like to be in their current situation.

Dr. Jen Gunter, an ob-gyn who has done third-trimester abortions, wrote a blog post in response to this controversy, explaining how wrong-headed it is to assume that women get late-term abortions because they were too lazy or stupid to end the pregnancy sooner. No one, she explained, had ever asked her to terminate "a healthy pregnancy or even a pregnancy with minor abnormalities" in the third trimester, in all the years she's been doing this work. Instead, her patients were women who became "very ill around 24 weeks where the fetus is not expected to survive" or anomalous cases where the "pregnancy has anencephaly or any one of a thousand other catastrophic chromosomal or cellular collisions that can conspire against you in pregnancy."

In one case, Gunter's clinic saw a 12-year-old girl who was pregnant after being raped by her brother and was very late, at 32 weeks. There had been efforts to provide an abortion sooner, but the court-order process created an extensive legal delay.

A lot of the women in these situations are grieving, having lost a very wanted pregnancy. That's why some clinics who offer these rare abortions also offer grief counseling and other kinds of emotional care.

With his question, Gilbert fed into sexist stereotypes that sexually active young women are bimbos who are too stupid and careless to be trusted with their own medical decision-making. Every Republican politician and conservative pundit who echoed his slander amplified this message.

Despite the posturing about "infanticide," the real target of this misogynist messaging is not actually later term abortions, which are rare occurrences. Instead, the strategy is to perpetuate this image of women who have abortions as irresponsible sluts, and thereby lay the groundwork for denying them the right to abortion at any point in a pregnancy. After all, if women are too dumb and childish to be trusted with their own decisions about a pregnancy when the fetus has anencephaly and cannot live outside the womb, then surely they're also too dumb to be trusted with the decision about an early-term abortion performed as a matter of choice. Indeed, perhaps they should not be trusted to handle the contraception choice for themselves either.

That's the end game here. Late-term abortion is invoked because it's emotionally difficult and frankly gory, and is sure to trigger distraught reactions in almost anyone. But the people who are making a big stink about this right now don't want women to have legal abortions at all, and are willing to use disingenuous tactics and exploit women's suffering to achieve that goal.