Breaking news: Trump's "Face the Nation" interview makes clear he has absolutely no idea what he's talking about 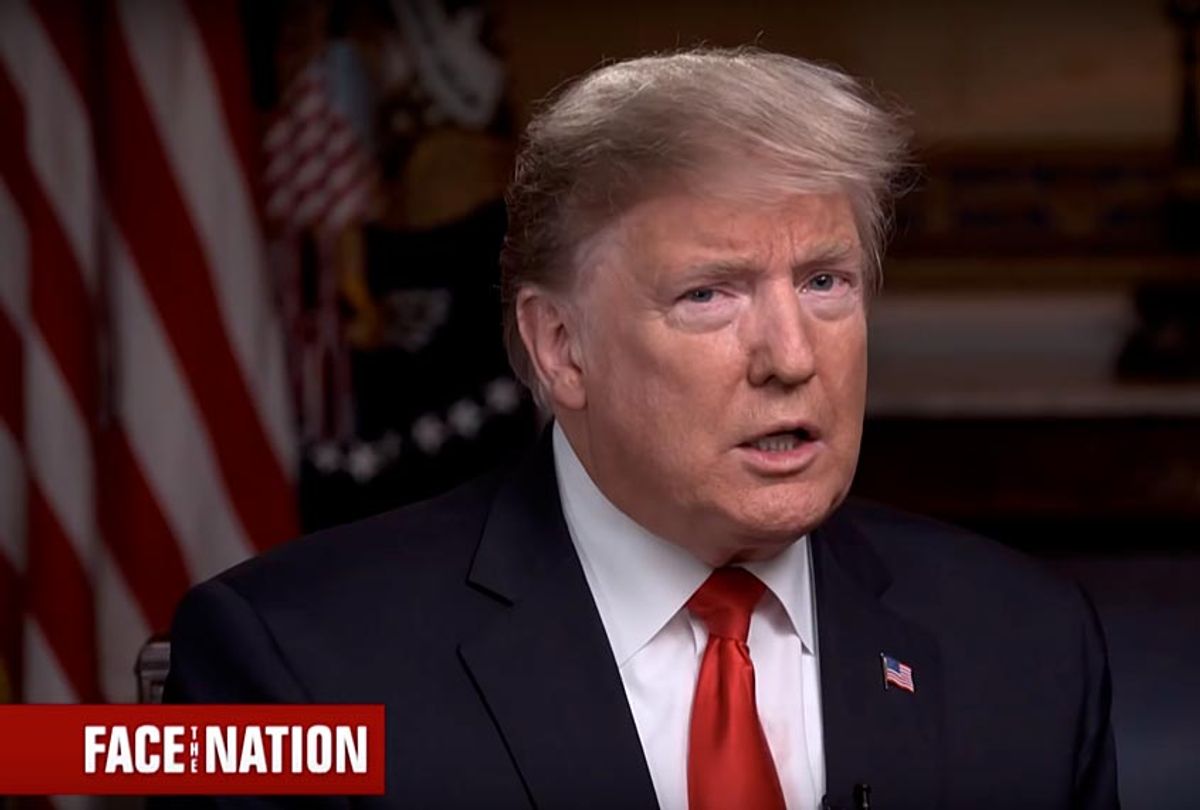 Donald Trump came up with a lot of memorable lines during the 2016 campaign, from "build the wall" to "drain the swamp." One of his most common, from the moment the general election campaign began, was a complaint that his rival Hillary Clinton didn't have the "strength and stamina" to be president. He made it clear over and over again that he believed the job of president was too much for her, and she wouldn't be able to handle the rigors of the job.

As it turns out, this was another case of Trump projecting his own weaknesses onto someone else. A White House source leaked some confidential official presidential schedules to Axios and they show that the man with the most important job in the world is barely working:

The schedules, which cover nearly every working day since the midterms, show that Trump has spent around 60% of his scheduled time over the past 3 months in unstructured "Executive Time."

"Executive Time" (also known as free time) was created by former White House chief of staff John Kelly when it became clear that Trump just couldn't handle a normal presidential schedule. Apparently, it takes up most of his day. (One Twitter wag pointed out that the schedule looks like a day in the life of one of his cats.)

Nobody is quite sure what the president does with all that time, but the last few days have shown once again that he isn't spending any of it boning up on national security and foreign policy. His understanding of world affairs is actually getting shallower and more confused than it was when he was elected.

Recall last week's presidential tantrum about the intelligence agencies' annual threat assessment testimony before Congress, when Trump petulantly tweeted that his intelligence chiefs needed to go back to school because their professional judgment differed from his. He backtracked a bit the next day, saying that he'd spoken to them and they'd told him it was all fake news. He called them to the Oval Office for a photo op and tweeted out this message:

The testimony was broadcast live and the threat report was released for public consumption, so there can be no question that they disagree with Trump's public pronouncements.

Then, in Trump's interview with "Face the Nation" on Sunday, he explained why he doesn't trust his own intelligence agencies:

I have intel people, but that doesn't mean I have to agree. President Bush had intel people that said Saddam Hussein ... in Iraq had nuclear weapons -- had all sorts of weapons of mass destruction. Guess what? Those intel people didn't know what the hell they were doing, and they got us tied up in a war that we should have never been in. And we've spent $7 trillion in the Middle East and we have lost lives ...

This is the opposite of what happened, of course. The ideologues in the Bush White House, who needed an excuse to invade Iraq, put pressure on the intelligence agencies to tailor their assessments to help them make their case for war. It's one of the most notorious examples of intelligence being slanted under political pressure in history. That Trump would use this, of all examples, is typical of the Bizarro World nature of his thought processes, particularly since one of the people he does purport to trust, national security adviser John Bolton, was a member of that administration.

According to this report in Time magazine, Trump may be creating exactly the same dynamic. A couple of senior level intelligence officials anonymously came forward in the wake of that confrontation with the intel chiefs to blow the whistle on a dysfunctional process:

Citing multiple in-person episodes, these intelligence officials say Trump displays what one called “willful ignorance” when presented with analyses generated by America’s $81 billion-a-year intelligence services. The officials, who include analysts who prepare Trump’s briefs and the briefers themselves, describe futile attempts to keep his attention by using visual aids, confining some briefing points to two or three sentences, and repeating his name and title as frequently as possible.

But the real problem is that Trump explodes in anger when they give him intelligence that doesn't back up his decisions or beliefs. Some officers have even been told to back off on giving him information that contradicts his public pronouncements. (By that we can assume his impulsive, ill-informed tweets and stream-of-consciousness blather during press encounters.)

Considering what Trump said on a variety of foreign policy issues in that "Face the Nation" interview, it's pretty clear that the brain trust isn't getting through to him, one way or the other.  He spouted volumes of nonsense, but did make news by saying that he planned for U.S. forces to stay in Iraq to keep an eye on Iran. After he saw that expensive base he visited recently, he decided "we might as well keep it."

He claimed that if al-Qaida or any other terrorist group revives after the U.S. pulls out of Syria and Afghanistan we'll just go right back in because "we have very fast airplanes." And anyway, that big base in Iraq means that we control everything and he will know if anything bad is happening before it happens. He said he'll be putting his own intel people he can trust in the region and they'll keep a lid on it.

That was just the tip of the iceberg. From North Korea to Venezuela to Russia, the EU and China, Trump is just blathering off the cuff, with no idea of the consequence of his words. It's possible that Bolton has his ear, but even that's not really clear.  It couldn't be more obvious that Trump has given all of this no more than a moment's thought and hasn't reconsidered even one idea that came into his head 30 or 40 years ago in light of new information.   It's impossible to predict what he would do in the event of a real national security crisis but we can be sure of one thing: It won't be the result of a thoughtful, rational process.

None of this is to say that the intelligence services are infallible or don't sometimes have an agenda. Trump is of course correct that the president has the authority to ignore their advice if he believes they're wrong. But for better or worse, given the choice between listening to the people who run those agencies at the moment and believing Trump's "gut," it's pretty clear who has more credibility.