An impending yellow vest moment for the US?

France has been gripped by them, but the yellow vest movement has so far failed to take hold elsewhere 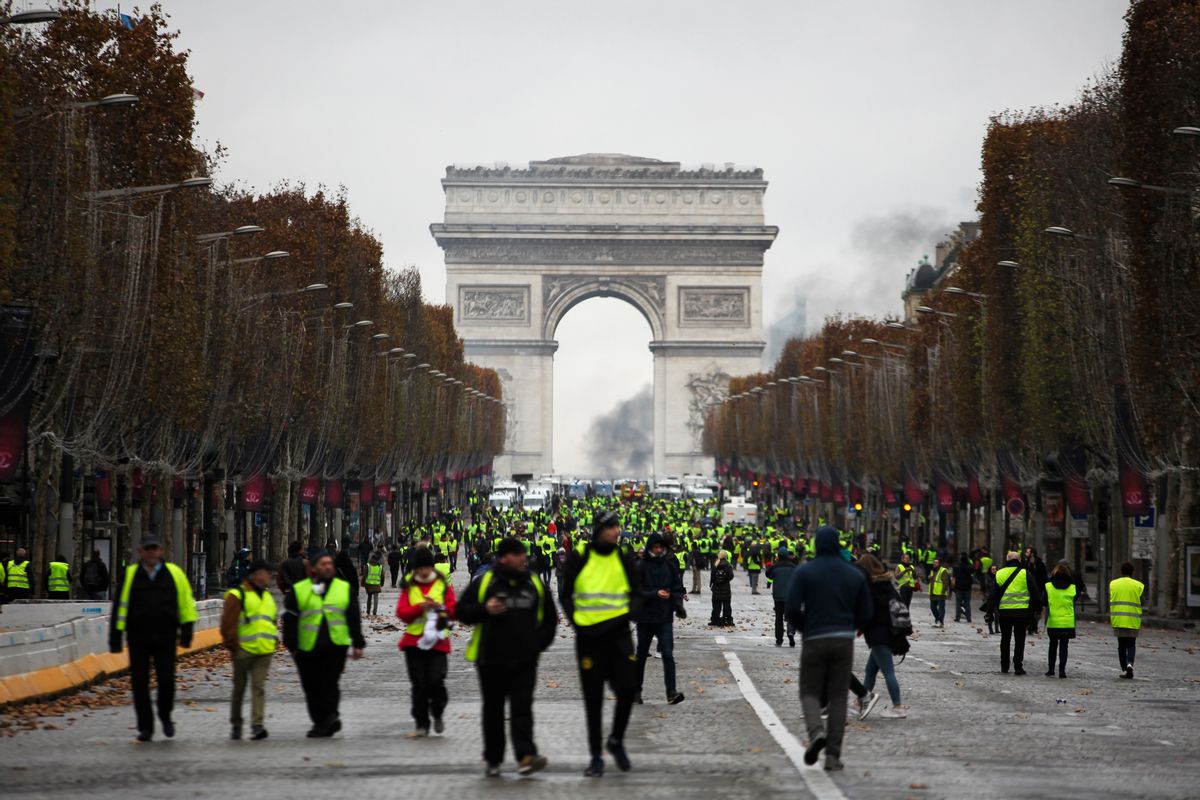 Demonstrators walk near the Arc de Triomphe during a protest of "yellow vests." (Gilets jaunes) against rising oil prices and living costs, on December 1, 2018 in Paris. - Anti-government protesters torched dozens of cars and set fire to storefronts during daylong clashes with riot police across central Paris on December 1, as thousands took part in fresh "yellow vest" protests against high fuel taxes. (Afp/getty Images)
--

France has been gripped by them, but the yellow vest movement has so far failed to take hold elsewhere. One country that may provide an ideal ground for it is none other the United States of America.

That seems a counterintuitive proposition at first, especially considering that billionaires have long been venerated figures in America. But as the populist wave that swept to power the most unorthodox president in American history has underscored, there is a palpable sense of frustration at work in U.S. society.

But now the odds are that the zeitgeist has shifted. The MAGA-crazed working man who voted Trump into the Oval Office was faced with a senseless government shutdown.

And this event forced by Trump has led to a different kind of mindset. Suddenly, American politics is about gas-in-the-tank and food-on-the-table issues which has the mega-rich looking nervously over their shoulder.

The examination of whether billionaires are a force for good or just scions of greed and inequality has been brewing for some time. The White House seems to have missed this sea change. And compared to the situation in France, the United States’s downtrodden really have to get along with very little support from the government.

In short, Americans in the lower half of the income distribution have a load of socio-economic reasons to move toward their yellow-vest moment.

After the longest partial government shutdown in U.S. history, over 60% of Americans feel the country is headed in the wrong direction, according to the latest national NBC/Wall Street Journal poll.

Those in power — not simply the President, but also the country’s economic elites—seemed blithely unaware that most Americans, even those working in the federal government, actually eke out a life that carries them from paycheck to paycheck.

As the shutdown persisted, the media was full of reports that Americans were turning to food banks, food stamps, driving Uber cars and fetching odd jobs just to get by.

The alleged immorality of Central Americans tunneling through the porous U.S. border became a distant second to the immorality of a billionaire, acting on his own volition to “lay off” 800,000 federal workers for two pay periods — and only to act on his pet peeve.

Against this Dickensian backdrop, Democrats hung this albatross of a shutdown around President Trump’s neck. Now, the mood has shifted. Witness Sen. Elizabeth Warren (D-MA), a 2020 presidential candidate, proposing a 3% tax on the super-rich — and being described as the Democrats’ Maggie Thatcher by the former Republican stalwart columnist George F. Will.

Worse yet for the Republicans, many are asking — thanks to Rep. Alexandria Ocasio-Cortez — with a far more open mind than hitherto whether the United States would be a better place if it were shaped in the mold of Sweden, a country whose is economy is dominated by capitalist family dynasties as well as a strong tradition of redistribution via the tax code to ensure everybody in the country gets to lead a worthy life.

How Trump is stuck

Stuck in the middle of this maelstrom is a now hapless President Trump. Walled in politically, Trump is surrounded by a fed-up GOP establishment on one side, and an emboldened Democratic House majority on the other. All that’s left to egg the president on in his quest for The Wall is his FOX News-loving base. And that was never a majority.

Considering that Trump only garnered a 46.1% “majority” in 2016, governing successfully with such a slim margin — and getting re-elected — requires a great deal of tact and judiciousness, leadership qualities that have long eluded this president.

Still, the Democrats are far from the all-clear when it comes to the 2020 race. Aside from having too many candidates (the Republican candidate class of the 2016 primaries will seem small by comparison), American politics has become a game of one-thirds: Each party fights for a precious sliver of independents, particularly women, to top off their own entrenched 33% of support.

In the wake of the government shutdown debacle, Trump’s sway over a significant swath of those voters appears deeply imperiled.

Fending off the mythic Democratic wave that augured a total mid-term election wipe-out for Republicans, Trump, it seemed, was a good bet to win in 2020. Pivoting from his siren call warnings of dangerous migrant caravans, Trump, in a fatal move, picked a political standoff with his toughest opponent yet, Speaker Pelosi.

Trump’s Make America Great (MAGA) revolution is not quite smoldering — yet. But the cavalry is coming.

As far as Trump is concerned, political solipsism is often fatal. That is why he may be destined to go out not with a bang, as even many Democrats currently assume, but with a whimper.

In the end, the sea change that will really matter though is whether 2020 represents the long overdue end of the Reagan Cycle, which began in 1980, with the presumed “morning in America” — which, by and large, turned out to be a morning only for the rich and super-rich in America.