The 7 best movies new to Netflix in February 2019

Thanks to the likes of "Jaws" and "Personal Shopper," the year's shortest month is long on good movies to stream 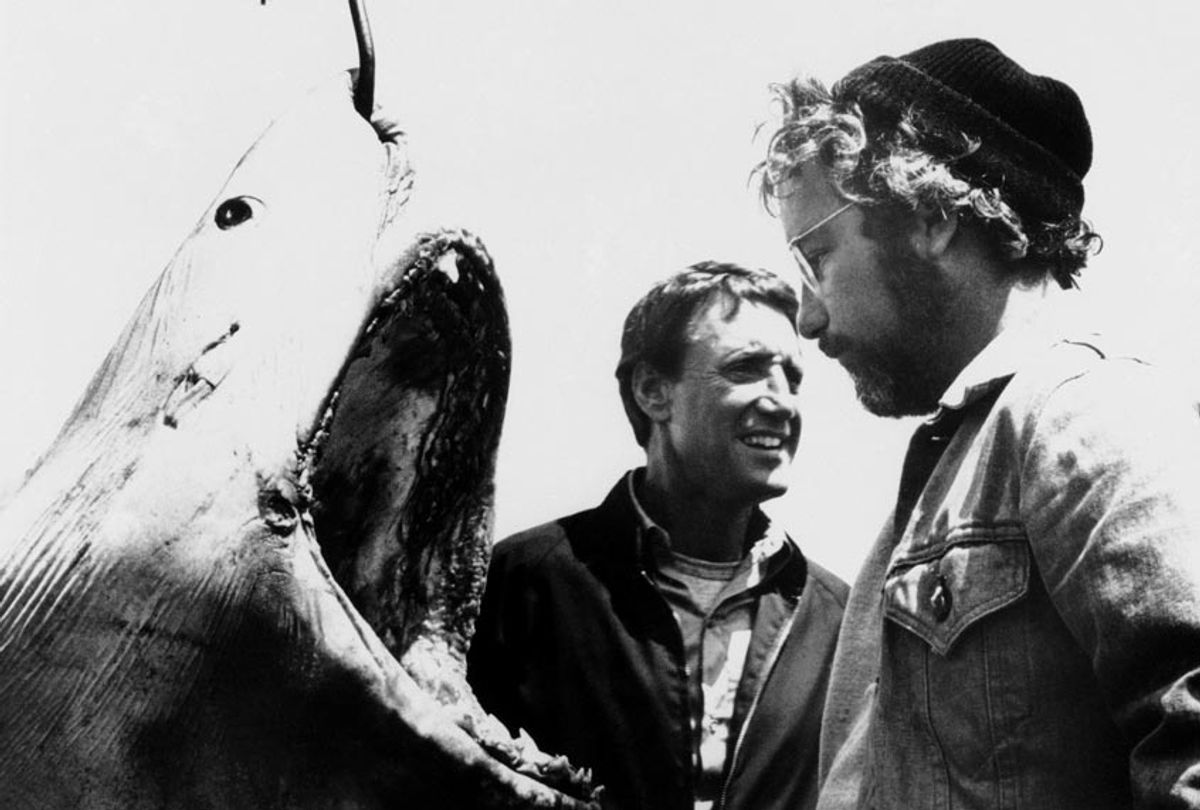 Roy Scheider and Richard Dreyfuss are shown in a scene from the movie "Jaws," 1975. (AP Photo)
--

February isn’t long enough to catch up with all of the titles that are coming to Netflix this month, so we’ve narrowed the roster down to the streaming giant’s seven most exciting new movies (click here for the full list of films that are coming to the service in the next few weeks). Between Steven Soderbergh’s phenomenal “High Flying Bird,” Olivier Assayas’ enduringly resonant “Personal Shopper,” and some old movie about a shark, there’s plenty to choose from as you wait for The Criterion Channel to launch in April.

And if these picks don’t do it for you, well, there’s always “Velvet Buzzsaw."

It’s still hard to believe that Chris and Paul Weitz followed the breakthrough success of “American Pie” — an epochal ode to high school horniness — with a Chris Rock version of “Heaven Can Wait,” and an unerringly sweet Nick Hornby adaptation, but those two guys always had bigger things on their mind than just discovering John Cho, pioneering the erotic pleasures and pitfalls of webcams, and forever tainting the basic concept of band camp (both continue to be successful filmmakers, and Chris has been an instrumental force behind powerhouse indies like “Columbus” and “The Farewell”). At the time, however, it was shocking to see them deliver a film as raw and well-realized as “About a Boy.”

Detailing the unlikely friendship between a misanthropic bachelor and a misfit British pre-teen, this snide (but never cynical) movie is bolstered by a then-revelatory performance by Hugh Grant, a remarkably nuanced debut from 12-year-old Nicholas Hoult, and standout supporting work from Toni Collette and Rachel Weisz. And, just for good measure, it’s also capped off with history’s most uncomfortable rendition of “Killing Me Softly with His Song.” All in an effort for this motley crew of shipwrecked characters to learn that no man — or woman, or little kid with an ill-advised bowl cut — is an island.

For what it’s worth, “American Pie” (and its sequels) are also now streaming on Netflix.

The further we go into the future — and the more that movie theaters are dominated by superhero epics and Freddie Mercury biopics — the easier it gets to long for the glory days of two-and-a-half-hour James L. Brooks dramedies. Even the most labored and uncomfortably mannered of his romantic treatises on human neuroses (or his neurotic treatises on romantic humans) are essential viewing.

“As Good As it Gets” isn’t quite as good as it gets; it lacks the emotional force that defined “Terms of Endearment” and the whip-smart sense of purpose that carried “Broadcast News.” Nevertheless, this Oscar favorite is charming in spite of itself, and contains enough strong character work to sustain an entire season of a Netflix show. Jack Nicholson gives one of his best (or at least one of his most) performances as the crotchety Melvin Udall, an obsessive-compulsive writer who bullies everyone in his path, and their little dogs, too. Neither Melvin, nor a gay neighbor played by Greg Kinnear, would be able to escape the buzzsaw of public opinion if this film came out today, but their relationship still holds together thanks to the inviolable bond of movie logic. It’s Helen Hunt, however, who provides the heart and soul of this now-unfundable story, playing a kind waitress with a sick kid and little hope for a brighter tomorrow. She might be a bit too good (and a bit too old) for Melvil, but, well, she makes him want to be a better man.

Kelly Fremon Craig’s directorial debut confronts millennial teens with the same authenticity and verve that helped “Fast Times at Ridgemont High” jumpstart a revolution when it crash-landed into the ’80s. And yet, labeling this as a new version of an old phenomenon would be a terrible disservice to the wryly hilarious and unflinchingly honest film that Craig hath delivered unto us — like its hard-luck heroine, “The Edge of Seventeen” acts like a hand-me-down but thinks like a true original.

Produced by James L. Brooks, the film seeps from the brain of a teenage virgin named Nadine Byrd (a never-better Hailee Steinfeld), who feels like a pariah even before her best friend (Haley Lu Richardson) starts dating her perfect jock of a brother (Blake Jenner). Unfolding like a symphony of small humiliations, there isn’t a moment in this movie that doesn’t feel at least vaguely familiar, and there isn’t a moment in this movie that doesn’t feel completely true. Nobody is going to confuse “The Edge of Seventeen” for a Dardennes-like docudrama, but the film combines the accessibility of a Hollywood comedy with the unromantic bleariness of a grey fall afternoon. Your teenage years can feel like an open wound, and Nadine is worried about bleeding out before her hurt scabs over. “There are two types of people in the world,” she tells us: “The confident, and the people who hope the confident die.” Maybe that’s true, but the witty and altogether wonderful film that Craig has crafted around her suggests that most of us fall somewhere in the middle as we learn how to live with ourselves.

Indisputably one of the most influential films of the 21st century, Judd Apatow’s directorial debut ushered in the golden age of the bromantic-comedy, pivoting away from the toxic masculinity typified by movies like “Wedding Crashers” and inviting the men of America to grow the hell up and get in touch with their feelings. Using the multiplexes to reach an audience that “Freaks and Geeks” never could, “The 40 Year-Old-Virgin” anointed a new generation of comedy stars en masse: It introduced the world to the likes of Seth Rogen and Jonah Hill, it cemented Steve Carrell as a leading man, and it allowed everyone from Elizabeth Banks to Paul Rudd to reassert control over their images and take their careers to hilarious new places. It also anticipated a dark future where Stormy Daniels would become a lightning rod for men who don’t know how to handle their sexual frustration, but that’s neither here nor there.

Even now that Apatow has become an empire unto himself, this good-natured story about a sexually stunted tech salesman and his moron co-workers is still one of the funniest things that he’s ever made. Or that anyone has ever made. By this point, just about every line of dialogue has made its way into our collective vernacular (rare is the movie powerful enough to turn a pop star’s name into a bonafide expletive), in large part because “The 40-Year-Old Virgin” has aired on cable TV almost as many times as that infernal Kars-4-Kids commercial. Now that this epochal masterpiece is on Netflix, you can finally watch it on an endless loop without the VH1 logo taking up half the screen.

Steven Soderbergh doesn’t seem to care if his characters are right or wrong; he just likes watching them struggle to assert their own value against an indifferent system — a corporation, a government, or a virus — even if that struggle costs them everything in the end. In his phenomenal new “High Flying Bird,” a Promethean sports drama that hums with the verve and purpose of Soderbergh’s very best work, that system is the NBA. And it’s profoundly broken. Not because the fans have stopped buying tickets, but rather because the old white men who own the teams want to feel as though they own the young black players, as well. (“I love the Lord and all his black people” goes the refrain every time anyone in this movie compares slavery to professional basketball.)

As you might expect from a collaboration between the director of “Out of Sight” and the writer of “Moonlight,” “High Flying Bird” is a clever film that moves fast and reverberates with past trauma and the promise of new hope. André Holland stars as Ray, a sports agent who’s 25 weeks into a league-wide lockout and desperately trying to hold on to his job. A lockout  should theoretically be Ray’s chance to shine. It’s his chance to move mountains, and reshape the firmaments in favor of its stars. It should be, but that’s not how it works; it’s not how the game on top of the game is played. If Ray is to talk his way out of Tarell Alvin McCraney’s sly and snippy script, he’ll have to pilfer back enough power to change the rules to his advantage. Watching him do that — and watching Soderbergh bend this business-oriented story into one of the most fun thing he’s ever made — is hugely satisfying from start to finish.

Olivier Assayas’ “Personal Shopper,” which is among the most affecting depictions of the grieving process ever committed to the screen, reinvents the ghost story by approaching it with radical directness and a singularly modern sense of self. And somehow, despite the fact that it includes a scene in which a phantom projectile scream-vomits hot white ectoplasm into the air above Kristen Stewart’s face, it’s also one of the most realistic.

Read more IndieWire: How Kristen Stewart and Olivier Assayas Bring the Dead Back to Life in ‘Personal Shopper’

Bracingly direct one moment and stubbornly elliptical the next, “Personal Shopper” isn’t just a story about a young woman trying to connect with her brother across the beyond, it’s also a story about how technology shapes the way people remember the dead and process their absence. Stewart stars as Maureen, a celebrity assistant who moonlights as a medium in the hopes of making contact with her late twin brother. And since spiritualists are magnetized to spectacle, it’s only natural that Maureen is constantly staring at her iPhone, using it to google the paintings of Swedish mystic Hilma af Klint or watch an amusing clip from a (fake) old TV drama in which Victor Hugo conducts a hokey séance. These digital communions lend Assayas’ laconic thriller the feeling of a Russian nesting doll, each layer hiding a new dead body, and the film’s centerpiece sequence remains the greatest texting scene in movie history.