“I want people to come into our country in the largest numbers ever, but they have to come in legally," Trump said 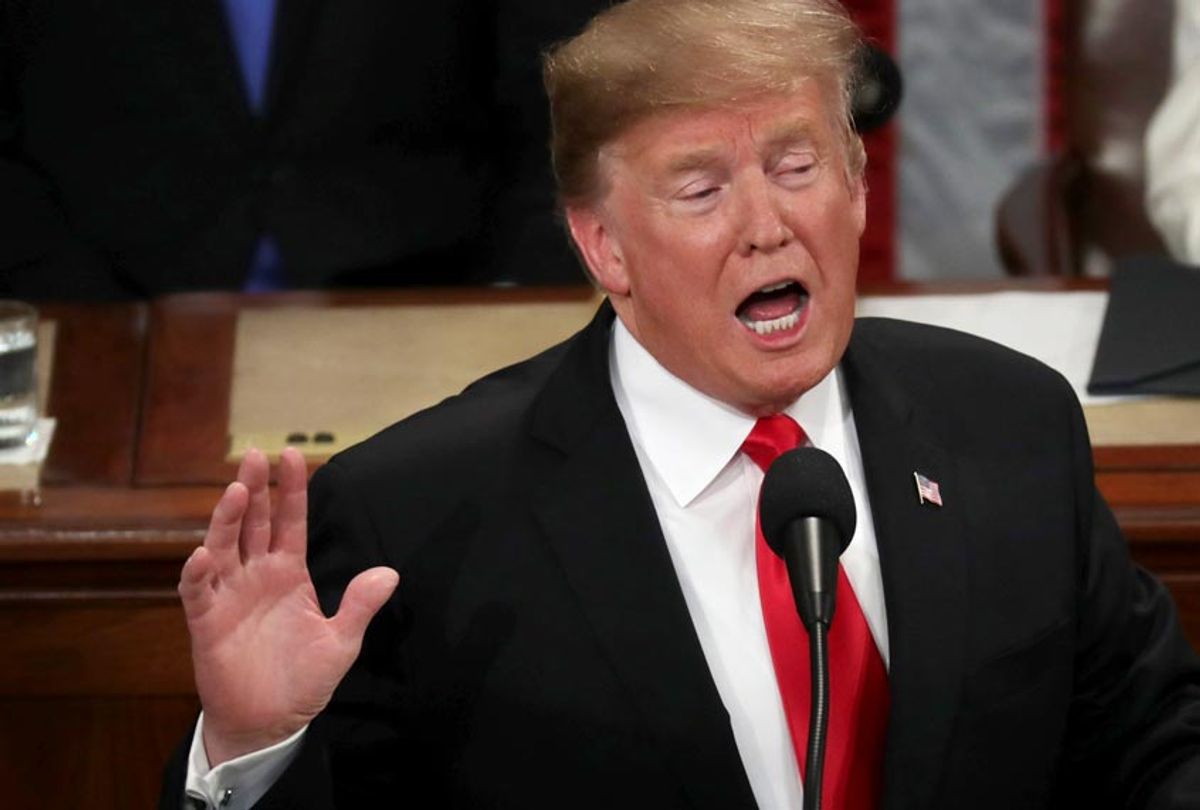 President Donald Trump spoke from prepared remarks Tuesday night as he delivered the State of the Union address before a joint session of Congress.

As Toronto Star reporter Daniel Dale has noted, Trump’s on-script speeches tend to be much more accurate than his off-the-cuff rally tirades, which are filled to the brim with lies and distortions. When he speaks from a teleprompter, his staff produce formalized comments that sometimes withstand fact-checking scrutiny better than his usual claims.

But he still made many specific, demonstrably false claims. The greatest lie, though, was the basic premise of his speech: a supposed call for unity. Instead of a unifying rallying cry, it was filled with much of his typical divisive attacks and vicious fearmongering, particularly about immigrants.

Here are seven of his other false claims and distortions Tuesday night:

1. “After 24 months of rapid progress, our economy is the envy of the world, our military is the most powerful on earth, and America is winning each and every day.”

The implication here that Trump’s presidency oversaw a huge resurgence in the military and the economy is just flat-out false. The United States’ military has been the world’s biggest (and most wildly expensive) for generations long before Trump came around. And while the economy has continued to grow under this president, it has essentially carried on the trajectory it started under President Barack Obama.

2.  Trump claimed that the United States’ economy is the “hottest economy anywhere in the world.”

While “hottest” is a vague term, many economies are in fact growing much faster than the United States’. The New York Times explained:

The American economy expanded at an annual rate of 3.5 percent in the third quarter of 2018, the most recent available data. Growth in Latvia and Poland was almost twice as fast. Same for China and India. Even the troubled Greek economy posted stronger growth. And a wide range of economic analysts estimate that the growth of the American economy slowed in the fourth quarter, and slowed even further in the first month of 2019.

3. He said that under his administration, the country has “added 600,000 new manufacturing jobs.”

This is false, as Dale explained:

4. Under his administration, Trump said, the economy added 5.3 million jobs.

In fact, the economy has added 4.9 million jobs in the past two years, according to the Bureau of Labor Statistics.

5. Trump said there is an “urgent national crisis” of illegal crossings at the border.

Under Trump, border crossings have actually been at record lows for recent decades. He used to boast about this fact until he realized he needed to drum up a rationalization for his border wall.

While that is an uptick from the monthly average in the fiscal year that ended in September 2017, the numbers pale in comparison to early 2000s, when border arrests averaged about 100,000 per month.

A record number of families have tried to cross the border in recent months, overwhelming officials at the border and creating a new kind of humanitarian crisis.

6. Trump falsely said that, after having an extremely high crime rate, El Paso became “one of the safest cities” because of a border wall.

Trump has said this many times before, and it is absolutely false.

“That is a straight-up lie about El Paso, which was one of America’s safest large cities for violent crime before the fencing was erected and did not immediately see crime fall after the fence was built,” said Dale.

7. “I want people to come into our country in the largest numbers ever, but they have to come in legally.”

This was a brazen obfuscation of his own views. Trump has previously promoted the RAISE Act, which would cut legal immigration rates in half. He has also railed against so-called “chain migration” — immigration based on family ties — and the visa lottery, and he has fought to reduce both.