Jill Abramson's "Merchants of Truth": A "fight for facts" marred by plagiarism allegations

From fact-checking issues to plagiarism accusations, Abramson's findings on journalism continue to be questioned 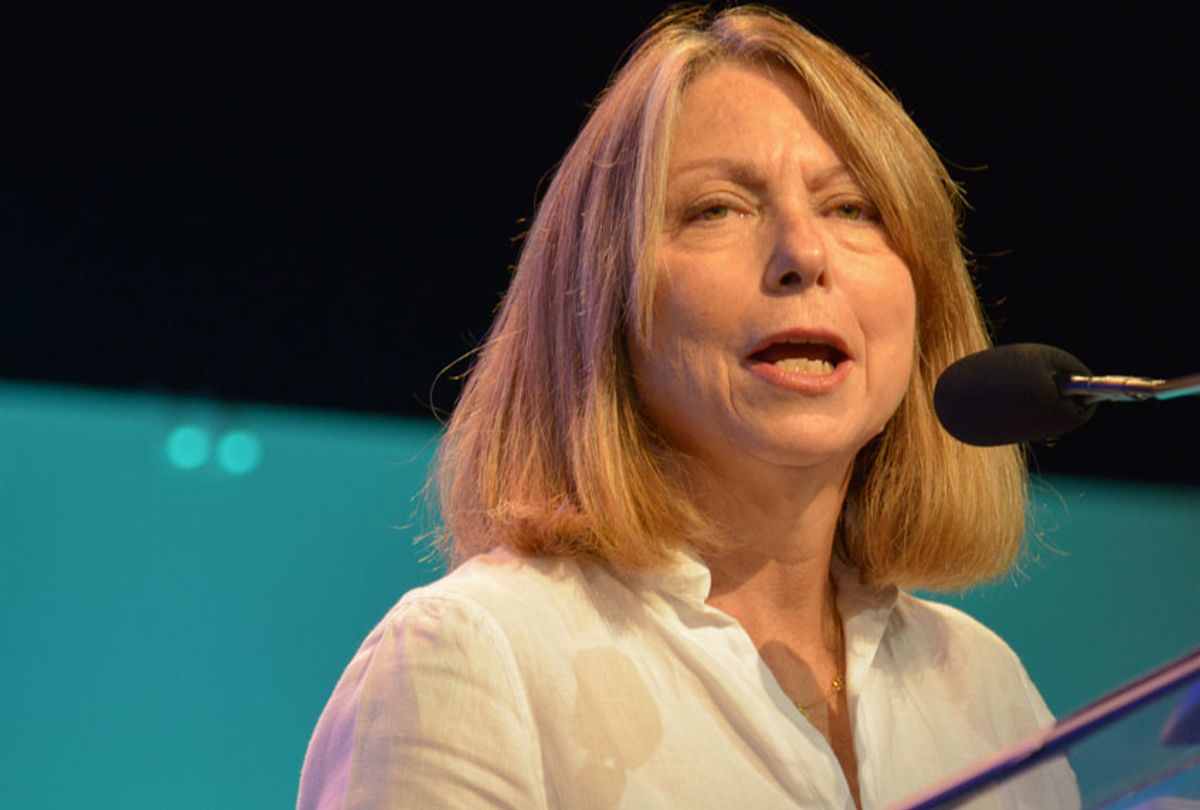 Before former New York Times Executive Editor Jill Abramson's new book "Merchants of Truth: The Business of News and the Fight for Facts" even hit the shelves, it was already in the center of a controversy.

The book is described as "the definitive report on the disruption of the news media over the last decade," follows four news organizations: The New York Times, The Washington Post, Vice and BuzzFeed, and documents how the media companies navigated  "a revolution in technology, economics, standards, commitment, and endurance that pits old vs. new media."

At first glance, Abramson seems like the perfect narrator for this endeavor, as someone who ran the Times as the first women executive editor from 2011 to when she was fired in 2014, and whose leadership largely straddled the upheaval in journalism from print to digital news. But over the last few weeks, several journalists have raised serious concerns about the facts of "Merchants of Truth" and alleged plagiarism.

Abramson's recent admission in an interview with The Cut that she does not record her interviews, and has never done so, drew wide criticism from others in the media. It has also given her little shielding from allegations of incomplete fact-checking. "I’m a very fast note-taker," Abramson told The Cut. "When someone kind of says the 'it' thing that I have really wanted, I don’t start scribbling right away. I have an almost photographic memory and so I wait a beat or two while they’re onto something else, and then I write down the previous thing they said. Because you don’t want your subject to get nervous about what they just said."

In a Twitter thread, Arielle Duhaime-Ross, a correspondent for Vice News, claimed that in a single paragraph on her identity and qualifications in "Merchants of Truth," there were six factual errors. They added that they were interviewed by Abramson in 2017 for 40 minutes, in which the former Times editor only took handwritten notes and then they were not contacted for a fact-check before publishing.

The issues Duhaime-Ross raises in their thread seemingly ranges from omission and misrepresentation of their journalism background to wrongly identifying them as trans, as well as misreporting simple details like the color of their shoes and the cut of their hair. Duhaime-Ross said the only thing that was corrected in the final version was their gender.

"Taken together, the graf paints a picture of a 'hip' outsider, who was about to go study snakes but was plucked from obscurity & plopped in front of a camera w/ zero experience in journalism or covering the environment," they wrote on Twitter. "That doesn’t resemble my career trajectory in any way. . . I haven't read Merchants of Truth in full, but these inaccuracies make me skeptical of the entire book."

Another former Vice News reporter, Danny Gold, wrote a Twitter thread about the inaccuracies in "Merchants of Truth" regarding his reporting work covering the Ebola outbreak in West Africa. In the book, Abramson claimed that the correspondent did not wear protective clothing, according to screenshots of the passage, whereas New York Times reporters "followed the same protocol as doctors," essentially covering their entire bodies.

Gold expressed dismay at Abramson's mis-categorization, saying he spoke to her directly. Also, "We did all this on camera," Gold tweeted. "It’s in the piece. Jill either didn’t watch the piece or didn’t speak in depth to anyone who covered Ebola. I’m probably Streisanding this but i absolutely hate lazy journalism and i take my safety and that of my team very seriously."

But the major blow against Abramson came on Thursday when current Vice News correspondent Michael Moynihan wrote a long Twitter thread alleging that several passages in the three chapters on Vice were outright plagiarized from several different sources, including a Master's thesis.

Moynihan wrote that the chapters on Vice "were clotted with mistakes. Lots of them. The truth promised in Merchants of Truth was often not true. While trying to corroborate certain claims, I noticed that it also contained...plagiarized passages."

"There’s plenty more--enormous factual errors, other cribbed passages, single or unsourced claims--but this should give a sense," Moynihan added, following many screenshots of alleged plagiarized sections. "The book ends with a final wag of the finger, reminding me that my colleagues apparently don’t possess 'the expertise to compete on the biggest news stories.' If Abramson is the arbiter of ethics & expertise, I think we’re doing just fine."

During an appearance on Fox News, Abramson rejected the allegations of plagiarism. "All I can tell you is I certainly didn’t plagiarize in my book," she said. She added that she hadn't yet read through the allegations, as they had just been tweeted an hour before. But Abramson said her book contains almost 70 pages of footnotes.

When Martha MacCullom asked Abramson if it was a "footnote issue," Abramson said, "No. I don’t think it’s an issue at all."

But later on Twitter, Abramson sent out a series of tweets, first accusing Vice News of "unhappiness" with her portrayal of the organization, but ultimately promised to "review the passages in question."

Simon & Schuster, the publisher behind "Merchants of Truth," released a statement regarding the allegations of plagiarism, calling the book "an important, exhaustively researched and meticulously sourced book about the media business. . . It has been published with an extraordinary degree of transparency towards its subjects," adding that all four news organizations were "given ample time and opportunity to comment on the content."

"If upon further examination changes or attributions are deemed necessary we stand ready to work with the author in making those revisions," the statement concluded.

The ethical issues raised concerning Abramson's sections on Vice and BuzzFeed specifically are also significant given her larger views on the outlets' integrity and quality. As Josephine Livingstone wrote in The New Republic, "The chapters on BuzzFeed and Vice mar what is otherwise an incisive autopsy of print journalism" and the chapters also "read like Abramson is speaking from a place of ill-informed bitterness over print’s loss of supremacy."

This can be seen in snide remarks about the correspondents at Vice, for example, which insinuated that their physical appearances and identities dwarfed experience and journalism chops. "Most of the on-air talent was very young and had scant experience; only three had ever reported on camera before," Abramson wrote. "What they had was 'the look.' They were diverse: just about every race and ethnicity and straight, gay, queer, and transgender. They were impossibly hip, with interesting hair."

In another passage, she doesn't seem to grasp the evolving political awareness and interests of young people, characterizing BuzzFeed's LGBT and gender coverage reductively as "reliable traffic drivers."

All in all, Livingstone wrote, "It’s abundantly clear what type of journalist she understands and cares about insulting, and which she does not."

It's a shame that at best, "Merchants of Truth" is complicated by generational scapegoating and at worst could be delegitimized by fact-checking errors and plagiarism, because the topic Abramson sought to undertake is both critical and timely. With rampant layoffs hitting the media industry at every level, many potential readers, both in and outside the field, want more context for journalism's crippling infrastructure.

Thus, Abramson's condescending tone towards Vice and BuzzFeed journalists — many of whom are young, diverse and intimately in touch with and vulnerable to the fast-paced and ever-changing digital landscape — feels like a punching down. It's also unproductive. During a time when many media companies live or die by digital advertising, Facebook played a central role in many organizations' "pivots to video," the unchecked spread of fake news, and, along with Google, the sucking up of all the ad money. In short, there's no shortage of people and companies to point the finger at for the challenges journalism faces now.

Further, with President Trump's blatant attacks on media companies as well as against individual journalists, compounded by violence — actual and threatened — directed at news outlets and journalists both in the U.S. and abroad, "the fight for facts" has never been a more volatile and alarming endeavor. Whether the allegations of plagiarism turn out to be merited or not, she already seems to have lost the "fight for facts."