Republicans are reveling in the Virginia mess: But they're not just hypocrites, they're nihilists 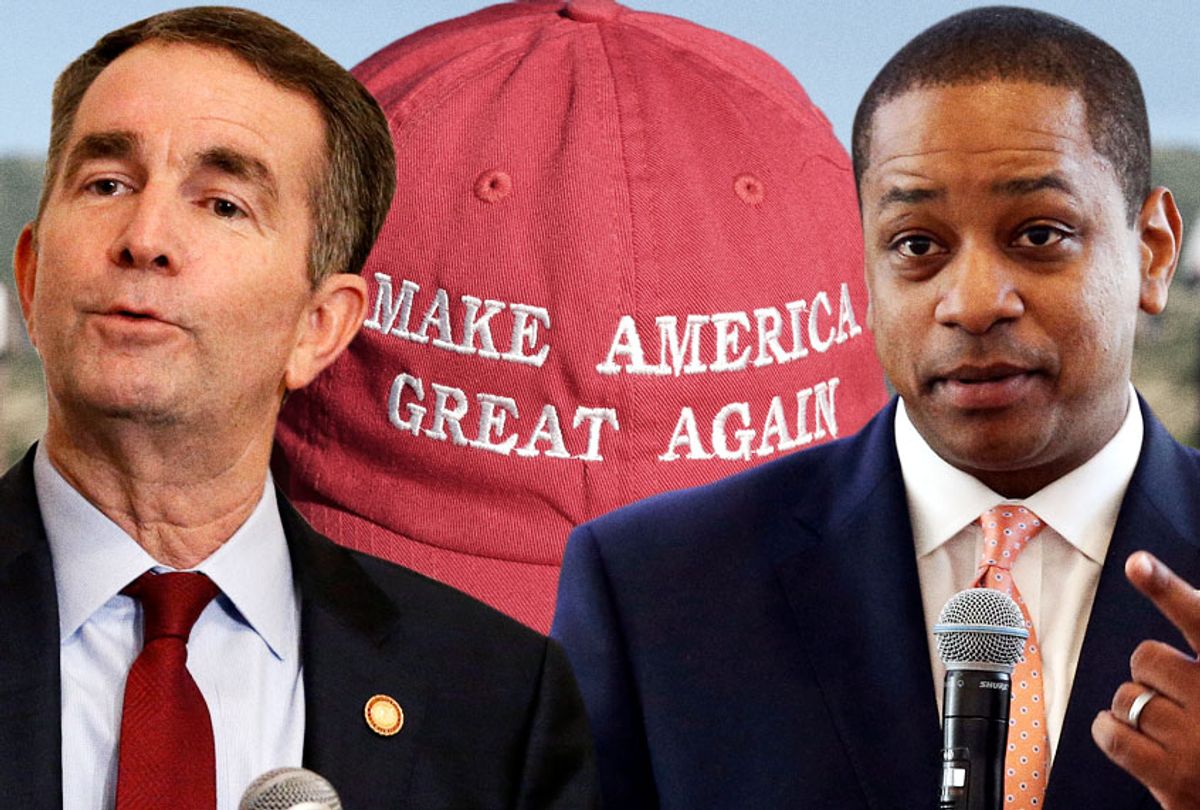 Virginia Democrats are in turmoil these days, as Gov. Ralph Northam and the two Democrats behind him in the line of succession have all been caught up in possible career-ending scandals involving racist costumes and alleged sexual assault. Republicans, unsurprisingly, are striking poses of outrage and demanding the immediate resignation of all three officials. Democrats, meanwhile, are charging Republicans with hypocrisy, because the GOP continues to support its own politicians who are racist or sexually abusive -- such as President Trump, who has a long track record of racism and was recorded bragging about sexual assault.

Hypocrisy is a favorite charge in American politics — arguably because it's the only one that seems to consistently stick — but this series of scandals shows that Republicans are something worse than hypocrites. They are political nihilists, who use scandals like this to further their agenda of emptying politics of any morality, hope or substance, clearing the path for a naked power grab.

First, the facts: Last week, a trolly right-wing website published a photo, taken from Northam's personal page in his 1984 medical school yearbook, that shows one man in blackface and another in a KKK-style hood. At first, Northam admitted to being in the photo and apologized. Then backtracked, claiming that neither of the people in the picture was actually him, while also admitting to have done blackface at another point to impersonate Michael Jackson.

Then allegations were published -- by the same website -- that Lt. Gov. Justin Fairfax, who would replace Northam if he resigned, had been accused of sexual assault. Shortly after that, Fairfax's accuser, a California academic and a Democrat who seems to have no relationship to Fairfax outside of this one encounter, released a public statement that is both credible and disturbing.

Third in line is Virginia Attorney General Mark Herring, who then stepped forward and admitted to doing blackface in college. This time, the story isn't being driven by right-wing blogs, but it seems likely that Herring decided it was wise to get ahead of the story before any photos came out.

Without a doubt, these scandals are the result of a coordinated political attack by right-wing forces who are mobilizing to prevent Democrats from passing legislation supporting women's equality. So even as many Democrats agree there should be serious political consequences for these three men, they are also calling Republicans hypocrites for their outraged denunciations.

They have a point. After all, the same conservatives who are professing outrage over stories of racist behavior and sexual misconduct supported Republicans Ed Gillespie and Corey Stewart in their statewide campaigns -- for governor and U.S. senator, respectively -- even though both made overt appeals to racism and Stewart has ties to fringe white nationalist groups. These same conservatives largely support Trump, of course, and were quick to defend Supreme Court Justice Brett Kavanaugh from allegations that were strikingly similar to the ones now raised against Fairfax.

But I'd argue that what Republicans are up to here is more sinister than garden variety hypocrisy. Their larger purpose is to push the idea that no one actually cares about racism or sexism, and that all protestations to the contrary are just postures that liberals adopt for political gain. Their strategy is to seed the notion that everyone is a bigot motivated by greed and naked self-interest, so they can then turn around and hold Republicans out as slightly better because hey, at least they're honest about it.

That's what all the discourse about "political correctness" is ultimately about. Intrinsic to these complaints about is the idea that people who seek to enforce social norms against racist or sexist slurs are not motivated by sincere moral conviction but by a will to power. That's why the related term "virtue signaling" has taken off in right wing  circles. That refers to the idea that no one actually believes in their professed egalitarian values, but only say they do in order to gain status and power.

This was the premise of Donald Trump's entire campaign and now his presidency: He was smashing through the strictures of "political correctness" and freeing people to admit their true racist and sexist nature. This premise requires painting his opponents as disingenuous. Otherwise, the "politically incorrect" would have to admit that they're just bigoted bullies, rather than righteous freedom fighters struggling against hypocritical moral scolds.

The idea that everyone is a bigot but only conservatives are man enough to admit it was essentially the argument Trump made in his State of the Union address to defend building a border wall.

"Wealthy politicians and donors push for open borders while living their lives behind walls and gates and guards," Trump said. The implication was clear: Liberals are a pack of hypocrites who say they want  racial diversity but actually wall themselves up in enclaves of privilege. So conservatives should build a border wall as a way of sticking it to those phonies.

So Republicans don't much care if they come off like hypocrites when they express outrage at Democrats who do racist or sexist things, while defending and indulging people on their own team who are often far worse. It's because they aren't really hypocrites. They are people who believe outrage at bigotry is never sincere, but only performed for political gain. So they perform it for political gain whenever that's convenient, and never lose a moment's sleep.

Republican nihilism, on its surface, seems to be working for them. Sen. Al Franken, the Minnesota Democrat, was forced to resign after eight women accused him of sexual harassment, but Kavanaugh is now on the Supreme Court despite credible allegations that were more serious. Trump was elected president even after being revealed as bragging about transgressions that would likely qualify as criminal assault. Ralph Northam is under immense pressure to resign, understandably and justifiably. But any number of Republicans, including the president, continue to skate while invoking white nationalist ideas. It's maddening.

That's why some on the left are inclined to wonder if it's time for Democrats to do what Republicans do: White-knuckle your way through a scandal, hoping that eventually everyone will move on and you can keep your seat and the power. There are quite a few embittered fans of Al Franken fans who believed he could used "due process" to drag out the scandal until it went away.

This approach has it all backward. That might save individual politicians from doom — Northam is clearly making that bet by refusing to resign and pretending to investigate — but in the long run, that dig-in-the-heels strategy only bolsters the nihilistic Republican narrative that no one actually cares about bigotry and only pretends to when it's politically advantageous.

But by taking a moral stand and cleaning their own house, Democrats can show voters that they actually do care. They take sexual assault and racist conduct seriously and will consistently denounce such things, even when their own elected leaders have committed the offenses and must face the consequences. This isn't just the right thing to do. It's also the winning strategy in the long run.

The Franken scandal shows why. If the Minnesota senator had toughed it out through the sexual harassment scandal, he would have been sitting on the Senate Judiciary Committee while Brett Kavanaugh was forced to respond to sexual assault allegations. Franken's presence would have completely undermined the moral authority Democrats brought to the proceedings. But he was gone, and Democrats could send a strong, unmistakable signal to the nation, and to women in particular: They take sexual assault seriously and will fight for women's right not to be victimized.

Sure, Kavanaugh was confirmed anyway. But taking the high road paid off for Democrats almost immediately with a sweeping victory in the 2018 midterm elections. That win was due to women voters, who not only showed up in larger numbers than men but overwhelmingly voted for Democrats while men split almost evenly between the two parties. It's doubtful that would have happened if women felt that both parties put protecting their own politicians over women's health and safety.

Republicans want the public to believe that doing the right thing is a losing proposition. When people lose hope and moral clarity,  they stop participating in politics, which benefits Republicans. The only effective way to fight back is for Democrats to live their values as fully as possible. There may be short-term losses, such as the current ugly situation the party faces in Virginia. But the long-term gains are worth it.