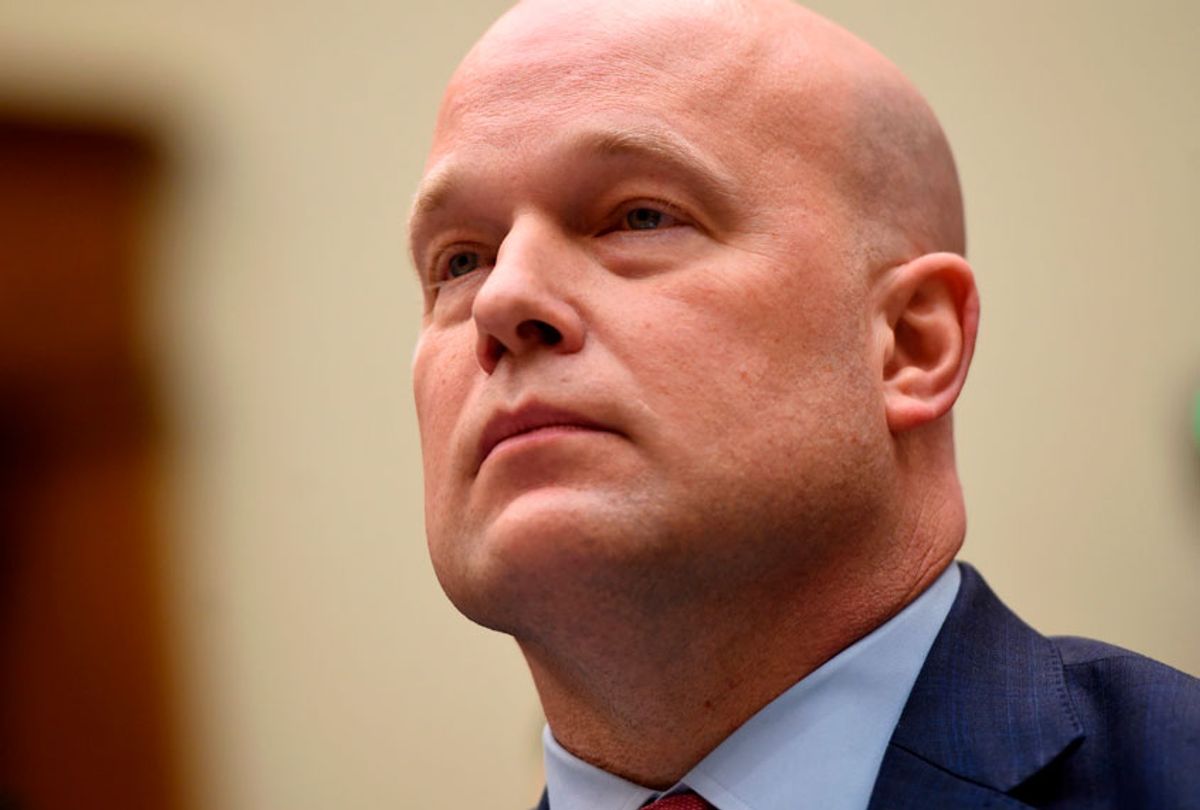 Acting Attorney General Matt Whitaker arrives to testify before a House Judiciary Committee hearing on oversight of the Justice Department, at Capitol Hill in Washington, DC, on February 8, 2019. (Getty/Saul Loeb)
--

Apparently President Trump woke up on the wrong side of the bed on Thursday morning and accidentally turned on MSNBC or CNN instead of Fox News. That was a mistake. Those two cable networks were covering the latest news about the House Intelligence Committee's probe into the Russia scandal and it ruined his whole morning:

Trump was 28 years old during the Watergate hearings. He was in his 30s when the Iran-Contra investigation began, an investigation that continued for 2,978 days. Seven years of Whitewater and the myriad Clinton investigations began Trump when was 46, and the 9/11 hearings into the Iraq War intelligence failures happened in his late 50s. He was in his 60s throughout the interminable Benghazi hearings during the Obama administration. In other words, there have been congressional investigations into presidential administrations for his entire adult life. We know he watches the news so he must have heard of them. They all got big ratings.

Some of those probes were about personal behavior and alleged pre-presidential financial corruption. Others concerned major intelligence matters and policy failures. And in one case, it was about gross abuse of presidential power. But Trump's petulant lamentations are accurate in one sense. No previous president has ever been suspected of all of that. And none were ever investigated for conspiring with a foreign government to sabotage his opponent's campaign for money. He's the first!

It's interesting to see him wail about it at this late date. Perhaps he wasn't paying attention when people pointed out to him that the loss of the House majority last November would inevitably lead to this. Or maybe he's whining for the benefit of his audience, priming them to believe that a primal scream of "Presidential Harassment!" is the new "Witch Hunt!"

But he'd better get used to it. Friday's testimony by Acting Attorney General Matt Whitaker (presumably occurring as you read this) is the first day of the rest of his presidency. It's only going to get worse for him.

The House Judiciary Committee has a right to call the attorney general up to the Hill and ask him questions. It's perfectly normal. But Matt Whitaker isn't a normal attorney general, not even a temporary one. The circumstances of his hiring at the Justice Department as former Attorney General Jeff Sessions' chief of staff, and then his ascension to a position for which he is totally unqualified have never been fully aired in congressional hearings.

The fact that Whitaker auditioned for a job in the administration as a pro-Trump pundit on Fox News and CNN is hardly unprecedented. Trump has hired many people that way. But it is certainly unusual for someone who was on record vociferously defending a president from a criminal inquiry to be hired to oversee that inquiry. It's even more unusual that Whitaker refused to recuse himself. All of that is of interest to the committee, and the public has a right to hear Trump's guy explain himself.

There are other issues committee members would certainly like to hear about from the Department of Justice. They'd like to be briefed on the legality of the child separation program, the current state of voting rights and the government's position on defending the Affordable Care Act, among other things. They may ask Whitaker about those issues but it's unlikely they really care what he says. He's on his way out the door any day now, and his influence on DOJ policy has almost certainly been nil in any case.

What they want to know from Whitaker during his last days in office is whether there has been any interference by the White House into the special counsel's office or the Trump-related cases now before the U.S. attorney for the Southern District of New York by the White House. It's been pretty obvious that the administration doesn't trust Whitaker to handle those kinds of questions very deftly. His performance during a recent sweaty appearance in the White House briefing room, when he nervously answered a question inappropriately about the Mueller probe coming to an end certainly wouldn't have set Team Trump's collective mind at ease. So there has been a tug of war between the Judiciary Committee and the Department of Justice over Whitaker's testimony, and for good reason.

Whitaker had initially dodged the appearance by evoking the shutdown, clearly hoping to be out of office before the day of reckoning. But they finally settled on today's date and the committee even sent over some questions  in advance so Whitaker could anticipate whether to ask the president to invoke executive privilege. The committee asked to be notified 48 hours before the hearing if he planned to do so, telling Whitaker he would otherwise be expected to answer. They did this because Trump's minions -- including Sessions, his former attorney general -- adopted a novel claim that they wouldn't answer questions because the president might want to declare certain information privileged in the future. That's not how this works.

Naturally, Whitaker ignored the deadline which is what prompted the committee to vote to subpoena him if he blew them off altogether, which certainly seemed possible. This administration does not appear burdened by respect for decorum or the constitutional requirements of congressional oversight. The subpoena threat was a signal that the Judiciary Committee isn't playing.

As for the questions themselves, they are pretty simple and shouldn't be difficult to answer. Among other things, the committee wants to know whether Whitaker has briefed the president on the Mueller investigation and whether Trump has attempted to interfere with the Southern District investigations, as has been reported. They also want to know if the Utah U.S. attorney's supposed "review" of all the Hillary Clinton has been communicated to the White House, and whether Whitaker has spoken with the White House about the disputed BuzzFeed article alleging that Trump directed his former lawyer Michael Cohen to lie to Congress.

These are important questions that only Matt Whitaker can answer.  But it's fair to guess that incoming Attorney General William Barr will also be up on the Hill in a couple of months and will be asked similar questions by this committee. Trump still thinks the attorney general ought to be his personal fixer and he'll almost certainly put Barr into the same bind he's put Whitaker. Barr is much more sophisticated and experienced, but when the boss wants you to be his Roy Cohn you have a choice to make. Assuming Whitaker actually shows, we'll see which way he went.