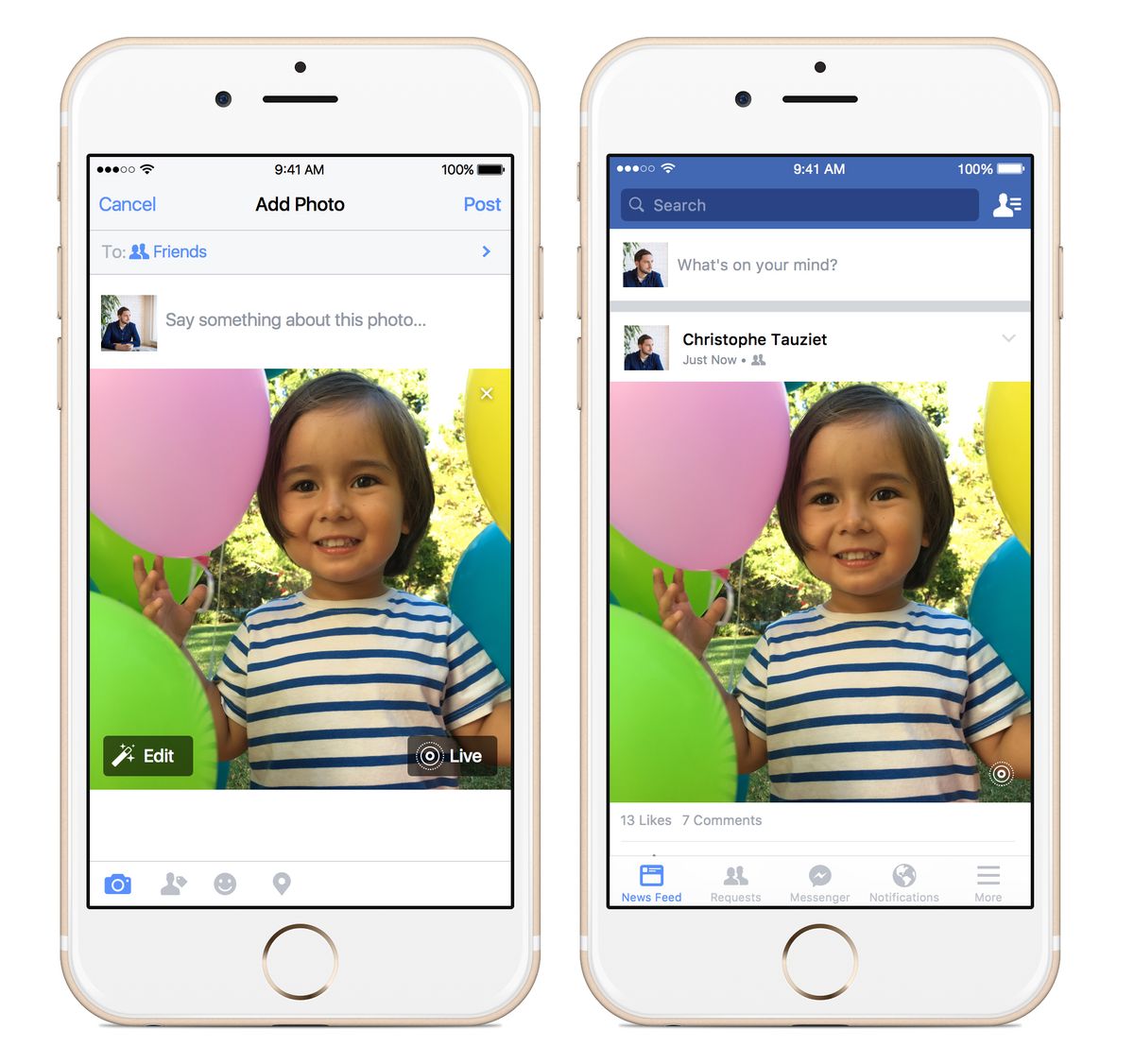 FILE - This file photo provided by Apple and Facebook demonstrates the posting of an animated photo using Facebooks new app, left, and the viewing of it, right, on an iPhone. The latest iPhones come with the ability to turn still images into video, known as Live Photos. (Courtesy of Apple and Facebook via AP, File) (AP)
--

Recent days have seen the simmering tension between Apple and Facebook reach an unprecedented level, after months of back-and-forth sniping, veiled potshots and a cold war between the two tech titans that suddenly became quasi-hot. The CEOs of both companies have taken shots at the other via public remarks before, but this week saw something remarkable — Apple blocked Facebook’s ability to work on beta versions of Facebook iOS apps internally as punishment for the creepy app you may have heard about that Facebook installed on some people’s phones to monitor everything they do. Apple has since restored Facebook’s enterprise developer certificates, which returns things to the status quo, but it does raise a question.

If this was a warning shot of sorts from the iPhone maker, what would happen if its pro-privacy CEO ever decides  . . . that’s it. A line has been crossed, and Facebook definitely needs to be banned from the App Store now. What then?

It’s not that far-fetched of a reality, and we actually have a good idea of what might happen next if Apple ever decides to go down that road. First and foremost, “Apple couldn’t simply ban all of Facebook with a button click,” The Verge notes in a new piece on the brouhaha. “It would have to ban every developer account that spans Facebook’s app portfolio, which means banning the accounts for Instagram, WhatsApp, and Facebook itself, among those for other, smaller apps. That would be an unusual move, too, since Apple typically blocks developers on a per-app basis, rather than as a full account, iOS developer Phill Farrugia tells The Verge.”

Another thing important to remember right off the bat — yes, it would sting, but Facebook would keep trucking along. Android phones, of course, wouldn’t be affected by Apple’s action. Yes, the OS is more popular internationally, but it’s worth bringing up because it’s also easy to forget that of Facebook’s 2.3 billion users, the US is less than one-tenth of that total.

Among specific steps Facebook could take in the wake of an App Store ban, iOS developer Kiran Panesar tells The Verge the social network could encourage iOS users to switch to the mobile web version of the app. However, it wouldn’t be as fast or as smooth a user experience. The push notifications would also work different. And Facebook would have to rethink some things entirely, given the fact that with Instagram’s mobile web experience, for example, you can’t upload new posts through it.

Read more BGR: Follow along as this video maps out everywhere Elon Musk flew his private jet in 2018

Facebook itself discloses to its investors that there’s always a small chance of something like this happening. Public companies are required to spell out risk factors in various documentation for investors, and in a recent SEC filing, Facebook noted that any changes “in our relationships with mobile operating system partners . . . could adversely affect the usage of Facebook.” All of which is to say — Facebook has most definitely thought about this happening.

We should reiterate that this is nowhere near a likely scenario, but it’s still interesting to think about what could happen if things ever get to that point. Per The Verge: “Instagram, Messenger, WhatsApp, and other Facebook properties have been among the top free App Store apps for years. Analysts estimate that they’re also among the most used apps on peoples’ phones, too. Apple would have to be okay with not only angering Facebook, but also disrupting its users’ lives. Without popular apps, the iPhone doesn’t do nearly as much . . . Apple may not like Facebook, but it’s reliant on the rival tech giant, too.”

Read more BGR: Report: Facebook has been paying some teens for permission to track everything they do