I was groped by a man called “Mary”: The world changes but not the Catholic Church 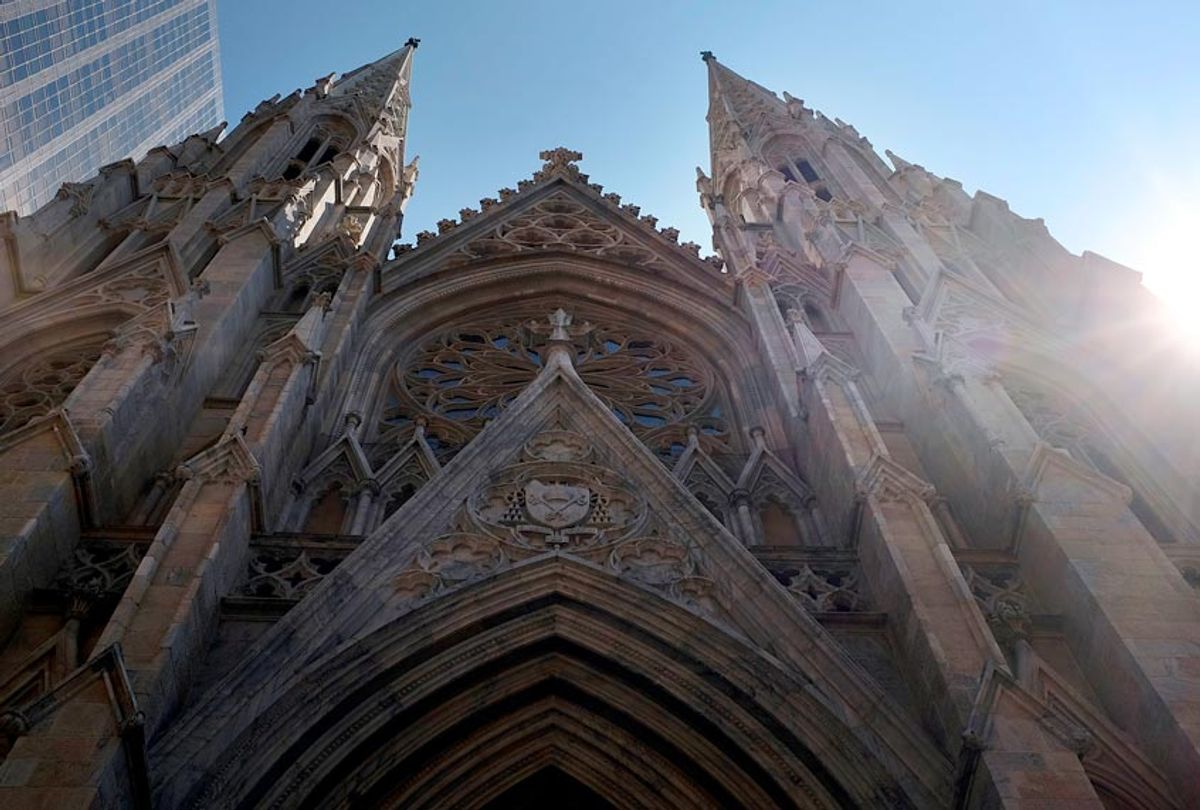 “Mary’s” real name was Francis Cardinal Spellman. The year was 1967, and he was Archbishop of the diocese of New York. An intimate of popes going back to Pope Pius XII, whom he had befriended when he was Archbishop Eugenio Pacelli in the 1920’s and serving as Papal Nuncio in the Vatican, Spellman was the most powerful Catholic figure in the United States, and one of the most powerful in the world.

The groping took place in his private quarters behind St. Patrick’s Cathedral in Manhattan in the presence of two West Point cadets and one Monsignor who was introduced to us as the Cardinal’s “personal assistant.”

I was a junior at West Point, and one of the editors of the cadet magazine, The Pointer. Cadets were allowed only two weekend leaves each semester in those days, and what they called a “weekend leave” consisted of being allowed to leave the campus on the Hudson from noon on Saturday until 6 p.m. on Sunday, so it wasn’t a “weekend” at all.

One of the things cadets did to compensate for this lack of free time away from the Academy was to participate in what was called “club activity,” because cadet clubs were permitted to take trips away from the academy to pursue “activities” related to their purpose. The Pointer was considered such a club. So was the “Culture Club,” formed by a couple of classmates in my company for the purpose of availing ourselves of the culture in nearby New York City. The Culture Club would take trips to New York to attend the ballet and opera on Friday and Saturday nights. The rest of the time in the city was our own, which we spent pursuing members of the opposite sex, whose members in those days were nowhere to be seen among the all-male corps of cadets.

Cadets working on the staff of The Pointer could take what were called “trip sections” to sell ads, or in my case to interview people for articles for the magazine. A few of us were looking for an excuse to go down to the city, so I racked my brain thinking of who I could interview for a Pointer article. Suddenly it came to me. Cardinal Spellman! He was scheduled to receive the high honor of the Thayer Award from West Point later that year, so there was a good reason to write a piece about him. The trick was getting him to agree to an interview.

I sent Spellman a letter asking for an interview for The Pointer, knowing that he would recognize my name, and sure enough, his assistant got right back to me, and we set up a date in April. We traveled to the city in our Dress Gray uniforms and showed up at the cardinal’s private residence in the late afternoon on a Friday. With me was a classmate who was one of The Pointer’s photographers, and a second guy who was scheduled to make sales calls later that day and the next to sell ads for the magazine.

We were led into a sitting room with windows overlooking Madison Avenue. Spellman, a diminutive, fleshy square-faced man wearing wire-rimmed spectacles was seated in a corner of the room. His assistant the monsignor showed me to a chair next to him. I took my seat and got out my pen and notebook and started the interview, but before I could even ask my first question, Spellman put his hand on my thigh and started moving it toward my crotch. He was just about to reach my private parts when the monsignor, who was standing behind him, reached over his shoulder and grabbed his wrist and put his hand back in his lap. “Now, now, eminence,” the monsignor whispered to Spellman.

I had no idea what to do. I was afraid I would be punished or even accused of lying if I reported Spellman to the authorities at West Point. I mean, he was Cardinal Spellman! He was the military vicar of the United States! I was panicked that if I stood up and left, I wouldn’t get the interview I needed for my story. I had sold the story and the New York trip to the officer in charge of The Pointer on the basis of writing a profile of Spellman in advance of the Thayer Award ceremony. I was dumbstruck. I just sat there, frozen.

Suddenly the cardinal opened the drawer in the side table next to him and took out a gold-plated tie clasp emblazoned with some sort of Catholic symbol and handed it to me. Dumbfounded, I put the tie clasp in my pocket, took pen in hand, and resumed the interview. I got off a couple of questions and was scribbling down his answer when I felt his hand sliding up my leg again. Same thing. The monsignor grabbed his wrist and put his hand back in his lap with a whispered “come now, your eminence.” Cardinal Spellman opened the drawer again, and this time he handed me a gold-plated key chain depicting St. Patrick’s Cathedral.

He did it over and over again, and I just kept asking questions and recording his answers like nothing happened. I left the cardinal’s residence that day carrying a couple of tie clasps, three key chains, and a couple of gold-plated tie tacks.

There was an out-of-body aspect to the whole thing. It was like it was happening to someone else. There I was in this rather large room behind St. Patrick’s Cathedral with two of my West Point buddies and this six-foot tall 30ish monsignor looking on, and each time Spellman groped me, I thought, surely, this is the last time it will happen. I mean, there were three other people present! He’s going to come to his senses!

But he didn’t. He wasn’t a doddering old senile fool, either. He answered my questions lucidly and even embellished his answers with long, digressive stories. At one point, he recalled the first day of the Anzio invasion and went on about what a dashing figure my grandfather cut in his leather jacket and cavalry riding breeches and white neck scarf, the colorful uniform he was famous for wearing during the war. The monsignor didn’t say a word about the cardinal’s behavior when he escorted us out of the cardinal’s residence. No apology, no shrug of the shoulders, nothing.

Later, the three of us checked into the Statler Hilton and sat around and drank beer and laughed about it. The photographer made several pictures showing Spellman groping me. We couldn’t wait to get them developed and have another yuk.

I have to say that I decided to tell this story with some trepidation for that exact reason: because our reaction to Spellman’s groping was to treat it like a joke. But while it may have seemed funny to us 52 years ago, what we’ve learned about sexual abuse by priests and bishops in the Catholic Church has proved that the casual groping by Cardinal Spellman that day was only a hint of what was going on and had been going on in the church certainly for decades, and perhaps for centuries.

Last Tuesday, Pope Francis deigned to acknowledge — in response to a question from a reporter on his official airplane, no less — that the church has long known priests and bishops have sexually abused and raped nuns, sometimes forcing them to have abortions when they got pregnant. This latest admission of yet another sexual scandal in the church came after revelations over 30 years of sexual scandals stretching back decades. They include the wide ranging and decades long scandal of pedophile priests abusing children, and the abuse by priests of adult seminarians and members of their parishes. All of it has been known to the leaders of the church for decades and covered up by a systematic process of moving offending priests around and intimidating victims into silence, or if necessary, paying them off.

When I moved to New York in 1970 and came into contact with the archdiocese of New York working on stories about the church’s real estate, I heard from several priests I befriended that they still talked about Spellman in the New York church, and that his nickname for decades had been “Mary.” That a man as powerful as Cardinal Spellman would be given the feminine sobriquet “Mary” within the church is all the evidence you need that his proclivities were well known by his fellow priests and bishops, and that incredibly, their reaction was to treat it like a joke.

Hell, the monsignor had been pre-stationed right there behind him to insure Spellman did not, shall we say, take things too far with one of the visiting cadets! They knew what he was likely to do. Spellman was at that time 77 and had been a priest for 51 years. There is little doubt in my mind that if he was capable of groping a West Point cadet in front of three witnesses in his residence at St. Patrick’s Cathedral, including a monsignor of his church, he had spent many of those years engaging in sexual abuse of other young men and perhaps children. “Mary,” indeed.

Sexual abuse within the Catholic Church is a joke no longer. Pope Francis has called a “summit” of bishops in Rome later this month to discuss for the umpteenth time the problem of sexual abuse by priests — this one is specifically focused on the abuse of children. He appears to be scrambling to hold together a church that is losing parishioners as fast as it is losing hundreds of millions, if not billions in settlements with tens of thousands of children and adults abused by priests.

I wish I hadn’t laughed off my experience of being groped by Francis Cardinal Spellman. It seems clear now that sexual abuse by priests and bishops and even cardinals — the so-called “princes of the church — was already systemic, and that the church was engaged in, and continued to engage in what amounted to a criminal enterprise by sanctioning sexual crimes and misdemeanors and not reporting offenders to law enforcement authorities. By staying silent about being groped by Cardinal Spellman, I feel like I contributed in some small measure to what came afterwards: five decades of sexual crimes by priests in the Catholic Church against innocent victims.

I wasn’t an innocent victim. I was an adult, a cadet at West Point, and I knew better. I’m sorry I didn’t stand up and report the man called “Mary” for what he did.