As many as 14,000 dockless electric scooters are on the streets of Austin, Texas 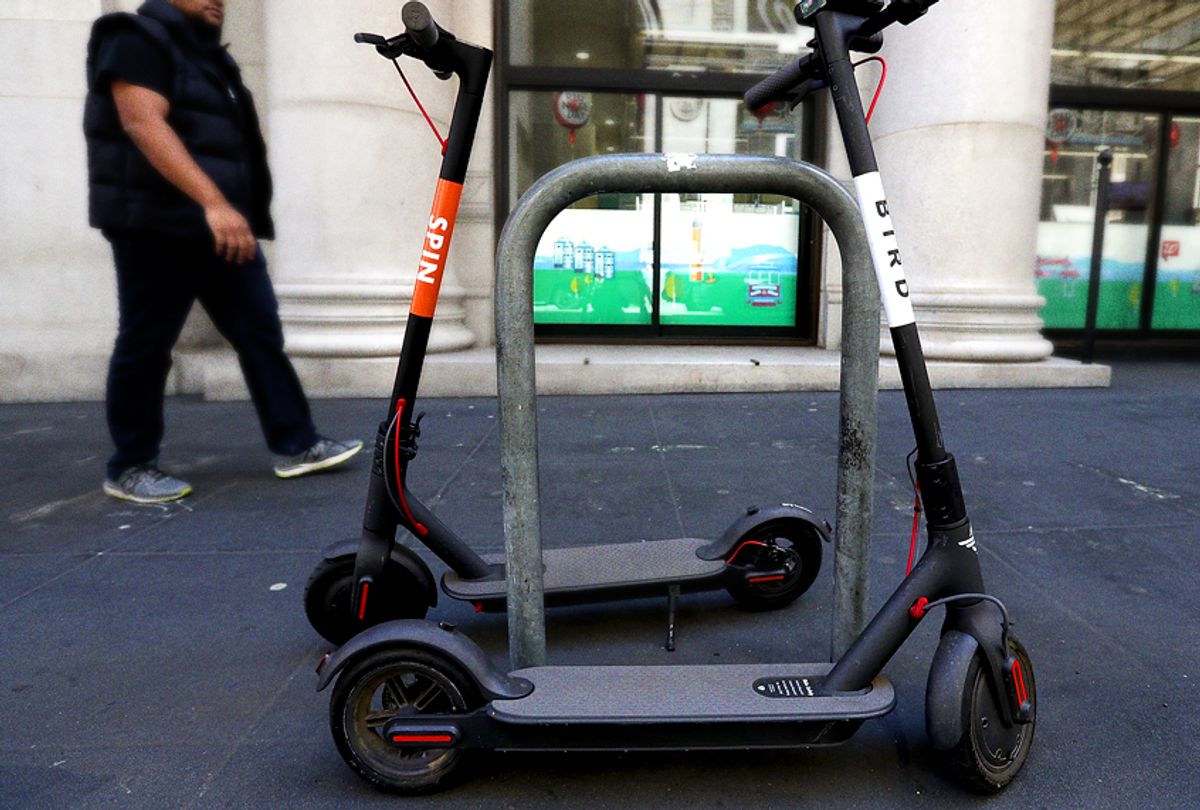 AUSTIN, Texas — University of Texas star baseball shortstop David Hamilton hit a pothole riding an electric scooter, tearing his Achilles tendon and requiring surgery. He’ll miss the season. Cristal Glangchai, the CEO for a nonprofit, hit a rock riding her scooter, landing her on the pavement just blocks from home.

“I lost control and ended up getting a concussion and a broken rib,” said Glangchai, a 41-year-old mother of four.

And Austin’s first scooter-related death occurred over the weekend. Police identified the scooter rider as Mark Sands, a 21-year-old UT student from Ireland, who died Saturday, just one day after suffering critical injuries when the electric scooter he was riding collided with a car.

As many as 14,000 dockless electric scooters are on the streets of Austin, whose 326 square miles are home to almost 1 million people. That likely makes Austin one of the cities with the highest scooter-to-citizen ratio in the nation — though the electric vehicles are also rapidly multiplying on the streets and sidewalks of Atlanta, San Diego, Nashville and Washington. At least 1,200 more are poised to appear in Austin whenever already-licensed operators deploy them. Ten companies have licenses to operate now.

Austin city leaders, worried about injuries for both users and pedestrians, asked the Centers for Disease Control and Prevention to investigate scooter-related crashes and injuries. The first-ever CDC scooter study will also look at how accidents could be prevented.

“I’m 72 and my wife is 70. It would be easy to knock us over,” he said. “My wife actually went online and found a little mirror to attach to her wrist to look behind her so she’s not constantly turning around. We go single file so she can see that mirror and see what’s behind us.”

These scooters are everywhere — speeding by or strewn on sidewalks — and are likely to overwhelm the city this spring as Austin readies for an onslaught of scooter-riding visitors during the annual SXSW Conference & Festivals, running March 8-17. Last year’s SXSW drew 432,500 people.

The scooter study was launched in December when three CDC epidemiologists spent two weeks in Austin reviewing incidents and scooter-related injuries during a 60-day period from September to November. They began contacting the 258 individuals identified through EMS calls or who visited emergency rooms with a scooter-related injury. Findings from this study will likely be released in March and could have far-reaching effects as cities across the country grapple with reports of injuries from these e-scooters.

“We don’t know if there’s something unique about Austin or the population there that may be different from other parts of the United States or globally,” said Eric Pevzner, chief of the Atlanta-based CDC Epidemic Intelligence Service, which is conducting the probe. “The rate of scooter injuries in Austin may be consistent with what’s being noticed in other places, or it may be much higher.”

These zippy, colorful motorized scooters, which are rented with a smartphone app and dropped off almost anywhere, are hard to resist. The companies behind them — Bird, Bolt, Lime, Scoot, Skip and Spin, among others — promote them as smart, low-cost transportation alternatives for short distances, especially in cities. Neither Bird nor Lime responded to multiple interview requests.

Data on scooter-related injuries are collected by the Consumer Product Safety Commission’s National Electronic Injury Surveillance System (NEISS), but the category also includes skateboards and hoverboards, which account for the bulk of the injuries in the most recent data from 2017 — well before scooters proliferated across the country.

The Austin study will help develop a baseline for comparison. So far, what’s believed to be the first published study examining scooter injuries was released last month in JAMA Network Open, a peer-reviewed medical journal. UCLA researchers studied 249 patients (228 scooter riders and 21 pedestrians) treated at two emergency departments over a year’s time. Head injuries and fractures were the most common diagnosis. Among scooter riders, 80 percent were injured in a fall, 11 percent collided with an object, and almost 9 percent were hit by a moving vehicle or object. For almost 5 percent of patients, intoxication was a factor. Just 4 percent of riders wore a helmet.

“Approximately one to two major traumatic brain injuries a month are admitted to the trauma center. The reason is simple. Who’s carrying a helmet? No one. No one is wearing them because no one is carrying them.”

Guillamondegui will appear this week on a panel dubbed a “community conversation about scooters in Nashville” as that city mulls more regulation.

In Atlanta, the number of injuries per month has increased from about 30 to about 100, said Dr. Hany Atallah, chief of emergency medicine at Grady Health System, which includes Grady Memorial Hospital, the largest hospital in Georgia. Grady, which is among the nation’s busiest Level 1 trauma centers, is looking at the rise and scope of scooter injuries as a new internal project.

“I’m concerned people are riding these things without helmets and on roads in busier traffic,” he said “As opposed to motorcycles, these wheels are pretty small. Certainly, hitting a pothole can send someone over.”

Cities are trying to balance the electric scooter as a boost to mobility with ensuring the safety of riders who travel amid motorists and pedestrians. There are plenty of reports of pedestrians tripping or falling over parked scooters, as well as tales of being hit by moving scooters. A handful of scooter-related deaths occurred last year: one each in Dallas, Washington, D.C., Chula Vista, Calif., and Cleveland. Some cities have introduced regulations that include banning the scooters, regulating the numbers allowed on the streets and specifying where they can park or ride. In Fort Lauderdale, Fla., the City Commission this week plans to evaluate its dockless mobility permit program and consider adjustments that could enhance safety, spokeswoman Dayana Diaz said.

Officials in Portland, Ore., decided in January to conduct a second scooter pilot program this spring studying the impact of e-scooters on the city. This one will last a year, following a July through November study that found 176 people went to emergency rooms with scooter injuries. Of those, 84 percent fell from a scooter and 90 percent of riders didn’t wear a helmet.

As electric scooters multiply around the country and the world, a survey of 7,000 people in 11 major U.S. cities by the San Francisco-based data platform Populus found that 70 percent of those surveyed had a positive view of scooters. Atlanta placed first, with 79 percent of its residents in the positive category. Austin was a close second, at 76 percent.

The CDC Austin study will calculate injuries per number of scooters ridden and per mile traveled. As researchers speak with those hurt, they’ll ask about road conditions, street types, weather, helmet use and behaviors, including alcohol use while riding.

While the study continues, Austin’s transportation department announced a “pause” in issuing new licenses to dockless mobility operators to assess the level of demand for those currently licensed and to ensure safety. The city is also reviewing its current rules and expects to revise the scooter rider ordinance this spring.

And, with the start of a new semester at UT-Austin, university officials announced new rules and fines for scooter use and indicated more changes are ahead, including dropping scooter speed limits on campus from 15 mph to 8 mph.

Glangchai, the injured CEO, said she’ll now “always wear a helmet and be a little more cautious” when she resumes riding following a six-week doctor-ordered hiatus.

“Scooters empower people. It seems so easy to hop on and press go,” she said. “It seems like it’s easier to take more risks on a scooter. They’re great because you get around places quickly, but it’s almost like it’s too easy for people to hop on and go fast.”