Open adoption reunion: My first time with our daughter's birth parents since the hospital

After a year and a half, this visit to the park was our first in-person meet-up since Grace was born 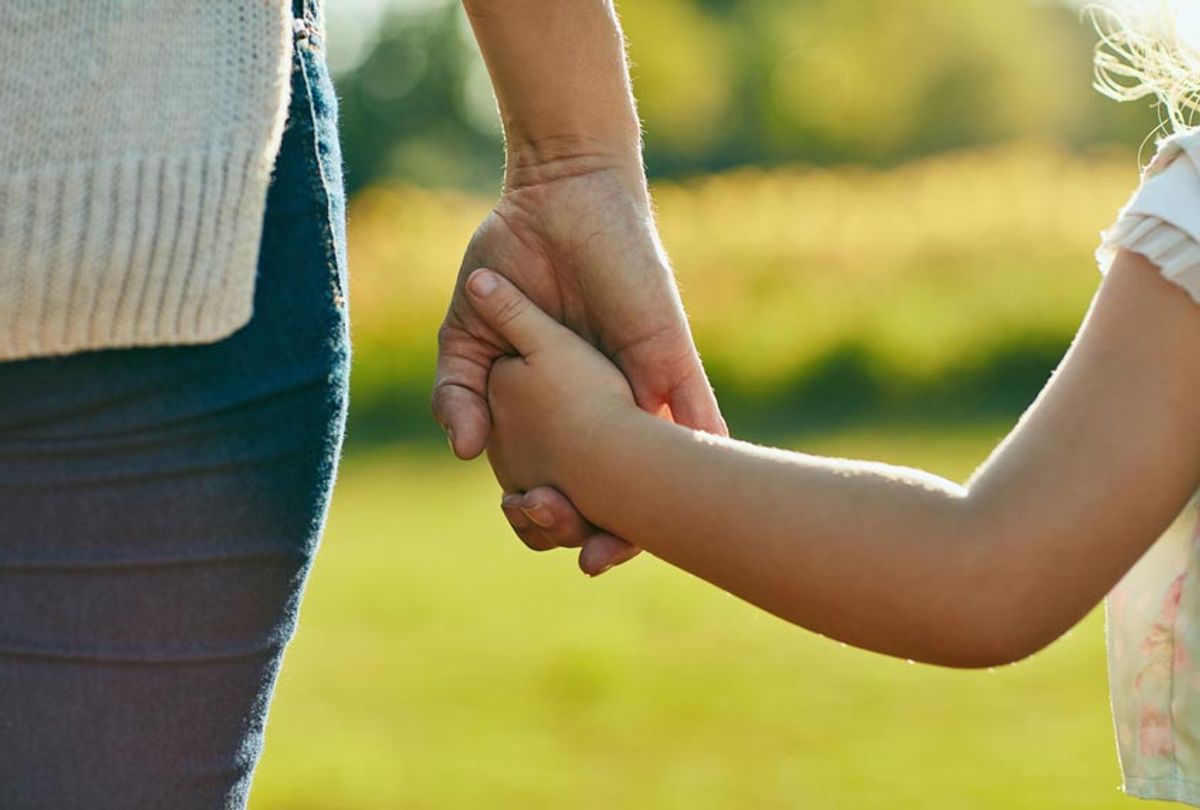 Excerpted from "Rock Needs River: A Memoir About a Very Open Adoption" by Vanessa McGrady (Little A, 2019). Reprinted with permission from Little A.

“Rock Needs River” is the story about becoming a mother through adoption, and then our relationship with my daughter’s birth parents after they became homeless in 2013 and stayed with us for a while. We all agreed on what’s known as an “open” adoption, in which there’s some level of transparency and contact. Since Grace’s birth in 2011, we have had years when we’ve been close, and years of no contact. In this scene, we’re seeing them in person for the first time after a year and a half of online interaction. I always wanted Grace to know Bridgett and Bill and to understand more about where she came from.

Grace, who had been walking only a few months and who had never met a set of steps she didn’t like, was testing her gravitational center, doing quite well, on some cobalt-blue metal playground stairs that would carry her up to a slide. We were at a park in downtown Los Angeles, a few blocks from where her birth parents, Bill and Bridgett, lived. The last time we’d seen them was when it was time to leave the hospital, two days after Grace’s birth.

We’d all piled into my then-husband’s Peter’s truck. Bridgett, Grace, and I were in the back seat, Bill in the front. Neither Bridgett nor I could stop looking at Grace, so sweet in her little blue-and-white hospital blanket, trying hard to stay awake. She kept falling asleep. It’s a lot of work to be born, for both people involved.

We took a slow, quiet ride home. Peter and Bill took the bags out. Bill grabbed the stroller the hospital gave them and later sold it on Craigslist for forty dollars. Bridgett slept for three or four days straight.

We connected on Facebook. I’d like their posts about their band and their music. I’d write them notes about Grace and send them holiday messages. I’d sent Bridgett a short kilt and manga-art T-shirt for performing—one of the reasons they’d placed the baby for adoption was to pursue their music careers. But after a year and a half, this visit to the park was the first actual in-real-life meet up since Grace was born.

We saw them all enter the park, and outwardly, not a thing had changed since the first time we’d met, except that Grace was no longer inside Bridgett. Bridgett and Bill were still all lanky limbs in blue jeans, long brown hair, matching black-and-neon-green Monster Energy drink T-shirts.

Bridgett, who had read on a Facebook post that I was looking for a new white cake recipe because I had failed miserably on my last attempt, handed me an angel-food cake recipe that she’d printed out from the Internet. It used Splenda instead of sugar. She’d carefully encased it in a clear plastic page protector and stuffed in some coupons for some of the ingredients.

I gave her a framed picture of Grace.

Reintroducing your kid to her birth parents isn’t a situation most parents face, to be sure. It wasn’t weird for Grace, of course, because all she really cared about was getting pushed on the swing and figuring out inventive new ways to go down the slide. But it was weird for all the adults—especially for Bridgett, who is shy to initiate conversations; Bill, who talked a lot about the big dreams of the past and future; and Peter, who seemed uncomfortable with the whole idea of another set of parents.

We discussed a book Bill wrote, called The Final Addendum, described, in part, as: “The approach to the creation event with mathematical correlations in Bible observations, based on its accurate connection with real historical events.” I imagined Bill’s brain, in gear like a Rube Goldberg machine, constantly flooded by a tidal wave of thoughts. Whenever I don’t know what to say, I usually let out a “huh,” a nonjudgmental signal for “tell me more.”

Bridgett told me her idea for a hot-plate/microwave cookbook geared for people who had limited cooking space and resources, such as those living in dorms, and I thought it was excellent. I offered to help her put it together if she typed it.

Conversations stopped short every time Grace discovered an escape route from the playground or took a spill. I was in prime secret-service mode, always scanning for the potential catastrophe while trying to let her experience the world on her own terms. My then-husband, Grace’s daddy, Peter, not a great one for ice breaking in the most normal of situations, wore a pained expression and kept the conversation mostly about music and his time as a rocker.

Bridgett and Bill seemed curious about Grace and amused by her, but kept their adoration at a distance. There was no smothering, no ebullient tickling, no obvious tears of, well, anything. I tried to give them as much space together as possible. At one point, Bill helped Grace up on one of those cars with a giant spring under it that made it sway and bounce. Out of nowhere, Grace gave Bill a kiss. It felt like a soul calling, a recognition. A punctuation mark.

We met up again for short visits. Once, in a park near our house, Bill, Bridgett, and I laid out a picnic while Grace perfected the art of climbing up a slide. Bridgett’s Blackberry buzzed—it was a rare call from her mother. They talked a little, and then she handed the phone to me to say hi. I was introduced as a friend—the family still hadn’t been let in on the pregnancy, let alone the adoption.

The voice on the end was warm and craggy, its melody ravaged by time and maybe cigarettes and who knows what other kinds of hard living.

“Tell me about when Bridgett was little,” I said.

“She was the cutest little girl you ever saw. She had these curly pigtails. I used to put them up with ribbons.”

There wasn’t much more to go on from there, but Bridgett’s mother pronounced that I was nice, and she promised to come to LA to visit. I said I’d love to meet her. And I meant that: I was starving to know more. I am intensely curious every day about Grace’s original kin, and I have always wanted to unearth the mystery that is Bridgett. The more DNA I understand, the better I will know my daughter. And the better I can help her to know herself.

Vanessa McGrady is the author of "Rock Needs River." She spends time thinking about feminist parenting, high-vibrational food, and badass ways to do things better. She often wonders why people aren’t more freaked out about plastic in the oceans. Whether in New York, the Pacific Northwest, or Glendale, California, she is grateful to call each place home. She’s lucky and profoundly grateful to be a mom to a magical sprite child named Grace. To learn more about Vanessa, visit www.vanessamcgrady.com.