A photo of a uniquely American racist act dominates the news, but my photo is an act of equality 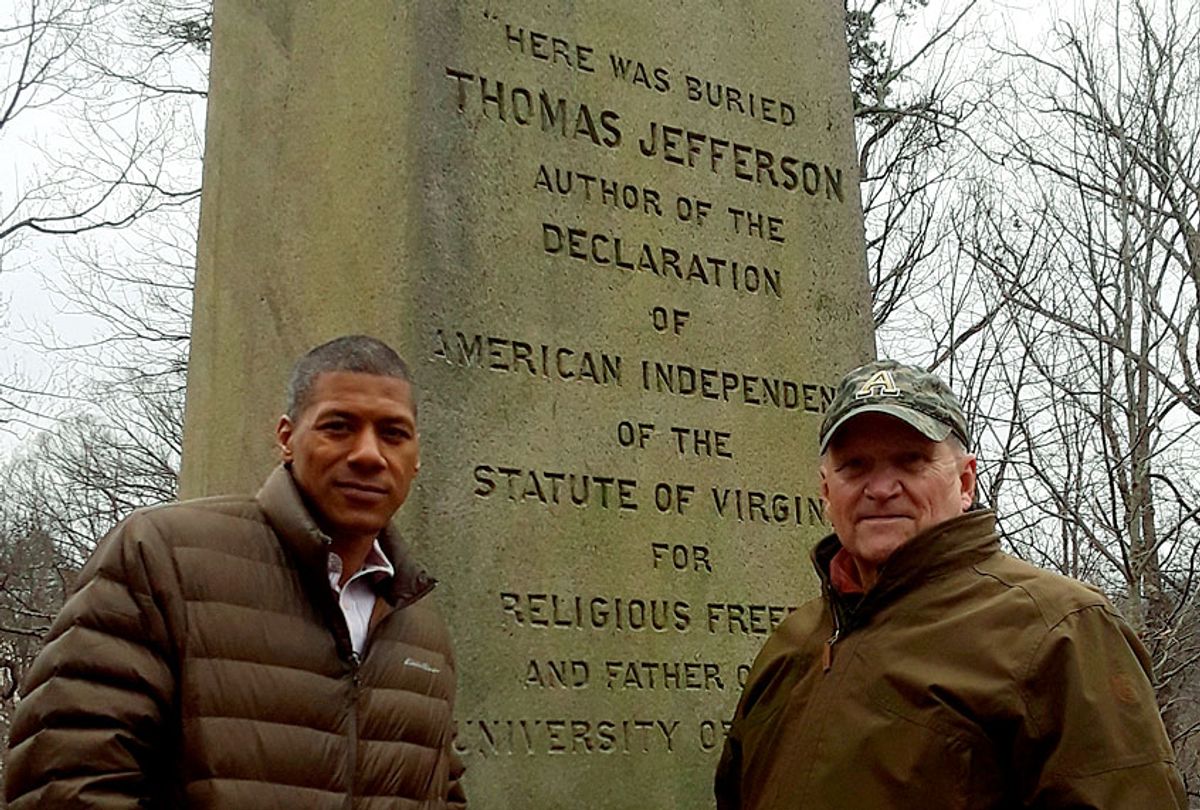 The author, right, and his cousin Shannon LaNier, who anchors CW39's "Morning Dose" in Houston.
--

The man on the left is Shannon Lanier. He is my cousin. We are standing on our great-grandfather’s grave at Monticello. The man buried beneath that obelisk fathered two children with his wife, Martha Wayles Jefferson, and six children with his slave, Sally Hemings. My fifth great grandmother is Martha Jefferson. Shannon’s fifth great grandmother is Sally Hemings. We talk all the time about the “founding fathers” of this nation, the men who signed the Declaration of Independence, who attended the Constitutional Convention. Well, this nation had founding mothers, as well. One of our founding mothers was a slave, Sally Hemings.

Just as the early citizens of the United States and the descendants of its founders helped to build this country, so did the enslaved humans they owned, and their children, and their descendants. If Thomas Jefferson had not owned more than 600 slaves during his lifetime, we would not have Monticello to visit today. Slaves built every inch of Monticello. They felled the trees and put them through a saw mill to make the lumber. They forged the nails to hammer that lumber into walls and floors and doors and windows. They made every brick with their hands — in fact, you can see the fingerprints of slave children in some of the bricks in the walls of Monticello today.

Slaves built the nation’s Capitol building. They built the White House. They built countless state and county buildings throughout the south, including state capitol buildings. The labor of slaves was used to build the roads and bridges that forged our way west into the unexplored territories of the Louisiana Purchase. Slaves harvested the cotton crops in the south that put shirts on the backs of early white Americans. They harvested the wheat that put bread in their bellies. Slaves tended the cows that produced milk for white children to drink. In many cases, slave women nursed the babies of their white owners. There is a photograph in the new exhibit of Sally Hemings’ slave quarters at Monticello that shows the black arms of a female slave holding a white baby.

Slaves got Thomas Jefferson up in the morning. They fixed his breakfast and laid out his clothes for him to get dressed. They arranged his pens and paper on his writing desk. In fact, if Thomas Jefferson had not owned slaves, he probably wouldn’t have had the time to write the Declaration of Independence, in which he famously declared that “all men are created equal.”

That’s our national tragedy, isn’t it? That so many years have gone by, and still Thomas Jefferson’s dream has not been realized. Before the photograph of my cousin and me was taken last weekend at Monticello, there were other photographs taken in the state of Virginia published all over the place, shown again and again on cable news. They were photographs of the governor of Virginia in blackface, or someone in blackface anyway, standing next to a man in a Ku Klux Klan white robe and peaked hat. Whoever was shown in the photos, they appeared on the personal page of the governor of Virginia’s medical school yearbook. Later, the attorney general of Virginia admitted that he, too, had put on blackface for Halloween costume when he was in college.

Today, I’m a writer of novels and movies and journalism, and Shannon is the host of a morning television show in Houston, Texas. You could say that we are among the lucky ones in this country, and you would certainly be correct that we are lucky as an accident of birth. But we had to fight to get to stand together on the grave of Thomas Jefferson. We had just finished an interview with CBS "This Morning." Finally the day came when we sat together in the new exhibit of Sally Hemings’ slave quarters, and we were interviewed as cousins, as acknowledged descendants of Thomas Jefferson.

It wasn’t always that way for Shannon Lanier. He knew from his family history that he was descended from Madison Hemings, the son of Sally Hemings and Thomas Jefferson. He told the story of being in the second grade during a class on the American presidents when he stood up and announced to the class that he was a great grandson of Thomas Jefferson, the third president. He was told by the teacher to sit down and stop telling lies. In order to get him out of trouble with his teacher, Shannon’s mother had to go to the principal the following day and tell him that what Shannon had said in class was true.

But for years before and afterward, few people — white people, anyway — believed that Jefferson had fathered Sally Hemings children. Not until a DNA test was released in 1998 did historians come around to accept the oral history of the Hemings family that had existed for more than a century.

It was then that I met Shannon for the first time. In 1999, I invited about 50 of my Hemings cousins to the family reunion of Jefferson descendants at Monticello. It did not go well. At that time Monticello was just beginning to come to grips with the legacy of Thomas Jefferson’s owning slaves. You could still take a tour of the house and never hear the word “slave” uttered by one of the docents. As for the white descendants of Jefferson, they were not happy with the Sally Hemings descendants crashing their reunion. They were especially unhappy with me because I invited the Hemmings. The racists and white supremacists among us were enraged. I received several hundred hate mails and more than one hundred death threats. According to them I was a “race traitor,” because I had embraced my Hemings cousins.

For the next three years we kept going back. I was trying to convince the white descendants of Jefferson to accept our Hemings cousins into the family. In 2002, they held a vote, and it went 95 to 6 against the Hemings family. Five of the six voting yes, that the Hemings were indeed our cousins, were me and my brother and sisters.

Twenty years have passed since I first invited my cousins in the Hemings family to Monticello. It’s a different place now. They uncovered the slave quarters where Sally and one of her brothers lived. They found and have preserved one slave graveyard, and they are actively looking for more.  Today if you take a tour, you learn as much about slave life at Monticello as you to about Thomas Jefferson himself.

I read an essay last week about the controversy in Virginia over the racist photos in Governor Ralph Northam’s yearbook. The author of the essay said there is a big difference between holding racists beliefs and acts of racism. Putting on blackface, or wearing a Ku Klux Klan costume is an act of racism. So is waving a confederate flag, or celebrating icons like monuments to confederate generals. They are overt expressions of a poisonous idea. They are meant to hurt and to assert the supremacy of the white race.

More than 240 years after Thomas Jefferson wrote that all men are created equal, we still see too many overt acts of racism, and not nearly enough acts of equality. Why couldn’t Ralph Northam have published a photo in his yearbook of him and his friends posing next to the statue of Arthur Ashe on Richmond’s Monument Avenue? His is the only statue of an African American displayed along with those of Robert E. Lee, Jefferson Davis and others associated with the confederacy and white supremacy.

The photograph you see here is a picture of who we are as Americans. One day, a photograph of two cousins, one black and one white, will not be seen as unusual. One day, acts of equality will outweigh acts of racism. Until that day, however, Shannon and I will keep fighting for what’s right. And one day, we will win.