After Parkland, everything is different: NRA's in decline and gun control is possible

House Democrats will pass a gun control bill this week — amazingly, Senate Republicans may go along. It's a new day 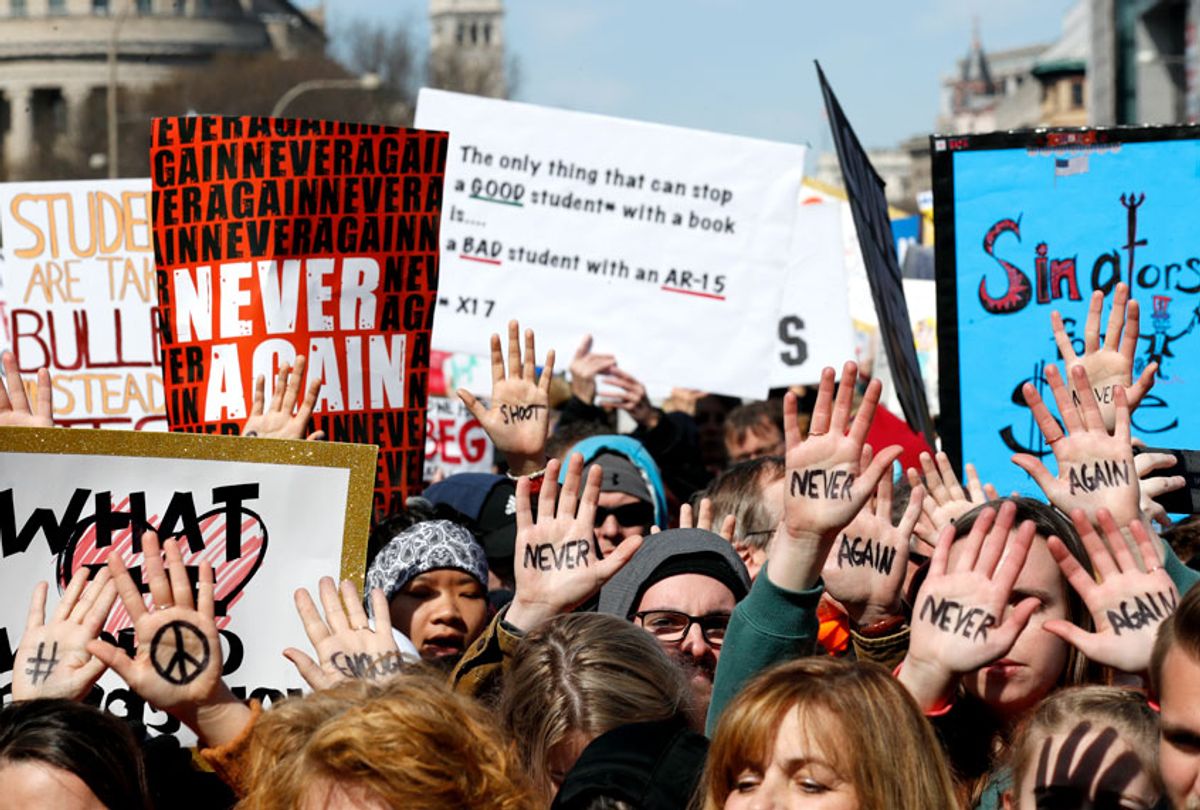 People hold their hands up with messages written on them during the "March for Our Lives" rally in support of gun control, Saturday, March 24, 2018, in Washington. (AP/Alex Brandon)
--

The Democratic-controlled House Judiciary Committee is expected to pass a gun control bill on Wednesday. Some of the most vulnerable House Democrats, including those elected in previously red districts, have said they would support gun control bills as expansive as a ban on assault-style weapons. Many of them ran on an unabashed push for increased gun control in the midterm elections and beat GOP incumbents backed by the National Rifle Association. This sweeping shift in the gun debate comes on the one-year anniversary of the Feb. 14, 2018 shooting at Marjory Stoneman Douglas High School in Parkland, Florida. That's no accident.

Gun control measures failed to gain traction in Congress in the immediate aftermath of the Parkland shooting. But that was with Republicans in complete control on Capitol Hill. The activist movement driven by Parkland survivors has clearly of shifted the political climate around gun-safety legislation, and was a major factor in flipping the House to the Democrats last November.

An Associated Press survey found that 8 percent of midterm voters called guns the top issue facing the nation. While that's not a remarkable percentage in itself, those voters broke for Democrats over Republicans better than four to one. Nearly 80 percent of the 62 freshman Democrats elected in the midterms ran on increased gun control. According to a Reuters analysis, that figure far outstripped the proportion of candidates who did so in 2016. The NRA was even outspent by gun control groups in last year's election, for the first time in recent history.

Parkland has served as a watershed moment, and gun control advocates have seized it.

Parkland students and their allies began calling for legislation only hours after a gunman shot 17 people with a legally-purchased AR-15-style semiautomatic rifle. Those students went on to create one of the largest youth-led movements in history, organizing the March For Our Lives rally and visits to Capitol Hill to lobby lawmakers. Less than a month after the Parkland shooting, Florida's Republican legislature passed the Marjory Stoneman Douglas High School Public Safety Act, It was the first gun control bill enacted in Florida in decades and was signed by then-Gov. Rick Scott, a Republican. The law allows authorities to seize firearms from people deemed a threat, and implements a three-day waiting period on gun purchases.

“I’ve never seen a community so unified in the way that it was after the shooting. It’s not just that something horrible happened, it’s that it’s a shared experience that we’ve all had,” Parkland survivor Delaney Tarr told Salon’s Rachel Leah. “We get it. We get not only going through this tragedy, but the huge weight of activism, the pressure of it.”

Parkland’s activism has been intergenerational and bipartisan. Parents have traveled to the White House to meet with President Trump’s task force on school shootings. Some community members have partnered with prominent Republicans to advocate for an assault-weapons ban in Florida. A bipartisan bill in the House that requires background checks is expected to pass a major hurdle on Wednesday.

Since the beginning of this session, Democratic lawmakers in Congress have pushed for gun control legislation. One week after taking control, House Democrats marked the eighth anniversary of the mass shooting that nearly killed their former colleague, Arizona Rep. Gabby Giffords, by introducing a bill to expand background checks to nearly all firearms sales. A week before the Parkland anniversary, House Democrats held the first hearing on gun violence in eight years. (At that hearing, Rep. Matt Gaetz, R-Fla., got into a shouting match with a Parkland parent who lost his child in the Valentine’s Day massacre.)

A number of high-profile Democratic presidential candidates in the Senate have co-sponsored an assault weapons ban bill, including Kamala Harris, Cory Booker, Bernie Sanders,  Elizabeth Warren, Kirsten Gillibrand and Amy Klobuchar. In all, 67 new gun laws were enacted by both Republican and Democratic legislators in 26 states and the District of Columbia in 2018, according to a year-end report by the Giffords Law Center to Prevent Gun Violence.

In 2017, the NRA’s revenues dropped by 15 percent from the previous year, driven largely by a decline in member dues following the election of Donald Trump. Combined with its heavy spending in the 2016 campaign and record spending on lobbying federal agencies and lawmakers over the last two years, the NRA now finds itself in deep financial debt. Last year, for the first time in nearly two decades, polling indicated that more Americans held a negative view of the gun lobby than a positive view.

As Salon's Amanda Marcotte has argued, "The gun industry may soon find itself in the same boat as the tobacco industry was a couple of decades ago, hit by the twin forces of increasing public support for regulation and declining public interest in its products. What was once a behemoth that seemed impossible to defeat is starting to show signs of weakness, beaten down as much by the invisible hand of the free market as by political opposition."

Given the monomania of executive vice president Wayne LaPierre, the NRA never had the vision or imagination to seize the initiative after the Columbine school shooting in 1999. It could have done so by championing sensible firearm regulation, particularly enhanced background checks prior to the sale of a firearm, closing the gun show loophole and denying a firearms to the mentally unstable.

Instead, after Sandy Hook in 2012 the NRA doubled down on the crazy and with each subsequent massacre it has tried to demonize any survivors who dared question its increasingly unhinged logic. Since then, parents who lost children to gun violence have taken office in state legislatures and Congress with the express intent to write legislation meant to clamp down on the gun lobby.

Republicans, reluctantly, admit as much. “There is a distinct possibility that we could have enough Republicans to get to 60,” Sen. Pat Toomey, R-Pa., said of House Democrats' bill to pass universal background checks for gun purchases this week.

This may be the Parkland massacre’s lasting legacy: It has accelerated the NRA's long march to irrelevancy, and turned the tide on an issue that long seemed intractable. It's about time.