"That is so much jail time," Fox News' Andrew Napolitano says. "He might very well be a candidate for a pardon" 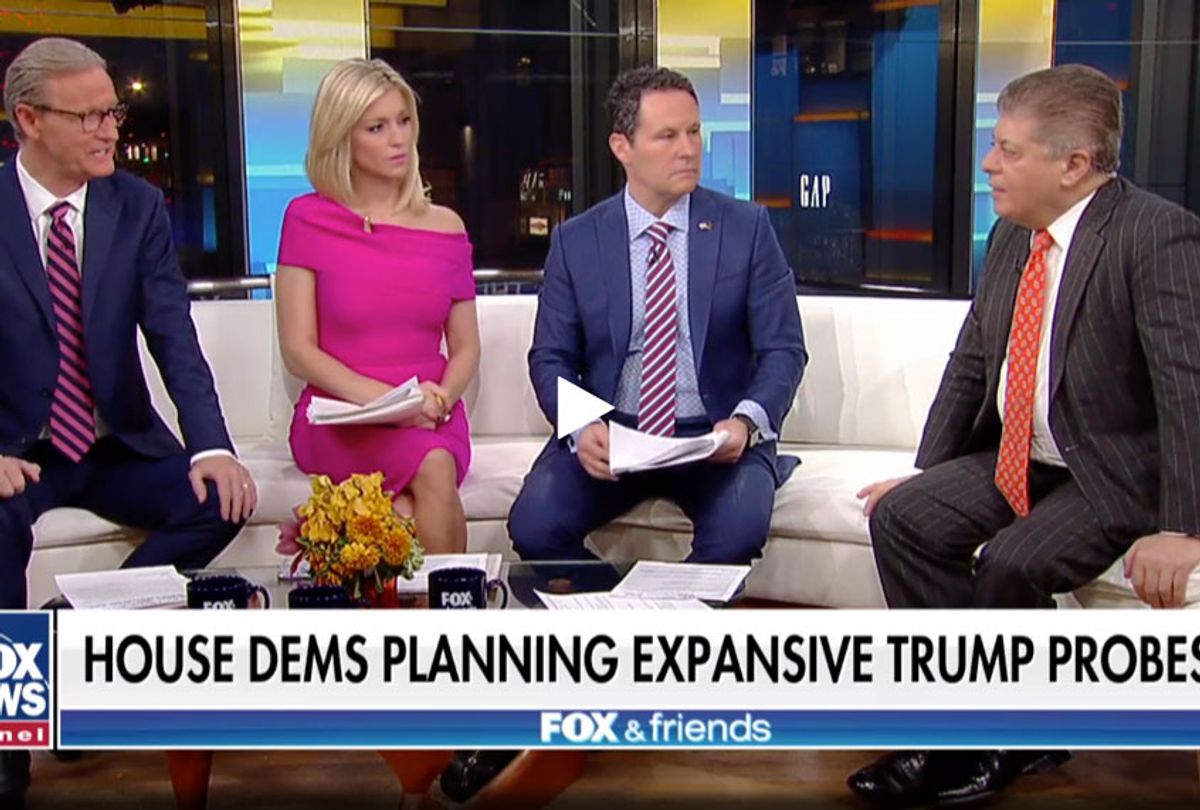 One day after Paul Manafort, the longtime Republican consultant who spent five months as President Donald Trump's campaign chairman during the 2016 election, was found by a judge to have "intentionally" lied to investigators and thereby broken the rules of his deal as a cooperating witness, "Fox & Friends" floated the possibility of the commander-in-chief could grant Manafort a presidential pardon.

"Here's what they did with Paul Manafort. I've never heard of this before," Fox News senior judicial analyst Andrew Napolitano explained. "They had him testify before the same grand jury that indicted him, and then a federal judge found that he lied to that grand jury. This tells me —"

"Not on all counts, though, right?" co-host Brian Kilmeade interrupted.

"No, five alleged lies — she found that he committed three. This tells me, A, he's exposed to more than 20 years in jail," Napolitano replied. "That is so much jail time. He might very well be a candidate for a pardon —"

"And the public might accept the pardon," Napolitano continued. "It also tells me, B, Mueller is still on the hunt."

On Wednesday evening Judge Amy Berman Jackson ruled that Manafort had deceived authorities about his interactions with alleged Russian intelligence operative Konstantin Kilimnik. Jackson also decided that Manafort had lied about a payment he had received from a pro-Trump campaign group and about an unidentified investigation.

Jackson disagreed with Mueller's investigative team, however, on the question of whether Manafort lied about his recent contacts with officials in Trump's administration and about Kilimnik's involvement in a conspiracy to obstruct justice, for which both he and Manafort have been indicted.

Manafort is specifically accused of having deceived Mueller's team about sharing polling data with Kilimnik during the 2016 presidential election. Because Manafort and Kilimnik had worked together during eastern European elections that were intended to help put pro-Russia politicians into positions of power, this detail could be damning in terms of whether or not the Trump campaign colluded with the Russian government. Manafort is also believed to have lied to investigators about a plan that he was working on with Kilimnik to develop a settlement involving Russia's imperialistic military campaigns against Ukraine.

Although Manafort had previously only faced up to 10 years in prison, that could change in light of the revelation that he lied to authorities. Manafort, after being convicted of various bank and tax fraud charges, had struck a plea deal with special counsel Robert Mueller, who is investigating allegations of collusion between Trump's campaign and Russia, in return for a lesser sentence. However, Mueller voided the cooperation agreement with Manafort after the former campaign chairman allegedly lied to the FBI, as well as to his team, about contacts he had with Trump administration officials and his connections to Russian-linked intelligence officers two months after reaching a plea deal, according to the special counsel. Manafort could now face a longer sentence in light of the revelation that he did not live up to his end of that deal and work with authorities – possibly the rest of his life in prison.

Manafort joined Trump's presidential campaign in March 2016 and became his campaign chairman in May. He left the campaign in August, days after the New York Times and the Associated Press published reports of his business dealings with Russia-aligned leaders in Ukraine involving millions of dollars of undisclosed cash payments and undisclosed lobbying efforts in the U.S.