Activist defeat of Amazon is a win for democracy over technocracy

“These voices killed this deal... That could set a remarkably good precedent moving forward," one economist said 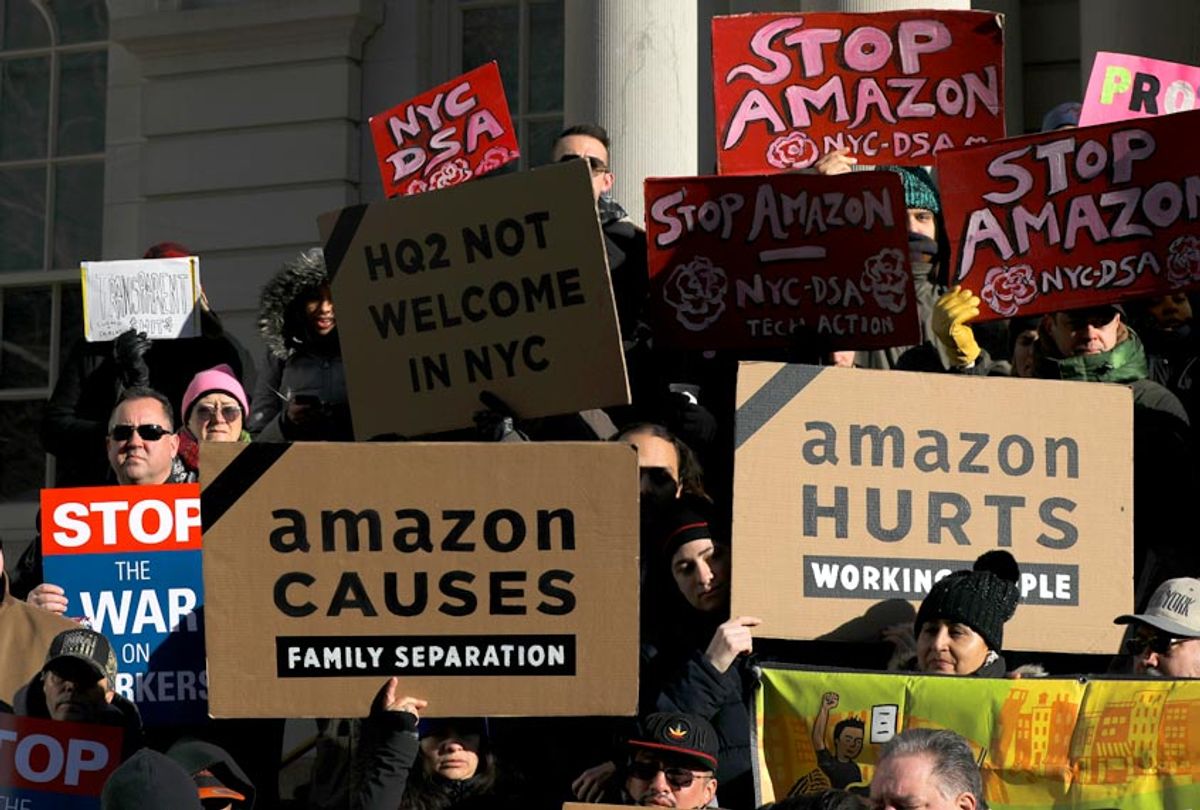 Protestors rally against Amazon and the company's plans to move their second headquarters to the Long Island City neighborhood of Queens, at New York City Hall, January 30, 2019 in New York City. (Getty/Drew Angerer)
--

On Thursday, Amazon made an unexpected announcement: the tech behemoth was pulling out of a very publicized deal. Indeed, Long Island City, in the New York City borough of Queens would no longer be home Amazon’s second headquarters.

“After much thought and deliberation, we’ve decided not to move forward with our plans to build a headquarters for Amazon in Long Island City, Queens,” the company said in a statement. “For Amazon, the commitment to build a new headquarters requires positive, collaborative relationships with state and local elected officials who will be supportive over the long-term.”

The unlikely ending could never have been predicted when Amazon first announced it was searching for its second headquarters in September 2017. In a little over one month, the company received 238 proposals from very enthusiastic cities across the United States and Canada, many of which included very generous tax breaks (or giveaways) to win over a company whose market valuation reached $1 trillion in 2018.

However, when Amazon announced New York City was one of two locations for its second headquarters — the second being Arlington, Virginia — and details about the deal became more clear, Queens locals began to wonder if the massive tax giveaway was worth it. Indeed, New York state Governor Andrew Cuomo said the state’s proposal offered Amazon an estimated $3 billion in subsidies and grants to win the deal in exchange for 25,000 jobs over 10 years. The questioning and immediate pushback following the announcement likely came as a surprise to Amazon, considering the fawning that had happened throughout the competition. The corporation believed states and cities were lucky to be chosen by the e-commerce giant.

This week’s announcement has been hailed as a victory by local opposition and policymakers like Democratic Representative Alexandria Ocasio-Cortez, who represents New York's 14th congressional district.

"Today was the day a group of dedicated, everyday New Yorkers & their neighbors defeated Amazon’s corporate greed, its worker exploitation, and the power of the richest man in the world," Ocasio-Cortez said.

Cuomo said it was a “lost economic opportunity” for New York.

“Bringing Amazon to New York diversified our economy away from real estate and Wall Street, further cementing our status as an emerging center for tech and was an extraordinary economic win not just for Queens and New York City, but for the entire region, from Long Island to Albany's nanotech center,” Cuomo said in a statement.

However, Matthew Gardner, a senior fellow at the Institute on Taxation and Economic Policy, told Salon it is impossible to know truly if New York missed out on an economic loss or not, and to think of it as a “good” or “bad” deal is a “one-dimensional” way to look at it.

“From an opportunity-cost perspective what you can say is that by choosing not spend 3 billion dollars on tax breaks for one for one of the biggest companies in the world, New York has left itself the option of spending that 3 billion dollars in more fruitful ways such as infrastructure, education and healthcare ,” Gardner said. “Part of it could be spent on truly targeted tax incentives for smaller local businesses, too.”

Tim Bartik, Senior Economist at W.E. Upjohn Institute for Employment Research, told Salon it is impossible to know if New York saved itself from a bad deal, too, but he did say that the deal itself was “excessive.”

“Their bid was in accord with past New York practices, but New York has traditionally had about triple the average incentive offer, compared to the average state/local offer in the U.S.,” Bartik said, pointing to his incentive database.

“I think New York would benefit from cutting back on its incentives, particularly its long-term incentives, which probably don't drive location and expansion decisions much, and potentially undermine the next Governor or Mayor's tax base,” he added.

New York was not unique in its incentive offerings. The tax breaks offered from various cities made news themselves, as cities were fundamentally groveling to win Amazon’s heart. Chicago offered to redirect 50 to 100 percent of Amazon employees' income taxes back to Amazon — in effect, gifting billions of dollars of workers' tax money. Newark, New Jersey, reportedly offering Amazon up to $7 billion in tax breaks. Similarly, Philadelphia offered Amazon $1 billion in tax incentives.

Gardner said this is the first case where such a deal has been announced and gone down in a way that shows local stakeholders were asking the right questions.

“These voices killed this deal,” he said. “That could set a remarkably good precedent moving forward if companies like Amazon want to run these deals down the throats of local taxpayers,” adding that for future companies trying to make similar deals, they “need to have buy-in from the locals upfront.”

Gardner added that success in this deal being killed ultimately lies in what local politicians do next.

“New York policy makers ought to be excited about moving forward and seeking out an alternative agenda to economic development,” he said.

As  for Amazon, the company said it does not “intend to reopen the HQ2 search at this time.”

“We will proceed as planned in Northern Virginia and Nashville, and we will continue to hire and grow across our 17 corporate offices and tech hubs in the U.S. and Canada,” the company said in its statement.