After McCabe's revelations and confirmation that Manafort lied to Mueller, Trump clearly feels the walls closing in 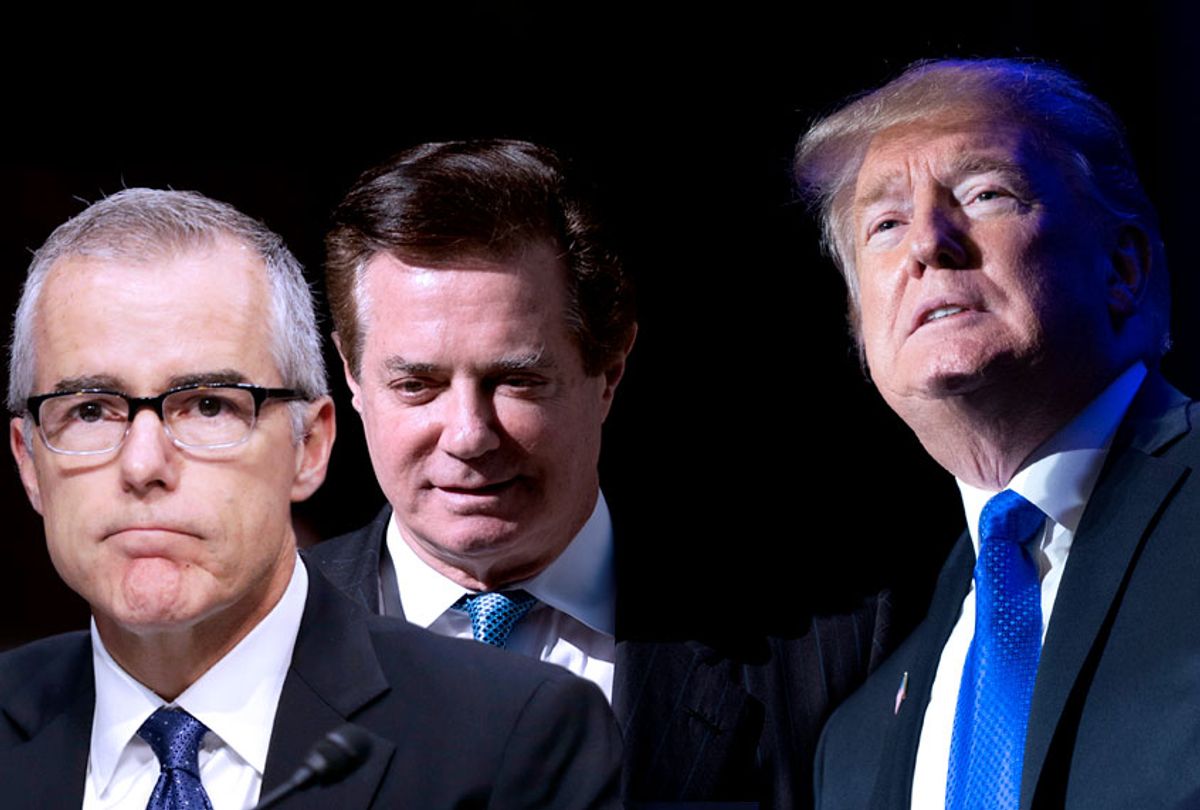 Valentine's Day 2019 was a day to remember. Americans woke up to news about Andrew McCabe, the former acting director of the FBI, and his new book that outlines the wild days in May of 2017 when members of the Justice Department allegedly considered invoking the 25th Amendment to remove President Trump from office.  By that night we had word that Trump would go through with his threat to declare a national emergency so he can circumvent the will of Congress and order the construction of his border wall.

Just to add to the general chaos, in between breaking news stories,  legal and national security experts were still poring over earlier news from the Paul Manafort case that had everyone who is following the Russia scandal closely just a little breathless. A federal judge has affirmed that the president's former campaign chairman lied to special counsel Robert Mueller's team about damning evidence that we can infer may implicate Donald Trump.

It appears the judge has largely agreed with what the special counsel argued and that not only did [Manafort] lie, but the motivation here is that if he told the truth about his relationship with someone with Russian Intelligence while he was the campaign chairman that would be so damaging  to Trump that it would negate his chance of a pardon.

I have never subscribed to the theory that the president is a wily operator who's always strategizing ways to distract the media and the public from bad news about him. Trump has a strong feral survival instinct, so he's always bobbing and weaving, but I doubt he makes these choices consciously. In this case, however, he seems a bit too eager to draw attention to the McCabe story considering how damning it actually is.

Perhaps Trump really was upset. But it's also the case that he knew upon waking up Thursday morning that he had just lost the biggest legislative fight of his presidency. He staged the longest government shutdown in American history and wound up getting less than he would have gotten had he taken the border funding deal Congress agreed to in December.  He also undoubtedly realized that in order to save face even a little, he would have to declare the national emergency and create a rift among his allies in Congress, possibly changing the dynamic still more.

As Salon's Amanda Marcotte pointed out on Thursday, Trump had already been in the unusual position of having to court his usually slavering media supporters to get them to accept the inevitable. McCabe's book probably seemed like the best option among all the bad news cascading down on him in this very bad week.

Needless to say, Trump's defenders on Fox News and elsewhere in the right-wing media find McCabe's revelations to be convincing evidence of an attempted "deep state" coup. But coming on the heels of this news about the Manafort case and the accumulated evidence of the last three years, it was a reminder to the rest of us of that crazy period around the Comey firing, when Trump had the Russian foreign minister and ambassador up to the Oval Office the very next day and told them this:

“I just fired the head of the F.B.I. He was crazy, a real nut job,” Mr. Trump said, according to the document, which was read to The New York Times by an American official. “I faced great pressure because of Russia. That’s taken off.”

Imagine how that must have looked to law enforcement and intelligence officials at the time. And consider that they also knew that Trump shared "code-word information” with his visitors, one of the highest classification levels used by American spy agencies. One official characterized this giveaway as "more information to the Russian ambassador than we have shared with our own allies.”

McCabe made more news in an excerpt from a CBS interview to air this weekend by saying that he not only opened a counterintelligence investigation at the FBI, as reported earlier, but also opened an obstruction of justice investigation around the same time, based upon Trump's behavior and his insistence that the Justice Department was to do his bidding. McCabe appears to have been right to do so.

One of the president's most fervent defenders inadvertently made this point very clear in a tweet on Thursday:

All those firings had to do with the Russia investigation.

Former U.S. attorney and deputy assistant attorney general Harry Litman said on MSNBC, "Is it a slow-motion Saturday night massacre? That's what they were worried about at the time. In some ways, it's worse. It is as McCabe says, a fall-off in standards of presidential accountability such as they've never had before."

It should be noted that there's always some concern about powerful federal law enforcement agencies investigating a president, whether for the purpose of blackmail, as under longtime FBI head J. Edgar Hoover, or because of political bias against his policies. But if anything, the law enforcement and intelligence communities in Washington tend to be conservative Republicans. So it would be distinctly odd if they decided to go after a Republican administration right out of the gate for political purposes, even if they thought the president was a nut or a fool. They would most likely trust that the party and the bureaucracy would assert itself.

In this case, with the evidence people at the FBI and Justice Department had of Russian interference, along with the bizarre behavior of the president and his campaign officials, law enforcement took some protective action. Some of it was reckless and got them into trouble. But it's not hard to understand why they went there.

We've now had a federal judge in the Manafort case affirm what appears to be a central piece of Robert Mueller's larger theory, which may implicate the president in a criminal conspiracy. We earlier saw another federal judge look at the evidence in the Michael Flynn case and get so agitated he accidentally threw out the word "treason." And as of Thursday evening, the United States has a new attorney general, William Barr.

We don't know yet whether Barr's years in private life were spent being brainwashed by right-wing media (and there is some evidence that they were) but at one time he was seen as a man who cared about the Department of Justice and saw himself as a patriot. He too will probably see all the evidence in the Mueller probe as early as Friday. Much depends upon whether this lifelong Republican lawyer has the same reaction to that evidence as all these other conservative cops, G-men, spies, federal prosecutors and federal judges have had over the past couple of years.