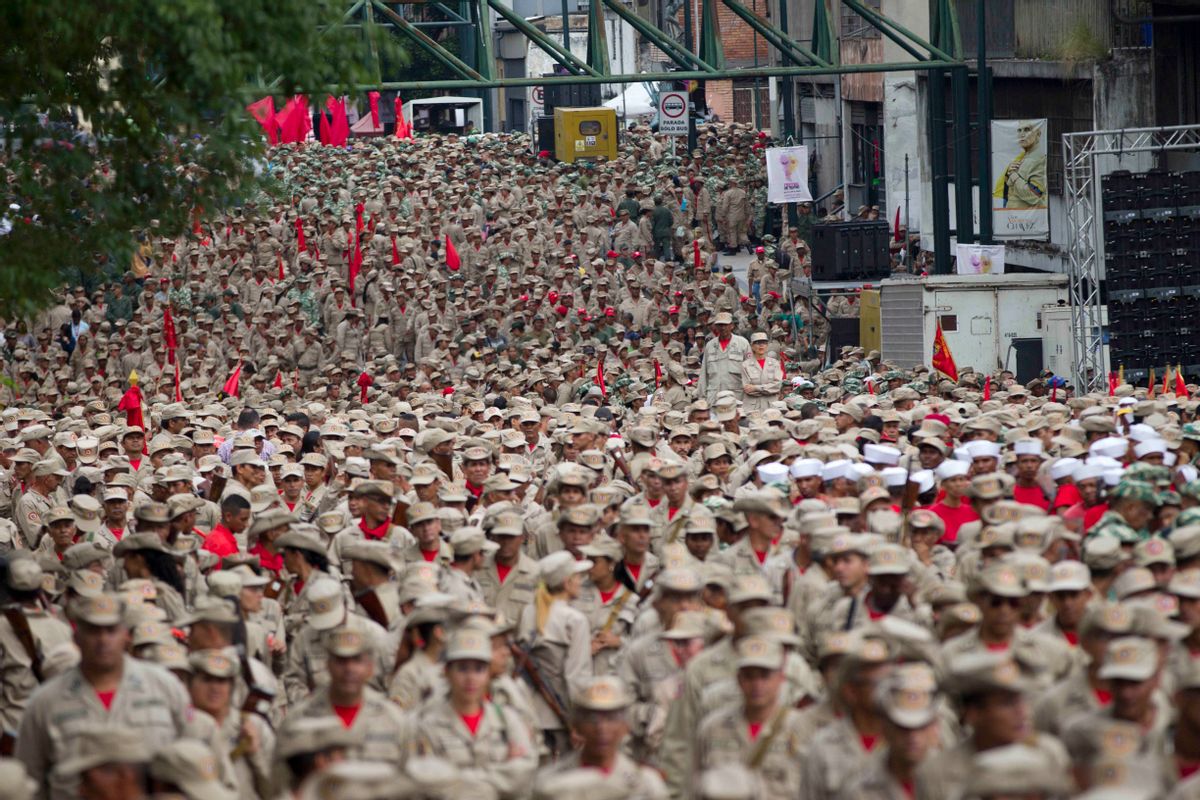 Members of the Bolivarian Militia march during their seventh anniversary celebration, in front of the Miraflores presidential palace in Caracas, Venezuela, Monday, April 17, 2017. Officially known as the Venezuelan National Bolivarian Militia, it is a branch of the National Armed Forces of Venezuela created by the late President Hugo Chavez. The anniversary celebration took place with unrest spreading in Venezuela as confrontations between opposition demonstrators and authorities continue. (AP Photo/Ariana Cubillos) (AP)
--

As we watch a U.S.-backed coup unfold in a distant country, as in Venezuela today, our eyes are drawn to the diplomatic, military, and economic elements of the U.S. campaign. The picture of a scowling John Bolton with a big yellow notepad with the message “5,000 troops to Colombia” reveals the diplomatic and military elements. The New York Times headline “U.S. Sanctions Are Aimed at Venezuela’s Oil. Its Citizens May Suffer First” reveals the economic element.

But U.S. foreign policy mobilizes every available resource for regime change and for counterinsurgency. Among those resources, you will always find academics. The pen may not always be mightier than the sword, but behind every U.S.-backed war on a foreign people there will be a body of scholarly work.

The academic laboratory of the Venezuelan coup has the highest academic pedigree of all — it’s housed at Harvard. Under the auspices of the university’s Center for International Development, the Venezuela project of the Harvard Growth Lab (there are growth labs for other countries as well, including India and Sri Lanka) is full of academic heavyweights, including Lawrence Summers (who once famously argued that Africa was underpolluted). Among the leaders of the growth lab is Ricardo Hausmann, now an adviser to Juan Guaido who has “already drafted a plan to rebuild the nation, from economy to energy.”

In an interview with Bloomberg Surveillance, Hausmann was asked who would be there to rebuild Venezuela after the coup — the IMF, the World Bank? Hausmann replied (around minute 20), “we have been in touch with all of them. … I have been working for three years on a ‘morning after’ plan for Venezuela.” The hosts interrupted him before he could get into detail, but the interview concluded that bringing back the “wonderful Venezuela of old,” for investors, would necessitate international financial support. Never mind that the “wonderful Venezuela of old” was maintained through a corrupt compact between two ruling parties (called “Punto Fijo”) and the imprisonment and torture of political opponents—amply documented but forgotten by those who accuse Maduro of the same crimes.

The Growth Lab website provides some other ideas of what Hausmann’s plan likely includes: Chavez’s literacy, health care, and food subsidy “Missions,” a growth lab paper argues, have not reduced poverty (and, implicitly, should go). Another paper argues that the underperformance of the Venezuelan oil industry was due to the country’s lack of appeal to foreign investors (hence Venezuela should implicitly be made more appealing to this all-important group). A third paper argues that “weak property rights” and the “flawed functioning of markets” are harming the business environment — no doubt strengthening property rights and getting those markets functioning again will be in the plan. If this sounds like the same kind of neoliberal prescription that devastated Latin American countries for generations and was imposed and maintained through torture and dictatorship from Chile and Brazil to Venezuela itself, that is because the motivation is to bring back the “wonderful Venezuela of old.”

A Wall Street Journal article by Bob Davis from 2005 credits Hausmann with being part of the original Washington Consensus in 1989, “the economic manifesto [that] identified government as a roadblock to prosperity, and called for dismantling trade barriers, eliminating budget deficits, selling off state-owned industries and opening Latin nations to foreign investment.” Decades later, if the WSJ article is to be believed, Hausmann looked at the data and found “Deep reforms; lousy growth,” and concluded that there “must be something wrong with the theories of growth.”

Hausmann’s academic work is highly technical, macroeconomic modeling. The models reveal the consequences of the assumptions used to construct them: at times there is some data fit to them. Others are applied mathematics exercises. A paper on 2005 “Growth Accelerations” looks for periods when countries’ economies grew quickly. An earlier paper, from 2002, presents a roundabout argument on the so-called “resource curse,” in which oil-dependent economies (like Venezuela) suffer poor developmental performance, arguing at that time that “more interventionist policies to subsidize investment in the non-tradable sector may also have a role to play.”

But whether it was written by Hausmann or not, the economic plan of Guaido’s post-coup government has no such heterodox ideas in it, however. It is difficult to imagine Hausmann or Guaido going against Bolton, who told Fox News that “It will make a big difference to the United States economically if we could have American oil companies invest in and produce the oil capabilities in Venezuela.” The post-coup Venezuelan economy will not be all about mathematically rigorous experiments in economic growth like Hausmann’s academic work. It will be about the privatization of Venezuela’s assets.

Hausmann might have a long record of publishing models of economic growth, but he has maintained a passion for regime change in Venezuela for more than a decade — even at the expense of academic integrity. After the Venezuelan opposition failed to oust Chavez in a coup in 2002 and failed again to oust him using a strike of the Venezuelan oil company in 2003, they resorted to constitutional means — a recall referendum, in 2004. Voters overwhelmingly rejected the recall in the referendum, which featured then new electoral machines that did an electronic tally verified by printed ballots (still the system used in Venezuela and praised by former U.S. president Jimmy Carter in 2012 as the “best in the world”) and was overseen by numerous international observers including the Carter Center. But Hausmann prepared a highly dubious statistical analysis to cast doubt on the outcome. Hausmann’s dubious statistics were cited numerous times. More may have been made of them had they not been thoroughly discredited by the U.S.-based Center for Economic and Policy Research (CEPR). Mark Weisbrot of CEPR summarized the episode in a 2008 report:

“... the political impact of economic and econometric research on Venezuela can be very significant. For example, in 2004, economists Ricardo Hausmann of Harvard’s Kennedy School (a former Minister of Planning of Venezuela) and Roberto Rigobon of MIT published a paper purporting to show econometric evidence of electronic fraud in the 2004 presidential recall referendum. The theory of the fraud was implausible in the extreme, the statistical analysis was seriously flawed, and the election was observed and certified by the Carter Center and the Organization of American States. Nonetheless this paper had a substantial impact. Together with faked exit polls by Mark Penn’s polling firm of Penn, Schoen, and Berland — which purported to show the recall succeeding by a 60-40 margin, the mirror image of the vote count — it became one of the main pieces of evidence that convinced the Venezuelan opposition that the elections were fraudulent. On this basis they went on to boycott the 2005 congressional elections, and consequently are without representation in the National Assembly.

“The influence of this Hausmann and Rigobon study would probably have been much greater, but CEPR refuted it and then the Carter Center followed with an independent panel of statisticians that also examined these allegations and found them to be without evidence. Nonetheless, the Wall Street Journal and other, mostly Latin American publications, used the study to claim that the elections were stolen. Conspiracy theories about Venezuelan elections continue to be widely held in Venezuela, and are still promoted by prominent people in major media sources such as Newsweek, even with regard to the recent constitutional referendum of December 2, 2007.”

Hausmann’s 2004 statistical gambit is actually an established part of the U.S.-coup playbook. The academic analysis of an election and the finding of flaws, real or imagined, in an electoral process are the beginning of an ongoing claim against the target’s democratic legitimacy. The created flaw is then repeated and emphasized. Even if it was spurious and debunked, as was Hausmann’s 2004 analysis, it can continue to perform in media campaigns against the target. After years of such repetition, the target can safely be called a “dictator” in Western media, even if the “dictator” has more electoral legitimacy than most Western politicians.

The elected president of Haiti, Jean-Bertrand Aristide, was overthrown in a U.S.-backed coup in 2004. Haiti’s Hausmann was an academic named James Morrell. After Aristide won reelection in 2001 in a landslide, he stood poised to make major legislative moves on behalf of the country’s poor majority. Morrell published an article about how Aristide had “snatched defeat from the jaws of victory,” because of irregularities in the election of eight senators (out of 19, 18 of which were won by candidates from Aristide’s party): only the votes of the top four candidates in the senatorial elections were counted for these senate seats. These senators would have won regardless of the methodology used, but these supposed irregularities were enough to initiate the financial punishment of Aristide’s government: the suspension of Inter-American Development Bank (IADB) financing, to the tune of $150 million. All eight senators were made to vacate their seats, but the IADB never provided the loan. Morrell’s article played a key role as the intellectual backing for the attack on the Aristide government’s legitimacy, despite Aristide’s overwhelming victory in the 2001 election and the contrived nature of the “irregularities” in the senate seats.

The coup against Aristide unfolded over a period of years: economic warfare, paramilitary violence, and the eventual kidnapping of Aristide from the palace were the tactics of choice in that regime change. But the academics preceded the coup, and followed it, providing justifications and obfuscations of what was happening in the post-coup, counterinsurgency violence.

Latin American social violence has even longer-running academic underpinnings. Today, Colombia’s president Iván Duque (the protégé of the previous warlord-president Álvaro Uribe Vélez) leads the call for regime change in Venezuela. Duque’s country was reshaped by a multigenerational civil war during which the countryside was depopulated, through paramilitary violence, of millions of peasants (many of them Afro-Colombian or Indigenous). The academic theorist behind this was the Canadian-born, U.S. “new dealer” Lauchlin Currie, whose theory (summarized by academic James Brittain in a 2005 article), called “accelerated development,” was that “the displacement of rural populations from the countryside and their relocation to the urban industrial centres would generate agricultural growth and technological improvements for Colombia’s economy.” Currie implemented these ideas as the director of the foreign mission of the World Bank from 1950, and as adviser to successive Colombian presidents. Today Colombia continues to suffer from Currie’s academic theories. Despite the peace deal of 2016, it has the largest internally displaced population in the hemisphere.

John Maynard Keynes wrote that “Practical men, who believe themselves to be quite exempt from any intellectual influence, are usually the slaves of some defunct economist. Madmen in authority, who hear voices in the air, are distilling their frenzy from some academic scribbler of a few years back.”

As Max Blumenthal and Ben Norton show in their article about him, Guaido is just such a practical man, a U.S.-foundation-funded street fighter for the rich neighborhoods of Caracas. But he certainly has use of the academic scribblers gathered at Harvard.

When it comes to suppressing the people of Latin America in their hopes to control their own fortunes and their own resources, the scribblers have a key role to play, as much as their diplomatic and military counterparts.