Green buildings must do more to fix our climate emergency

Architects see buildings as a possible solution to the climate crisis 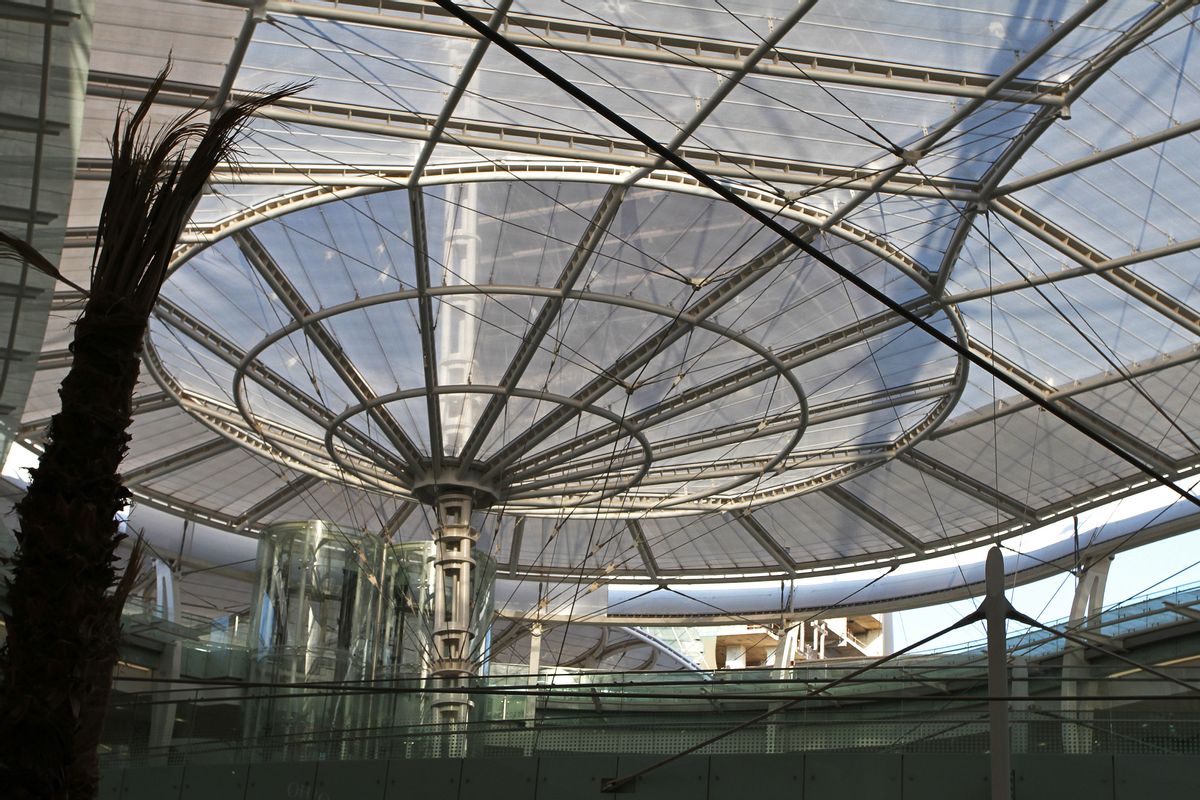 In this July 4, 2016 photo, the sun sets through the rooftop glass above one of the new Abdali Mall's light tubes, which redirects sunlight from the roof to the basement of Jordan's first energy-efficient shopping complex in Amman, Jordan. High-end boutiques, cinemas and gourmet coffee shops are tucked into an intricate ecosystem of natural heating and cooling, water recycling and hundreds of solar panels soaking up the sun's rays. Advocates for green building say sustainable building development is important in Jordan, where energy and water resources are quickly diminishing. (Layla Quran/AP Photo) (AP)
--

After more than three decades of talk about the potential of building green, we’ve still failed to change the way we design and construct buildings so that the built environment stops being a dominant contributor to runaway climate change.

The Earth has already warmed about 1℃ since the 19th century and it’s on track to rise another degree. This second degree would push stable civilization to the very brink. In its recent report, the UN Intergovernmental Panel on Climate Change called for “urgent and unprecedented changes” to reduce greenhouse gas emissions (GHGs) so that we avoid reaching 2℃. While 1℃ may sound incremental, the action required to stop it is not.

C40, an urban climate action advocacy organization, was founded on the idea that cities are ideally positioned to stop the GHG juggernaut. And cities are starting to increase their formal policy commitments. In January, Vancouver joined other cities in declaring a state of climate emergency, a signal that urgent action is required.

Urbanists, engineers, architects, designers and developers — the built environment industries — know this. The industry created “green building” more than 30 years ago to prove that buildings can use less energy, store energy and even generate their own energy on-site. We know it can be done, but it needs policy, regulation and incentives in order for it to become business as usual.

Buildings are responsible for 40 per cent of energy-related carbon dioxide (CO2) emissions worldwide. The Global Alliance for Buildings and Construction reports that global building sector CO2 emissions are up three per cent since 2010.

Architects have seen buildings as a possible solution to the climate crisis. Rather than being a major contributor to GHG emissions by relying on fossil fuels, buildings could not only greatly reduce their demand for energy, but could generate clean, renewable energy. The built environment must be carbon-neutral by 2050, if we are to limit warming to below 2℃.

To move ideas like this forward, Architecture2030.org, a U.S.-based non-governmental organization, recently introduced the first national and international “Zero Code” building standard for new construction. It focuses on designing buildings with high energy efficiency that use no fossil fuels in their operation. The organization is working in California and China to put the policy into practice.

Although the game plan exists, adoption is slow. Existing moves to reduce GHG emissions are voluntary and there is no penalty for falling short on performance. It’s hard to call this a plan for transformation.

In North America, most green buildings are judged by a family of certification systems called LEED (Leadership in Energy and Environmental Design). But LEED’s actual impact on GHG emissions is uncertain.

We found only one peer-reviewed study showing that LEED projects reduce GHG emissions. In contrast, dozens of articles conclude LEED is primarily a “public relations tool” that offers the lure of “measurable publicity” and administrative convenience.

But there’s a catch. For new construction, it’s optional. If professors gave students an A at the beginning of the semester, with an option to have their performance evaluated at the end of the semester, how many would stick with the A? What effect would this have on learning?

The performance of LEED-certified buildings (and those that are not yet certified) are evaluated against a proprietary dataset and given an “Arc score.” This process anchors our progress to a baseline number, not towards constructing unprecedented sustainable buildings.

This streamlining can leave us to falter in our ambitions. When there are no consequences for failure, we set ourselves up for mediocrity, not progress. If we do not know how LEED buildings contribute to GHG emissions reductions, we cannot expect them to be a solution to the climate emergency.

Canada has said it will have “net-zero energy-ready” building codes in place by 2030. Here “ready” means that buildings may continue to use fossil fuels, but will be equipped with infrastructure to switch to on-site renewables. British Columbia is already piloting a subsidy program for the construction of 15 to 20 of these buildings.

The approach is comparable to the production of hybrid electric vehicles before plug-in electric vehicles as a more palatable, marketable and incremental path to change. In B.C., where hydroelectricity is abundant, a hybrid vehicle produces 53 times more emissions than a fully electric one.

GHG emissions from our buildings, worldwide, need to be 80 to 90 per cent lower in 2050 than they are today. The incrementalism is understandable, but the numbers do not work out.

We have the capacity to reduce energy-related C02 emissions from buildings to zero — or close to it. But we’re still far from being able back up the C40 claim that cities “are taking bold climate action, leading the way towards a healthier and more sustainable future.”

Big Oil is now being increasingly being hit with “climate liability lawsuits.” If we settle for baby steps in terms of GHG emissions, the built environment industries will be no different.