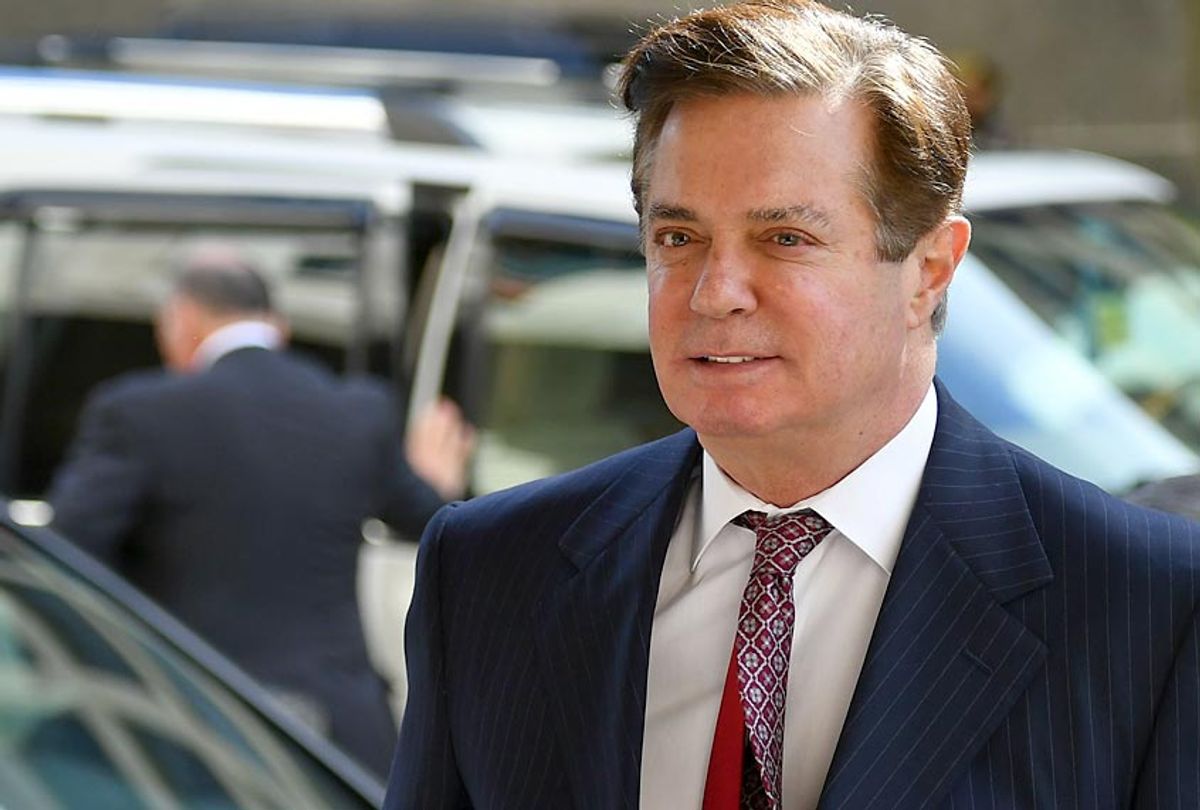 Paul Manafort arrives for a hearing at US District Court on June 15, 2018 in Washington, DC. (Getty/Mandel Ngan)
--

One thing you have to remember about these guys: it’s always worse than you think it is. So it goes with Paul Manafort, former Trump campaign chairman, current resident of the solitary confinement wing of a cellblock in a federal lock-up in Washington, D.C.

As Manafort stews behind bars, pundits have spent all week wondering why he would make the seemingly insane move of lying to Mueller’s investigators after he had signed an agreement to cooperate with them “fully, truthfully, completely, and forthrightly” concerning what he knew about the Trump campaign’s contacts with the Russian government. If you look back with me for a moment at what we have learned about Manafort over the last three years, maybe it’s not such a mystery at all.

Right from the start, Manafort was a dirty political rat-fucker and fixer in Republican politics.  After working on a couple of campaigns, he started a political consulting business with his scuzzy compatriots, Roger Stone and Lee Atwater. He went on to virtually invent the now lucrative practice of lobbying for right-wing foreign dictators and murderers like Angolan dictator Jonas Savimbi and dictator of the Philippines, Ferdinand Marcos, among others. In 2004, he went to work in the Ukraine for right-wing Putin-puppet Viktor Yanukovych, where he made friends with many of Yanukovych’s Russian oligarch patrons.

During Manafort’s trial on charges of money laundering and tax evasion, prosecutors produced evidence that between 2010 and 2014, Manafort was paid more than $60 million by Russia-friendly Ukrainian sponsors, including Rinat Akhmetov, the richest man in Ukraine.

But after Yanukovych was deposed by a popular uprising in 2014, Manafort was out of work and scrambling around looking for work in the United States. He found a political life-raft in the campaign of Donald Trump. In March of 2016, he was hired as a consultant on Trump’s campaign.  By May Trump had vanquished his primary opponents and was on his way to the nomination, Manafort was promoted to campaign chairman and charged with wrangling delegates at the Republican National Convention. He remained as Trump’s campaign chairman until August, when he was ousted following revelations of his receiving cash payoffs from Russia-friendly figures in the Ukraine during his time working for Yanukovych.

What you find in the career of Paul Manafort then is a peculiar, pungent mix of all the distasteful elements in the contemporary Republican Party. He had real political skills; he was a master fixer and image doctor; and over the years, he developed a big-time love of big bucks. Keep this in mind as we move forward.

What we knew of Manafort from the public record, however, had very little relation to what was really going on behind the scenes of the Trump campaign. After the revelations of his indictments by Mueller and the Eastern District of Virginia, and especially after this week’s order by U.S. District Judge Amy Berman Jackson in Washington, D.C., we know far more about what Manafort was up to on the Trump campaign.

Manafort was put in control of the Republican National Convention to insure that the anti-Russia plank critical of Putin’s invasion of Ukraine and seizure of Crimea was taken out of the Republican platform. Back in New York, he wasn’t sitting around Trump Tower making calls to Republican county chairmen.  No, he was busy attending the infamous meeting on June 9 at the Trump campaign headquarters with Jared Kushner and Don Jr. when the three of them met with six Russians with ties to Kremlin intelligence agencies.

As we now know from Judge Jackson’s order, Manafort was also meeting with his main Russian contact in the “Havana Room,” a cigar bar conveniently located in a building owned by the Kushner family at 666 Fifth Avenue. The Russian contact was Konstantin Kilimnik, a man with whom Manafort had partnered in the Ukraine when he worked for Yanukovych. Kilimnik had ties to Russian intelligence and was close to Oleg Deripaska, a prominent Russian oligarch and friend of Putin, with whom Manafort had a $10 million contract to promote his interests in the United States and elsewhere. A witness as his trial in Washington D.C. testified that Deripaska had loaned Manafort another $10 million, which he had never repaid.

What did Manafort do as soon as he moved into his offices in the Trump campaign in Trump Tower in the spring of 2016? Why, he sent a message to his Russian pal Kilimnik, who was now living in Moscow and working for Deripaska, asking what they could do together to “get whole” with Deripaska now that he was working for Trump.

Mueller’s prosecutors appeared before Judge Jackson seeking to prove that Manafort had lied to them after he had copped a plea on the second set of federal charges he was facing. The judge found that one of the major things Manafort had lied about was his meeting with Kilimnik in the “Havana Room,” where he was alleged to have passed polling data from the Trump campaign to his Russian contact. Prosecutors apparently knew Manafort had lied to them because his partner Rick Gates was at the meeting with Kilimnik, and he had been truthful when told them what had transpired between Manafort and Kilimnik.

To give you an idea of how seriously Mueller’s investigators took Manafort’s contacts with Konstantin Kilimnik, one of his prosecutors told Judge Jackson that his contacts with the Russian went “very much to the heart of” the Special Counsel’s broader mandate to investigate Russian influence in the Trump campaign during 2016.

Now we have to ask ourselves, why would Donald Trump’s campaign chairman be passing political polling data to a known Russian intelligence operative during the campaign? Well, the obvious answer is that Donald Trump knew exactly what he was doing when he hired Paul Manafort as his campaign chairman. He knew he was getting a guy who had the political skills to fix the anti-Russian plank in the Republican platform at the convention, and he knew that Manafort had extensive contacts with Ukrainian and Russian intelligence that went back more than a decade, and that Manafort could tap those contacts and pass information back and forth between the Trump campaign and the Russian government.

The other thing to notice when you look back at the service Manafort provided to the Trump campaign is the timing of his involvement. He went to work on the campaign during the time Russian GRU intelligence agents were hacking the servers of the Democratic Party and stealing their emails and political secrets. He met with Russian intelligence operatives in Trump Tower in advance of the Russians releasing those stolen emails, and he was running the campaign when the Russians began leaking the emails via WikiLeaks. He was there throughout the convention when Trump got the nomination for president on the Republican ticket, and he wasn’t ousted until Trump was well on his way as a candidate who was on the stump day after day talking about how much “I love WikiLeaks” and taking advantage of the Russian hacking.

The key figure who apparently tipped off Muller’s prosecutors that Manafort was lying to them during his agreement to cooperate was his former partner, Rick Gates. He was the deputy campaign chairman under Manafort and remained with the campaign after Manafort left. He was in constant contact with Manafort during the campaign and was present for the meeting with Kilimnik at the “Havana Room.”

But Gates clearly wasn’t inside the room every time Manafort as campaign chairman met with candidate Trump. That’s the big secret Manafort is keeping for Trump. The only two men who know what transpired between campaign chairman and candidate during the campaign are Manafort and Trump. Manafort was Trump’s cut-out to Putin’s intelligence operatives who were hacking the Democrats’ emails and releasing them through WikiLeaks. They obviously used the campaign polling data Manafort passed to Kilimnik in determining when to release information damaging to Hillary Clinton and her campaign chairman, John Podesta. Only Manafort knows what instructions Trump gave him when he was dealing with the Russians during the campaign, and so far, he is keeping this very, very big secret.

Most pundits think Manafort is counting on a pardon from Trump before he is impeached or leaves office by losing the election of 2020. Trump can certainly do this. He has a real interest in keeping Manafort’s mouth shut because Trump has created the fiction that he beat Hillary Clinton in 2016 fair and square without the help of the Russian government, and he’s not going to easily let this fiction be credibly challenged. It would be too much of a blow to his ego, even after he has left office. Manafort could blow up Trump’s lies about the 2016 campaign. Trump will do anything to keep him quiet. Dangling a pardon insured Manafort would lie to Mueller even under a plea agreement.

A pardon might not be enough to insure Manafort’s loyalty over the long term, but money will. Remember the revelations during his trial about the millions he laundered through banks in Cyprus and how he spent it? Six hundred grand for landscaping his house in Bridgehampton! Five hundred grand for fancy suits from men’s clothing stores! Hundreds of thousands on Persian rugs! He owned houses in the Hamptons, Florida, Brooklyn, and a condo in Trump Tower!

Manafort isn’t sitting there in jail in Washington D.C. just waiting on a pardon. He still faces heavy fines for tax evasion. Nearly every asset he ever owned has been seized. He’s not going to walk out of jail with a pardon and move into a walk-up in Queens. The other party to Trump’s fiction about how he beat Hillary is the Russians, and they don’t want the truth to come out any more than Trump does. Whoever beats Trump in 2020 (if he’s still around to beat) will double or triple sanctions on Russia if the secrets behind Russia’s involvement in Trump’s campaign are ever told. Somebody over there loyal to Putin — Deripaska or Akhmetov or another oligarch — has made promises to Manafort to “make him whole” financially.

Trump will pay off Manafort for his silence with a pardon, and the Russians will pay him off with millions of dollars. That’s why Paul Manafort is sitting in jail in Washington D.C. lying to Robert Mueller’s investigators. He’s always been a dirty-trickster and a fixer, and just because he’s wearing an orange jumpsuit and going gray in the absence of his bottle of black hair dye doesn’t mean he’s stopped trickstering and fixing. Look out, Bridgehampton and Manhattan! Paul Manafort has a big secret and even bigger plans to use it to make his comeback!