Facing 40 and his first MMA fight: Writer Josh Rosenblatt steps into the ring

Salon talks to the author of the memoir "Why We Fight," Jewish athletic identity and the communal fight response 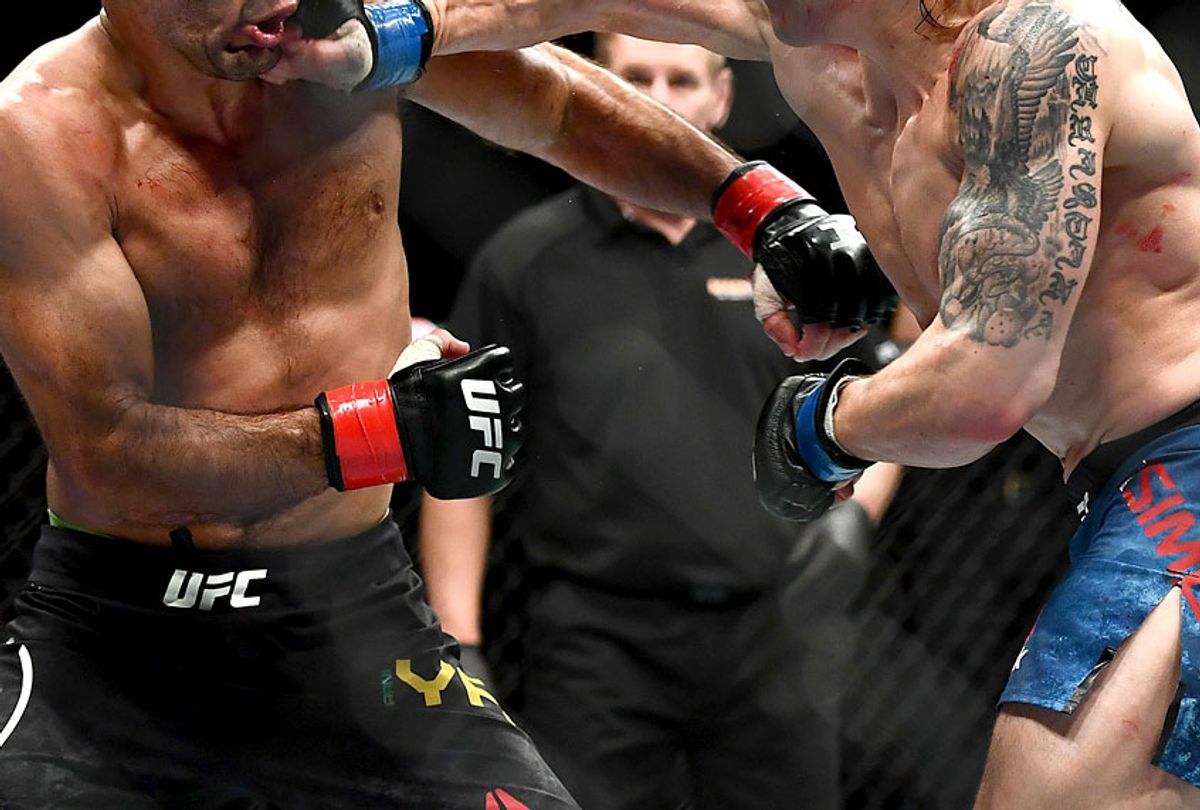 Gonzo journalist Hunter S. Thompson once ridiculed sportswriters by saying that their most important tool was their thesaurus, lest they use the same adjectives over and over again when describing an athletic event. While that may be true in some cases, it most certainly does not apply to Josh Rosenblatt, the former editor-in-chief of Fightland, a mixed martial arts publication produced by VICE Media. In his new book "Why We Fight: One Man’s Search for Meaning Inside the Ring," Rosenblatt takes readers into the journey of his own desire to learn how to be an effective fighter, his experience actually participating in an intense fight and the various reasons why human beings like to watch their own beat each other to a pulp.

It is a book worth reading not only for those who enjoy MMA and other forms of professional fighting, but for those who are baffled as to why such a bloody sport would ever be appealing. And in light of New England Patriots' wide receiver Julian Edelman becoming the first Jewish football player to win the Super Bowl MVP award, Rosenblatt's observations about being a Jewish athlete are also quite timely.

Well, I have been training for a while. I sort of started training to fight about the same time I start writing about fighting and did that for, I don’t know, five or six years. Then I had been the editor-in-chief and the founding editor of Fightland, which was Vice magazine's mixed martial arts website. When I was 39, I got fired from that job and I just . . . I felt like I needed to do something that was significant. I was about to turn 40 and I had just sort of lost my dream job and I wanted to do something that was meaningful to me.

It just so happened that I had been training all this time and kind of felt like this might be my last chance to actually fight a fight because I was getting up there in age and it felt like the time had come. And at the exact same time, I was looking for a writing project that was significant to me, and this seemed to dovetail together perfectly: fighting a fight which was so emotionally significant to me, and tie that into what would be the most difficult and hopefully most fulfilling writing opportunity I ever had.

What did you learn about the psychological factors that make people both enjoy participating in fights and enjoy watching them?

It’s a great source of transformation and it’s a great way to create sort of a new life for yourself. Again, having come out of a life of passivity and really not be physically active and definitely not ever having been in a physical confrontation before,  it was like a button you can press to a whole different world. And for me it was 180 degrees in the opposite direction from where I’d been living up to that point. It was the source of liberation, when I came down to it and when you come to think of fighting in terms of hurting another person. It was something to liberate myself.

Now as a Jewish person — and by the way, I am Jewish myself — there are certain stereotypes about Jewish athletes that sort of create a cultural disincentive for Jews to become athletic. Did you encounter any of that either internally or when other people were talking to you about your fighting ambitions?

Nothing externally, but there’s a lot of talk within my own head about my Jewishness and the relationship between being Jewish and being a fighter. I didn’t think about it so much in terms of what Jews are capable of or what they’re known for or the athleticism of it. For me, it was always a matter of there is always something inside of me, as you know, being raised Jewish in this world, you're always aware of — it’s always somewhere in the back of your mind that your people almost became extinct. I think for my entire life, whether I wanted to admit it or not, or whether I was going to do anything about it or not, I always had fantasies in my head born out of that knowledge: One, [I] could be an Indiana Jones, in a way, and beat up as many obstacles as I possibly could; and two, where words got a bit poetic and ridiculous, redeem what I saw — improperly — but what I couldn’t help seeing,  in some ways as a stereotype, about our people as being victims.

It wasn’t a primary motivator for why I was [training], but I know that it was always there. That’s always running at the back of my mind, even before I started fighting, that there was always something about being Jewish that I did not want to associate with being a victim, but I wanted . . . I like the idea that there were Jews, and that I could be a Jew, that fought that.

That’s very interesting. Do you have thoughts about Julian Edelman being the first Jew to win the Super Bowl MVP award?

I didn’t really know so much about football and then I watched the game and they were saying that. I have to get it straight. I think I’m a multiculturalist. Absolutely. I love when people totally belie expectations of probably even more than fighting, people probably don’t think of Jews as football players. That was a pleasant surprise.

Now, when you finally stepped into the ring for the first time, what was that like psychologically? What was going through your head? You spent your entire career writing about this and now, it was about to become a reality, a literally physical reality for you. What was that experience like?

Yes, it was actually surprising. I sort of assumed that I would be terrified. I mean, again, I had never been in a real fight. I’d sparred many times and I’d been training for it. It’s a very difficult thing to stand there, half-naked in a cage, surrounded by people you don’t know, and there’s a guy across the right who you’ve never met before, who wants to cause you harm. It’s a very different psychological state than sparring; even the hard sparring session is a very different thing.

I just sort of assumed, OK, I’m going to be terrified. I mean, I should be terrified and I’ve resigned myself to that. I hope it won’t manifest itself as paralysis or me running away. But I was prepared to be completely terrified.

Surprisingly enough, I was remarkably calm. I got into the cage and I’m standing there and my opponent is standing across of me and they’re announcing our names, and a sort of weird calm came over me. I don’t ascribe it to anything spiritual, it was just a sort of sense of resignation like, I got myself into this, I’ve been thinking about this for a year, I’ve been training for this for more than that time, I can’t get out of it, I might as well do it.

Up to this day, I’m very surprised that I was not more terrified than I was.

Do you plan on stepping into the ring again?

I don’t think so. I still train and I still spar, but I think for two reasons I’d probably won’t get back in the ring. One is that it was kind of a perfect experience, from how I experienced it to the outcome of the fight, everything about it, and I couldn't have written the story any better. It was just a really transcendent moment in my life. I think that expecting a replay of that, to approximate that at all, over to be anything like that all, I will be chasing a ghost.

The other thing is that I saw the way my wife responded to the fight. I talked to my mother afterwards, who couldn’t even watch the fight. She was supposed to watch it online. She couldn’t watch it.

I’d been so cloistered on the way in and so, so focused that I, for the first time, realized what a terrible thing it is to put somebody you care about through a fight like that. I kind of made a deal with my wife that there will be that one time because I needed to have that experience, but I don’t want to put her through that again.

Now, in terms of the psychology why we like watching other people fight, what would be your theories? What did you learn specifically from being in a fight yourself, as to why this is an appealing experience for observers, for members of the audience?

I think that I developed some thoughts over time watching, because I watched for all those years and had friends who watch, but it wasn’t until I fought and I talked to my friends who came to watch that I got a sort of a different sense of things or maybe a confirmation. Because pretty much everyone who came to see me fight, they don’t know anything about MMA, they’re not interested in MMA, they wouldn’t have gone into a fight under any other circumstances, and I watched the videos that they shot on their phone, and I heard them talk about it later and just this sorts of visceral thrill and the sense of . . . it leaves sort of a communal experience.

There’s something about fighting when you could see past the obvious and totally reasonable moral issues involved over fighting. But you can sort of let yourself see past that. There is some visceral connection we have to watching people put themselves on the line like that, in a way that we can understand. We may never have been in a fight ourselves, but I think we can all probably carry with us some sense of what it would be like to get hit and to be angry enough to hit back. I really believe that watching a fight, when done with sort of an open mind, that pretty much everyone and anyone can connect with it.